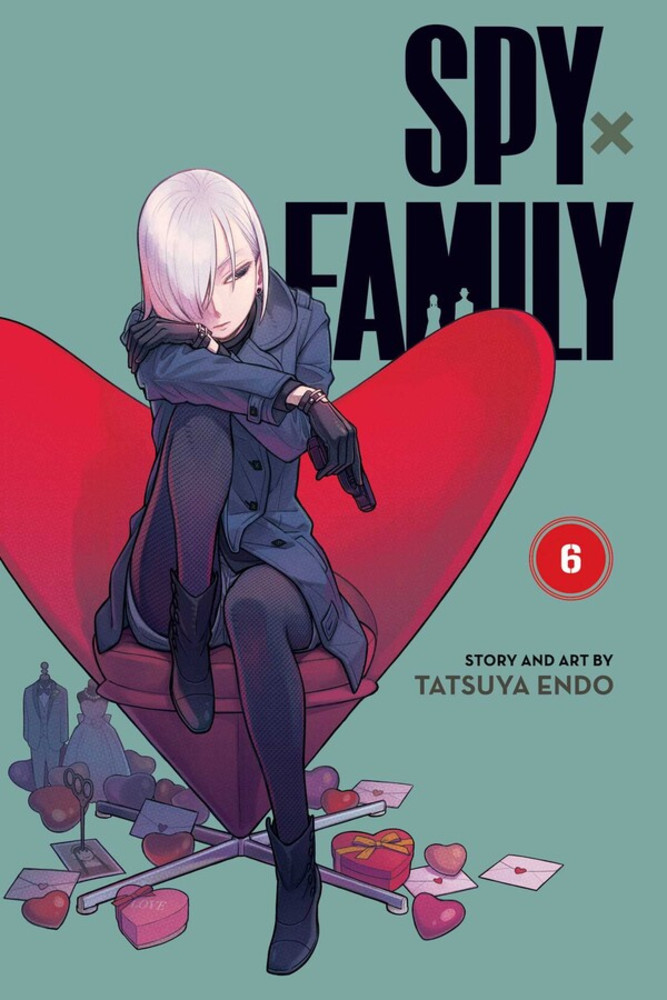 April sales figures are in, and manga continues to dominate the NPD Adult Graphic Novels list. Though the list includes some perennial favorites–Berserk, Demon Slayer, My Hero Academia—Spy x Family saw a big jump in sales after its anime debuted on Crunchyroll last month. ICv2’s Brigid Alverson points out that  “April marks the fourth consecutive month that manga has completely filled the chart of the top 20 Adult graphic novels in the book channel.” Manga sales aren’t quite as robust in comic book stores, but three titles made ComicsHub’s Top 20 Graphic Novels for April: Chainsaw Man (4), Kaiju No. 8 (16), and Spy x Family (20). For additional insights into the current state of the manga, check our Madeline Dunnett’s recent post at Anime News Network.

With less than three weeks to go, Sam Sattin and Guruhiru’s Kickstarter campaign for Unico: Awakening has exceeded its pledge goal of $50,000. The story is “an homage to the God of Manga’s original messaging of social welfare and eco-consciousness.” [Kickstarter]

Good news for Moto Hagio fans: Fantagraphics will be re-printing the first volume of The Poe Clan this summer. While there’s no official release date for the new edition, the long-awaited second volume will be released on July 26, 2022. [Fantagraphics]

Earlier this week, Yen Press announced that it will publish Sho Harusono’s Hirano and Kaguira, a spin-off of Sasaki and Miyano. [Yen Press]

Brace yourself: Seven Seas just announced even more new manga licenses! Among the most promising are Polar Bear Café: Collector’s Edition and Ex-Yakuza and Stray Kitten, which is pretty much what it sounds like: a former mobster indulges his softer side by rescuing a cat from the streets. [Seven Seas]

Over at The OASG, Justin and Helen round up the latest anime, manga, and licensing news. [The OASG Podcast]

Patricia Thang takes issue with the marketing label “manga-inspired,” arguing that “To call a comic ‘manga-inspired’ is akin to me saying, ‘Here’s a painting I did! It’s art-inspired! You’d think (or at least hope) I was joking, right? Because what in the fuck would that even mean?!” [Book Riot]

On the most recent Manga in Your Ears podcast, Kory, Helen, and Apryl dissect two manga by Naoki Urasawa: Sneeze, a short story anthology, and Asadora!, his latest series. [Manga in Your Ears]

The Mangasplainers turn their attention to Kakegurui: Compulsive Gambler, “the smash hit seinen manga that pits trust-fund-teens against one another in battles that cause embarrassment and ecstasy, skirting the line between schadenfreude and sadism!” [Mangasplaining]

Wondering what to read after Black Clover wraps up later this year? Christian Markle has a few recommendations. [Honey’s Anime]

Brianna Lawrence argues that Death Note Short Stories is more than just a sequel or a companion to the original series; it’s a thoughtful exploration of “how the government would react if such a terrifying weapon was available.” [The Mary Sue]

In an interview with TCJ’s Alex Deuben, Ken Niimura discusses his latest work, Never Open It: The Taboo Trilogy, which re-tells three of Japan’s most famous folk tales. “What I like about these stories… is that they’re pretty open ended,” Niimura explains. “They can be interpreted in many different ways. For example, there’s what’s considered to be the standard version of ‘The Crane Wife,’ but there are actually different versions depending on the region, the era, with many differences to the characters, the ending, etc…” [The Comics Journal]

Readers in search of “hallucinogenic” stories might want to check out Keiichi Koike’s Heaven’s Door: Extra Works. “In some of these stories, the scale is pure Akira, but the detail and fluidness of the line are absolutely Moebius,” reviewer James Hepplewhite opines. Speaking of over-the-top manga, Megan D. revisits one of the most ludicrous series Tokyopop ever published: The Qwaser of Stigmata. (No, really; this manga goes to eleven.)

Since its debut in Bessatsu Shōjo Comic, Moto Hagio’s The Poe Clan has proven almost as enduring as its vampire protagonists, living on in the form of radio plays, CD dramas, a television series, a Takarazuka production, and a sequel that appeared in Flowers forty years after the series finished its initial run. The Poe Clan’s success is even more remarkable considering that Hagio was in the formative stages of her career, having made her professional debut just three years earlier with the short story “Lulu to Mimi.” Yet it’s easy to see why this work captivated female readers in 1972, as Hagio’s fluid layouts, beautiful characters, and feverish pace brought something new to shojo manga: a story that luxuriated in the characters’ interior lives, using a rich mixture of symbolism and facial close-ups to convey their ineffable sorrow.

The Poe Clan‘s principal characters are Edgar and Marybelle Portsnell, the secret, illegitimate children of a powerful aristocrat. When their father’s new wife discovers their existence, Edgar and Marybelle’s nursemaid leads them into a forest and abandons them. The pair are rescued by Hannah Poe, a seemingly benevolent old woman who plans to induct them into her clan when they come of age. The local villagers’ discovery that the Poes are, in fact, vampirnellas (Hagio’s term for vampires) irrevocably alters Hannah’s plans, however, setting in motion a chain of events that lead to Edgar and Marybelle’s premature transformation into vampirnellas.

Though my plot summary implies a chronological narrative, The Poe Clan is more Moebius strip than straight line, beginning midway through Edgar and Marybelle’s saga, then shuttling back and forth in time to reveal their father’s true identity and introduce a third important character: Alan Twilight, the scion of a wealthy industrialist whose confidence and beauty beguile the Portsnell siblings. In less capable hands, Hagio’s narrative structure might feel self-consciously literary, but the story’s fervid tone and dreamy imagery are better served by a non-linear approach that allows the reader to immerse themselves in Edgar’s memories, experiencing them as he does: a torrent of feelings. Furthermore, Hagio’s time-shifting serves a vital dramatic purpose, helping the reader appreciate just how meaningless time is for The Poe Clan’s immortal characters; they cannot age or bear children, nor can they remain in any school or village for more than a few months since their unchanging appearance might arouse suspicion.

Hagio’s artwork further reinforces the dreamlike atmosphere through inventive use of panel shapes and placement, with characters bursting out of frames and tumbling across the page, freeing them from the sequential logic of the grid. In this scene, for example, Hagio uses these techniques to depict an act of impulsive violence—Alan pushes his uncle down a flight of stairs—as well as the reaction of the servants and relatives who bear witness to it: 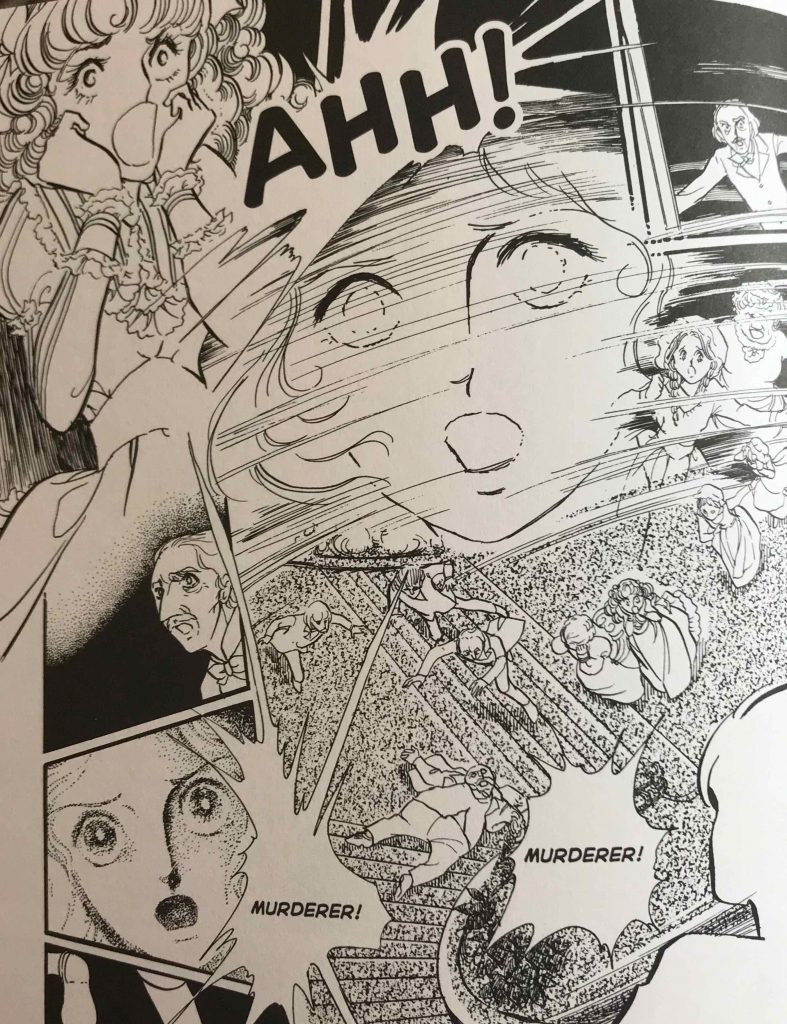 While the influence of manga pioneers like Osamu Tezuka and Shotaro Ishinomori is evident in the dynamism of this layout, what Hagio achieves on this page is something arguably more radical: she uses this approach not simply to suggest the speed or force of bodies in motion, or the simultaneous reactions of the bystanders, but to convey the intensity of her characters’ feelings, a point reinforced by the facial closeups and word balloons that frame the uncle’s crumpled body.

Her method for representing memories is likewise artful. Through layering seemingly arbitrary images, she creates a powerful analogue for how we remember events—not as a complete, chronological sequence but a vivid collage of individual moments and details. In this passage, Hagio reveals why one of Edgar’s schoolmates has confessed to a theft he didn’t commit: 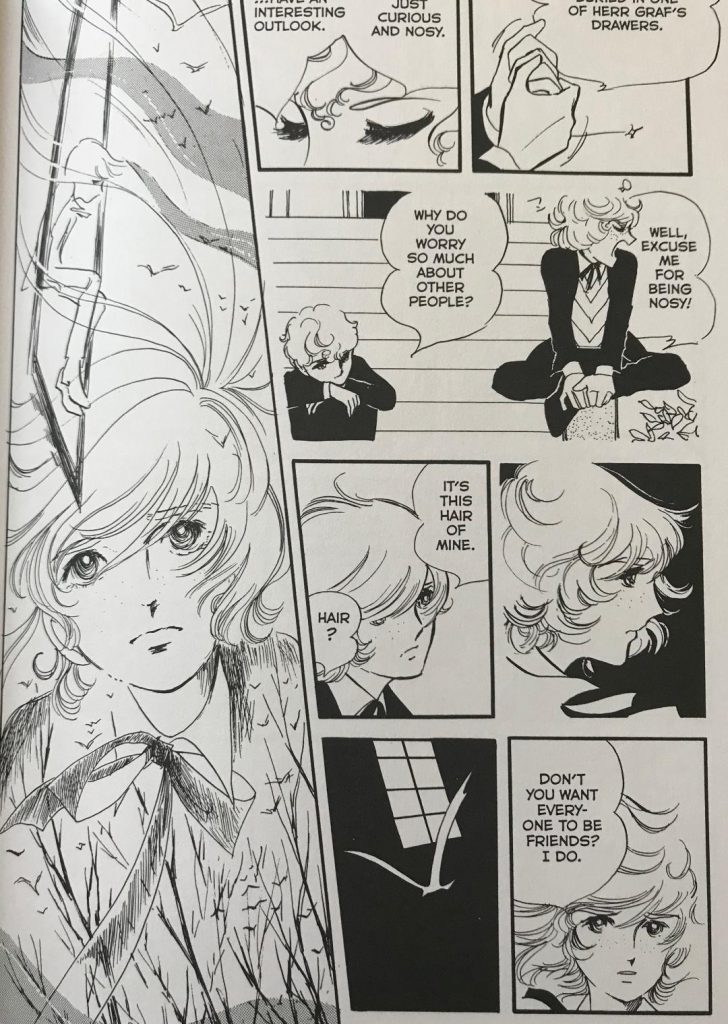 The final frame of this passage reveals the source of Killian’s pain: he witnessed another boy’s suicide. But Killian isn’t remembering how the event unfolded; he’s remembering the things that caught his eye—birds and branches, feet dangling from a window—and his own feelings of helplessness as he realized what his classmate was about to do.

As ravishing as the artwork is, what stayed with me after reading The Poe Clan is how effectively it depicts the exquisite awfulness of being thirteen. Alan, Edgar, and Marybelle feel and say things with the utmost sincerity, so caught up in the intensity of their emotions that nothing else matters. Through the metaphor of vampirism, Hagio validates the realness of their tweenage mindset by depicting their existence as an endless cycle of all-consuming crushes, sudden betrayals, and confrontations with hypocritical, dangerous, or bumbling adults. At the same time, however, Hagio invites the reader to see the tragedy in the Portsnells’ dilemma; they are prisoners of their own immaturity, unable to achieve the emotional equilibrium that comes with growing up.

One final note: Fantagraphics deserves special praise for their elegant presentation of this shojo classic. Rachel Thorn’s graceful translation is a perfect match for the imagery, conveying the characters’ fervor in all its adolescent intensity, while the large trim size and substantial paper stock are an ideal canvas for Hagio’s detailed, vivid artwork. Recommended.

This post was updated on August 23rd with more accurate information about the current status of The Poe Family‘s serialization in Flowers. Special thanks to Eric Henwood-Greer for the correction!