Just a word to the wise: it’s impossible to discuss either Neverland or Spoon without divulging a few plot details, so be mindful if you’re the kind of person who hates–HATES–spoilers. Caveat lector! 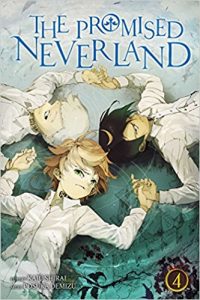 One of the pleasures of reading The Promised Neverland is its crack pacing: Kaiu Shirai and Posuka Demizu have a knack for the perfectly timed reveal and the pulse-pounding action sequence. Volume three was a rare misstep for the series, saddled with too many contrived plot twists, but volume four is a return to form, briskly setting the kids’ escape in motion. The story occasionally flags when Emma, Ray, and Norman explain the finer details of their plan to one another, but these moments serve an essential dramatic purpose, helping us appreciate how perilous their journey will be. These conversations also remind us how much the principal trio rely on one another for emotional support, a point driven home by the authors’ decision to sacrifice one of the main characters. (And I mean a main character, not a red shirt.)

Perhaps the most surprising thing about The Promised Neverland is its feminist subtext. In the final pages of volume three, Krone reveals that the brightest orphan girls are groomed for house mother positions. The full horror of this arrangement, however, only becomes apparent in volume four. In a few suggestive images, Demizu vividly conveys the grotesque sacrifices that Gracefield Manor’s female residents make in order to survive their twelfth birthday. A brief interlude set in a factory evokes the grim spirit of The Handmaid’s Tale, imagining a world in which young women are cruelly exploited for their fertility, then coerced into perpetuating the very system that oppresses them.

I know — I’m making The Promised Neverland sound like Terribly Serious Reading, but rest assured it isn’t. The story is, at bottom, a juicy prison drama in which the jailers are actual monsters and the prisoners pint-sized MacGuyvers. Though the subtext enriches the narrative, inviting multiple readings, the story never feels like an obvious parable about factory farming or reproductive rights. Recommended. 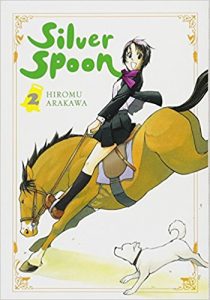 After an introductory volume in which Hachiken (a) fell face-first into poop (b) insulted his classmates repeatedly (c) joined the equestrian club just to impress a girl and (d) realized that the piglet he was raising would soon be bacon, volume two affords him a rare moment of grace. The students’ discovery of an abandoned brick oven prompts them to make pizza — something only Hachiken knows how to do. The act of cooking for so many people forces Hachiken to improvise, rather than plan, forcing him outside his academic and social comfort zone — and making his brief turn in the spotlight even more satisfying.

Lest Hachiken’s triumph seem a little too tidy, the rest of volume two sees him reverting to bumbling city slicker, as he gets lost in the woods looking for cell phone reception, gags at the sight of a newborn calf, and, yes, falls face-first into another pile of manure. Hiromu Arakawa sells these moments with her trademark over-the-top reaction shots; no one can distort or bend a human face with the same verve as Arakawa, who turns every setback, humiliation, and surprise into an opportunity to draw rivers of snot and tears. Though she excels at slapstick, Arakawa tempers the jokes with moments of real drama that make Hachiken realize just how much Komaba and Mikage’s families struggle to keep their modest dairy farms afloat. It’s these quieter moments that remind us just what a capable storyteller Arakawa really is, and make Silver Spoon more than just a gag manga with farm animals. Recommended.

The first volume of The Promised Neverland was a masterclass in how to launch a series: the plotting was intricate but the brisk pacing and well-timed twists prevented an exposition-heavy story from sagging under the weight of its own ambition. Of necessity, volume two unfurls at a slower clip than the first, as the principal trio of Emma, Ray, and Norman work through the logistics of escaping Gracefield Manor, weighing the pros and cons of each element in their intricate plan. Kaiu Shirai also expands the cast to include other stakeholders, dedicating several chapters to Krone, Mother’s new subordinate, and Don and Gilda, two high-achieving students who haven’t yet learned the true purpose of Gracefield Manor.

These character moments are one of the great strengths of volume two. Krone, for example, turns out to be more resourceful than we might have guessed from her brief introduction in volume one; Shirai and Posuka Demizu use a woodland game of tag to reveal Krone’s formidable strength, speed, and cunning, establishing her as yet another major obstacle to escape. In other passages, Shirai peels away the outer layers of her principal characters, complicating the reader’s understanding of who they are, what motivates them to escape, and with whom their true allegiance lies — a necessary corrective to the first volume, which portrayed Emma, Ray, and Norman as just a little too smart, too capable, and too thoughtful to fully register as twelve-year-olds.

Volume two hits an occasional speed bump when characters discuss the escape plan. One overly deliberate scene, for example, finds Roy and Norman in full Scooby Doo mode, explaining how they figured out there was a mole among the residents. And volume two’s physical depiction of Krone is, frankly, uncomfortable, as some of her facial features have been exaggerated in ways that recall the iconography of blackface minstrelsy. Despite these lapses, The Promised Neverland remains suspenseful thanks, in no small part, to Demizu’s brief but horrific dream sequences; these suggestive images — a swirl of bodies, teeth, and monstrous eyes — provide a potent reminder of what’s at stake if the kids don’t escape Mother’s clutches.

The Promised Neverland by Kaiu Shirai and Posuka Demizu

This series is one of more intriguing debuts that I’ve read from the Shonen Jump line in a long time. It is also a very difficult series to write about due to a pretty dramatic plot twist that happens around 40 pages into the manga, but I’m going to be deliberately vague and avoid spoilers.
The series opens with a semi-idyllic portrayal of life in an orphanage in what looks like a non-specific European country. Emma, Norman, and Ray are some of the oldest orphans, and each is gifted with some special talents. Emma is a tremendous athlete, Norman is incredibly smart, and Ray is a strategic thinker who is constantly honing his powers of observation. The orphans are cared for by a woman named Mom, who they all love as the only adult in their lives. As the first few pages unfold, small details in the art start to unsettle the reader. Why do all the orphans have numeric sequences tattooed on their necks? Why do they all have to dress in white? Why are they subjected to what looks like insanely detailed IQ tests in the morning, and then given the freedom to roam around the woods that surround the orphanage in the afternoon?

The orphans make a discovery that causes them to question the environment that they’ve been raised in, and their unique personalities and perspectives cause them to band together to start to assess their situation and develop a plan of action. While Emma is smart, one of the greatest things she brings to the team is moral clarity and a sense of urgency. The two boys are more cerebral, with Norman being more book smart, and Ray serving as a mastermind who is initially focused most on what is practical to accomplish. This volume focuses mainly on the orphans testing their assumptions and working together to figure out how The Promised Neverland doesn’t really live up to the fairy-tale aspects of the title. The art in the series features faces that are a but smushy, but very expressive of emotion. Emma’s hairstyle looks like a reference to Duck in Princess Tutu, so I found that amusing. The Promised Neverland is incredibly dark, but seeing how resourceful the orphans are brings an element of hope into play for the reader. The first volume of the series easily draws the reader into the sinister world the orphans are resisting. Extremely entertaining, and I’m already impatient for the next volume. 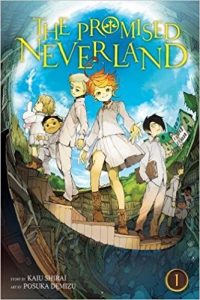 Crack pacing, crisp artwork, and a shocking plot twist in chapter one — those are just three reasons to pick up The Promised Neverland when it arrives in comic shops on December 5th. The first volume is a masterful exercise in world-building, introducing the principal characters and the main conflict in a few economic strokes, avoiding the trap that ensnares so many fantasy authors: the info-dump introduction. Instead, the writer-artist team of Kaiu Shirai and Posuka Demizu allow the reader to figure out what’s happening by revealing important plot details as the characters uncover them, and letting the artwork establish the setting. That makes the very earliest pages of the story flow more like a rollercoaster than a Star Wars screen crawl, making every page turn feel like an urgent necessity.

The story begins at Grace Field House, an orphanage plucked from a Victorian novel: the main building is a homey Tudor villa that’s surrounded by open meadows and lush forest, perfect for a game of tag. Our first hint that something is amiss comes just six pages into the story, as Emma, the narrator, makes a mental note of all the things she’s grateful for: “a warm bed, delicious food” and “an all-white uniform.” Before we can ponder the significance of the uniform, however, Demizu inserts a panel revealing that every resident of Grace Field House has a number tattooed on her neck, a sure sign that the orphans are more prisoners than temporary wards: 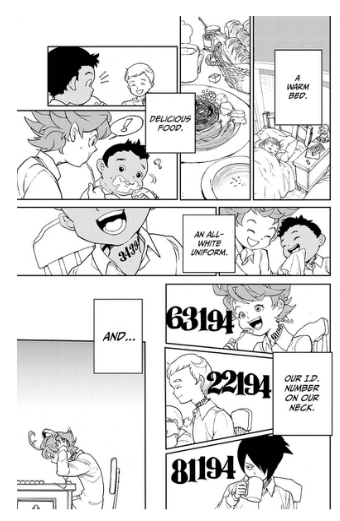 A smattering of other clues — including a series of daily IQ tests and a fence encircling the property — reinforce our perception that Emma and her friends Roy and Norman are in grave danger. And while the earliest chapters occasionally bow to Shonen Jump convention with on-the-nose narration, it’s the artwork, not Emma’s voice-over, that makes each new revelation feel so sinister. Consider the panel that introduces the testing ritual: 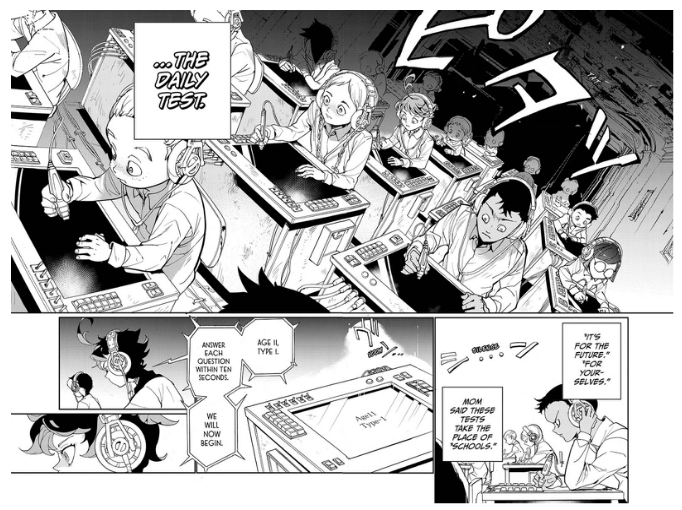 In the first ten pages of the story, Demizu uses little to no shading to create volume or contrast, instead depicting the setting and characters through clean, graceful linework. The image above, which appears on pages 12-13, is the first time that we see such a dramatic use of tone; the students at the back of the frame look like they’re being swallowed by a black hole, while the students at the front sit under a klieg light’s glare. Demizu’s subsequent drawings are more restrained than this particular sequence, but her artwork becomes more detailed and complex than what we saw in the story’s first pages — it’s as if the setting is coming into focus for the first time, complicating our initial impressions of Grace Field House as a place of refuge.

I’m reluctant to say more about the plot, since the first chapter’s spell loses some of its potency if you know the Big Terrible Secret beforehand. (If you absolutely, positively must know what happens, Wikipedia has a decent, one-paragraph summary of the premise.) By the time Emma, Roy, and Norman realize the real purpose of their incarceration, however, the basic “rules” of the Promised Neverland universe have been firmly established, and the characters fleshed out enough for us to care whether they succeed in escaping. More importantly, the lead trio are smart and capable without seeming like miniature adults, making their likelihood of success seem uncertain, rather than preordained. That element of suspense may be difficult to sustain for 10 or 20 volumes, but hot damn — volume one is a nail-biter. Count me in for more!

Volume one debuts on December 5th in print and ebook form. Chapters 1-3 are available for free on the VIZ website; the story is currently being serialized in the English edition of Weekly Shonen Jump.