I had three posts for you all last week here at Experiments in Manga. First was the announcement of the Love Hina Giveaway Winner which also includes a brief list of some of the harem and reverse harem manga that have been licensed in English. I also posted July’s Bookshelf Overload. I managed to restrain my impulse buys over the last month (for the most part). And finally, I reviewed Frederik L. Schodt’s The Astro Boy Essays. I actually haven’t read or watched much Astro Boy, but Schodt’s book is a fantastic introduction to Astro Boy and Osamu Tezuka.

Many boys’ love fans celebrated “Yaoi Day” on August 1st, or 8/01. (With a little Japanese wordplay, 801 can be pronounced as “yaoi.”) I saw a lot of love for est em last week, and for a good reason–she’s a fantastic creator. Jocelyne Allen translated and posted a portion of her interview with est em from 2010 at her site Brain Vs. Book. Over at Otaku Champloo, Khursten Santos had a special spotlight on est em. And, while not part of the yaoi day celebrations, Jason Thompson’s House of 1000 Manga featured est em a few weeks back.

Also! The call for participation for August’s Manga Moveable Feast has been posted! Later this month the manga blogging community will be taking a closer look at Eiji Ōtsuka and Housui Yamazaki’s The Kurosagi Corpse Delivery Service.

Fist of the North Star: Master Edition, Volumes 7-9 written by Buronson and illustrated by Tetsuo Hara. Gutsoon Entertainment was only able to publish nine volumes of Fist of the North Star before going defunct. I would absolutely love to see more of the series available in English. When I first started reading Fist of the North Star, it seemed like the series was heading towards a bad-guy-of-the-week sort of story. This isn’t necessarily a bad thing, but I was very happy to see it evolve an engaging overarching plot. Plus, I love the gloriously over-the-top martial arts. These last few English volumes further develop Kenshiro and his brothers’ backstories and introduces one of the primary antagonists of the series.

My Cute Crossdresser by Mitohi Matsumoto. A part of Digital Manga’s new hentai imprint Project-H, My Cute Crossdresser falls into the genre known as otokonoko. Generally written for a male audience, otokonoko features cross-dressing guys, often in somewhat compromising situations (it is ecchi, after all). I quite enjoyed My Cute Crossdresser. For the most part, the sexual content is actually fairly mild. The first and longest story, “Raising Decoy,” in which a guy dresses as a girl to catch gropers on the train in order to bring them to justice, ends up being rather sweet. “Spilled Milk” and “Leo and the Night Sky of Summer” are partially excuses for suggestive crossplay. The collection also includes “An Angel’s Flight” and “Actress.” The volume is fun and even a bit fluffy.

Sexy Voice and Robo by Iou Kuroda. It’s difficult for me to adequately capture my response to reading Sexy Voice and Robo, or to even describe what this manga actually is about. It’s a strange and rather unusual story, but I found it be appealing and immensely enjoyable. Nico, aka “Sexy Voice,” is a bright fourteen-year-old girl who wants to be spy when she grows up, or maybe a fortuneteller. She finds other people intensely fascinating and can’t help but meddle in their affairs, often putting herself in some very dangerous situations as a result. The endearing and hapless “Robo,” who is frequently caught up in her escapades, is one of many men she met while working for a tele-club dating scam.

Tactics, Volumes 1-2 by Sakura Kinoshita and Kazuko Higashiyama. First published by ADV Manga, then Tokyopop, and now available through JManga, Tactics is one of the few manga that I’ve read that takes place during Japan’s Taishō era. Kantarou is a young folklorist who is occasionally called upon to exorcise yokai that are causing problems for people. The plot moves a little too quickly at times and is nearly as hyperactive as its protagonist. The stories tend to be fairly benign even when they include slightly more menacing elements. Personally, I prefer my yokai tales to have a little more bite to them, but there were parts of Tactics that were genuinely fun. I was particularly amused by the tengu Haruka’s extreme attachment to his rice bowl. 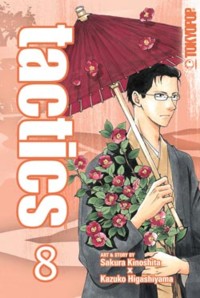 I’ve been plugging away at a post about global manga, but it’s just not coming together quickly, so I’ll take a brief rest to talk about some of the manga I bought at NYAF!

Some volumes are yet unread (Dororo v.1, Galaxy Girl, Panda Boy, Seduce Me After the Show), but here’s a quick rundown on what I’ve plowed through so far.

END_OF_DOCUMENT_TOKEN_TO_BE_REPLACED

First of all, I should apologize to whoever was trying to leave a comment yesterday using Open ID. I have now discovered that the WordPress plugin for Open ID I installed is extremely broken. For now, I’ve just deactivated it, but I do hope to get it working eventually, so people can use that here. I am so sorry for the trouble. I know how irritating it can be to take the time to write up a comment, only to have it disappear into the ether.

To others who may be stopping by due to hits on their site meters: Um, hi. I’ve been adding some folks to my blogroll as I find things that interest me enough to be daily reads. Just trying to clear up the mystery, if there is any. :)

So, I’m know I’m late to the party (as always), but I finally started reading Tokyo Babylon recently, …