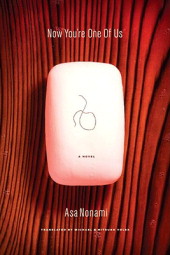 Noriko, the young heroine of Asa Nonami’s Now You’re One of Us, initially thinks she’s hit the marriage jackpot. Not only are her in-laws wealthy and well regarded by their neighbors, they’re also quick to embrace her as a member of the family. Her husband Kazuhito is handsome and utterly devoted; her mother-in-law Kimie, generous and uncritical; and her sister-in-law Ayano, solicitous to everyone in the household, including Kazuhito’s oddly child-like brother Takehami. Even the Shito matriarch, ninety-eight-year-old Ei, welcomes Noriko to the clan by declaring her the family’s “treasure” and “future.”

Shortly after Noriko arrives at the Shitos’ Tokyo home, a strange, slightly disheveled neighbor approaches her while she works in the garden. Though Kimie is quick to dismiss him as a troubled tenant who’s fallen on hard times, Noriko can’t shake the feeling that the neighbor was about to divulge something damning — a feeling intensified by his mysterious death in a fire several days later. The Shitos’ oddly muted, impersonal response to his death further arouses Noriko’s suspicion, as do the family’s clandestine midnight meetings. Though the Shitos offer reasonable, measured responses to Noriko’s inquiries, she begins wondering if the Shitos run an illicit business… or worse.

Thanks to a fluid translation by Michael and Mitsuko Valek, Asa Nonami’s simple, unfussy prose draws the reader into Noriko’s insular world, showing us how a simple girl from a working class family is lured into the Shitos’ web. In this passage, for example, Nonami reveals Kazuhito to be a deft manipulator, appealing to Noriko’s vanity by suggesting that Ei’s endorsement carries special significance:

“Great Granny’s been watching people for ninety-eight years — she can see through them at a glance, so lots of people in the neighborhood come to ask her for advice.” He explained how delighted he was that Great Granny had taken a liking to her; it showed that he hadn’t been blinded by attraction. He felt like the luckiest man in the world for having found someone of whom his family approved.

Unfortunately, Nonami is never content to let a passage like this one stand alone; she feels compelled to explain how Kazuhito’s words swayed Noriko by telling us exactly what Noriko is thinking at the moment he gives this speech. The obviousness of Noriko’s interior monologues is especially frustrating; Nonami does a competent job of revealing her characters’ motivations and feelings through their actions without resorting to such editorial interventions.

The other drawback to Nonami’s storytelling is that she begins telegraphing the ending just a few chapters into the book. Savvier readers will quickly figure out what the Shitos’ secret is — and it’s a doozy — though they probably won’t mind wading through another hundred pages to have their ickiest suspicions confirmed, especially since Nonami manages a few surprises in the final pages.

The bottom line: Now You’re One of Us is an entertaining, atmospheric potboiler that’s probably best read in the privacy of one’s own home.

This review originally appeared at PopCultureShock on 2/8/08.

NOW YOU’RE ONE OF US • BY ASA NONAMI, TRANSLATED BY MICHAEL AND MITSUKO VALEK • VERTICAL, INC. • 240 pp.

VIZ launched its Haikasoru imprint in 2009, with the goal of bringing Japan’s best speculative fiction to the US. Haikasoru’s debut titles — All You Need Is Kill and The Lord of the Sands of Time — introduced Americans to two award-winning sci-fi authors whose work had previously been unavailable in English. As the line as grown, so, too, has the diversity of its offerings, which run the gamut from horror (e.g. Otsuichi’s ZOO) to teen-friendly fantasy (e.g. Miyuki Miyabe’s Brave Story and The Book of Heroes) to science fiction (e.g. Issui Ogawa’s The Next Continent and Hosume Nojia’s Usurper of the Sun). Harmony, the newest Haikasoru title, falls on the softer end of the sci-fi continuum, depicting a world in which “admedistrative” societies — that is, countries that operate by rule of medicine, rather than rule of law — are the new empire-builders.

Harmony takes place in the late twenty-first century, fifty years after nuclear holocaust destroyed North America and destabilized the international balance of power by flooding the Third World with an abundant supply of nuclear weapons. In the chaos that ensued, countries which successfully developed the medical technology to treat radiation sickness supplanted the old superpowers, while less scientifically advanced nations descended into guerilla warfare. The new admedistrative powers transformed the World Health Organization (WHO) into a global peacekeeping force tasked with monitoring other nations’ ability to “ensure their populace a lifestyle that [is] sufficiently healthy and human.” The key to that lifestyle is WatchMe, an elaborate system that keeps close watch over individuals’ health, guiding them away from potentially harmful choices — fatty food, alcohol, cigarettes, distressing literature — repairing cellular damage, and providing the government a steady stream of data about a person’s behavior and current medical condition.

Harmony is told through the point of view of Tuan Kirie, a twenty-eight-year-old WHO agent tasked with solving the mystery behind an “outbreak” of suicide — an action that, in theory, should be impossible under the WatchMe system. Tuan is an appealing narrator, at once tough and funny, a natural contrarian who smokes and drinks and defies authority yet nonetheless treats her mission with the utmost seriousness. The story moves fluidly between past and present, using Tuan’s childhood memories to shed light on her conflicted, often subversive, behavior. Until the third act, the pacing is brisk and the dialogue crisp; as Tuan draws closer to finding out what prompted the wave of suicides, however, the story begins to sag under the weight of turgid conversations about free will and psychology, a flaw that the frequent changes of setting can’t conceal.

It’s a shame these third-act discussions are so pedestrian, as author Keikaku “Project” Itoh has devised a nifty set-up for examining the boundaries between public and private life, imagining a world in which the government’s desire to collect data and enforce civility goes well beyond speech, belief, and association — all manifestations of conscious thought — to the level of neural transmissions and body chemistry. For most of the book, Itoh manages to dramatize the conflict between public and private without speechifying or shortcuts, using Tuan’s role as a WHO agent to explore the nature of admedistrative rule. Though Tuan yearns for the physical and social freedom less technologically advanced societies enjoy, the persistence of armed conflict in the developing world is a potent reminder of why so many people willingly submit to the benevolent totalitarianism of the WatchMe system.

VIZ has done an excellent job of adapting Harmony for English-speaking audiences. Translator Alexander O. Smith, in particular, deserves praise for the smooth, idiomatic voicing of Tuan’s thoughts in language that captures the heroine’s fierce personality. Smith also navigates passages of scientific shoptalk and historical description with ease, producing a highly readable text that lacks any of the tell-tale signs of translation: awkward turns of phrase, confusing use of pronouns.

Aside from a few third-act hiccups, Harmony is a solidly entertaining book, offering a judicious mixture of globe-trotting action, social commentary, and suspense to engage all but the hardest science fiction fans, and a surprise ending that neatly resolves the main plot while raising new, thought-provoking questions. Recommended.

The year is 1955. Twenty-year-old Masayo, an aspiring painter from Hakodate, apprentices herself to Goro Kawabuko, a handsome widower who teaches at a Tokyo art college. In exchange for a weekly lesson, Masayo agrees to keep house for Goro and tutor his daughter Momoko, a strange, withdrawn child whose only companion is a regal white cat named Lala.

Masayo, who comes from a humble background, finds the Kawabuko household enchanting. Or, more accurately, she finds Goro enchanting. Goro epitomizes urban chic, hosting lavish parties, listening to jazz, and wearing the latest Western fashions. Realizing that Goro is beyond her reach, Masayo instead focuses on Momoko; if she can gain the girl’s confidance, perhaps she’ll have a claim on Goro’s heart as well. Masayo must first demonstrate her affinity for Lala, however, as the cat exerts an almost maternal power over Momoko, responding to her mistress’ quicksilver moods with an emotional intelligence that borders on human.

Masayo’s tenure is threatened by the arrival of Chinatsu, a beautiful sophisticate who seems intent on marrying Goro. Chinatsu competes with Masayo for Momoko’s affections, touching off a battle royal between the two women. Watching their struggle unfold, we begin to see through Masayo’s guileless pose: she’s as masterful a manipulator as Chinatsu, using her relationship with Momoko to drive a wedge between Goro and his fiancee:

For a wicked moment, I savored the momentary discomfiture that flickered across the faces of Goro and Chinatsu. Momoko had shown precious little interest in Chintasu; indeed, she had all but ignored her. And then she came running to me. It occurred to me then that aside from Goro, nobody was closer to Momoko than I was. That thought made me feel even more elated.

Like Henry James’s “The Turn of the Screw,” The Cat in the Coffin draws its power from “the strange and sinister embroidered on the very type of the normal and easy,” presenting itself as a domestic drama about a naive young woman who falls for her worldly employer. Yet the book has an oppressive, eerie quality that lends itself to several tantalizing readings: that Lala may be possessed by Momoko’s dead mother, that Momoko herself is a bad seed. By the novel’s end, the reader may believe Masayo’s account of events — and even feel great compassion for her — while questioning her involvement in them.

It’s this level of narrative complexity that elevates The Cat in the Coffin from romantic pot boiler to literature: we’re seduced by Masayo’s modest, self-effacing comments before we recognize that she’s an unreliable witness. One can certainly read The Cat in the Coffin as an atmospheric mystery, but it works on many other levels as well: as a meditation on jealousy, as a young woman’s sexual awakening, as a portrait of life in occupied Japan, as a parody of the Victorian governess novel. I’d love to see Vertical translate more work by Mariko Koike, as she brings an uncommon level of wisdom and literary sophistication to a pulpy genre.

THE CAT IN THE COFFIN • BY MARIKO KOIKE, TRANSLATED BY DEBORAH BOLIVER BOEHM • VERTICAL, INC. • 190 pp.