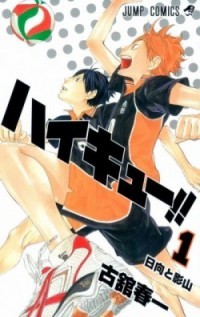 Good news for manga readers: 2013-2014 was the first time since the mid-2000s that the industry enjoyed two consecutive years of sales growth. While the manga market isn’t as red-hot as it was in Tokyopop’s heyday, publishers released almost 800 new volumes in 2014, up 25% from 2013. [ICv2]

At its Friday panel, VIZ Media unveiled a diverse slate of titles that ran the gamut from shonen (Black Clover) to josei (Everyone’s Getting Married). Among the most interesting licenses were two sports manga: Haikyuu!, which focuses on a volleyball team, and Kuroko’s Basketball. VIZ also confirmed that it will be publishing Seventh Garden, Monster Hunter: Flash Hunter, and fan favorite Yona of the Dawn. [Crunchyroll]

Yen Press announced five new manga at NYCC, including an adaptation of Space Dandy and a new series by Yuji Iwahara (Cat Paradise, King of Thorn) called Dimension W. Also joining the Yen line-up in 2016 are Scumbag Loser, a cautionary tale about lying to your peers; Corpse Party: Blood Covered, another entry in the teens-fight-to-the-death-in-an-alternate-universe genre; and Unhappy Go Lucky!, a comedy about a group of unlucky middle-school students. [Anime News Network]

Yen isn’t the only company on the Space Dandy bandwagon: Kodansha Comics will be publishing I Am a Space Dandy!, another manga spin-off of the popular anime. Kodansha also revealed plans to publish the 4-koma Spoof on Titan. [Anime News Network]

At the Crunchyroll panel, the company introduced fans to its newest offerings, which include Arakawa Under the Bridge, a drama by Saint Young Men creator Hikaru Nakamura; Gugure! Kokkuri-san, a comedy about a little girl who inadvertently summons a fox demon; and Cuticle Detective Inaba, a supernatural comedy-thriller about a detective who’s half wolf, half man. (The “cuticle” in the title refers to the character’s pronounced interest in hair. Oh, manga…) [Anime News Network]

In a further sign of manga’s global reach, two companies announced that they would publish comics inspired by a signature title in their catalogs. Kodansha’s Attack on Titan and Dark Horse’s Lone Wolf and Cub 2100 projects will feature original stories by Faith Erin Hicks, Gail Simone, and other creators active in the American industry. [A Case Suitable for Treatment]

Although Vertical Comics did not announce any new manga acquisitions, it did give con-goers a sneak peek at an intriguing new project: audio light novels with music, sound effects, and voice acting. Look for the product line’s debut in spring 2016. [Crunchyroll]

Reviews: Michelle Smith and Sean Gaffney post a new set of Bookshelf Briefs, with short reviews of Assassination Classroom, He’s My Only Vampire, and QQ Sweeper.

Deb Aoki rounds up the major manga news from Anime Expo and San Diego Comic-Con, while Heidi MacDonald and Calvin Reid weigh in on the overall state of the comics industry. The good news: the manga market has rebounded from the late 2000s, when a glut of product and the collapse of Borders forced several publishers to shut down.

Going to Otakon? Ed Chavez hinted that Vertical Comics may have three or four licensing announcements. In other Vertical news, all seventeen volumes of Black Jack are now available in ebook form.

Are you a Dorohedoro fan? If so, keep your eyes peeled for the first issue of Marvel’s Ant-Man: The Last Days; Q Hayashida provided the cover art. (Issue ships on 8/15.)

Justin Stroman talks to several Digital Manga Guild localizers about their experiences–good and bad–working for DMP.

The folks at ALC Publishing have translated Rica Takashima’s article “Japan: Fertile Ground for the Cultivation of Yuri,” which originally appeared in the December 14th issue of Eureka.

News from Japan: Creator Masaya Hokazono (Inugami) just launched Osoroshi Ya (Dreadful Shop), a new website for manga horror enthusiasts. Natsuki Takaya is hard at work on a sequel to Fruits Basket. Beginning September 4th, a new chapter will be posted every week at the HanaLaLa website. The end is near–for Orange, Cross H, and Grendizer Giga, that is.

Reviews: At Kaleo, Henry Ma reviews the latest chapters of Bleach, and offers predictions for the next installment. Ash Brown posts short reviews of After I Win, Alice in the Country of Hearts: My Fanatic Rabbit, and Aquarion Evol.

Morning! Just a quick update before I run out to an early morning meeting (ugh). First of all, I have a short review in this week’s Manga Minis, for volume fourteen of Claymore, a series I like a lot and one of the few shonen series I have reviewed at MR. If you missed my review of volume thirteen back in December, here it is! It was actually my very first review for Manga Recon. Oh, the nostalgia.

Secondly, I just want to take a moment and appreciate Crunchyroll. We originally bought a membership in order to watch new episodes of Shugo Chara!! Doki as they came out, but yesterday we started watching three new series (we’ll probably keep going with two of them) which were being simulcast here at pretty much the same time as in Japan. It was exciting, seriously. I mean, this is what we’ve all hoped for, right? That someone would start to provide legally what was previously only offered by fansubbers–subbed anime available here at the same time (or shortly after) its release in Japan. Hell, I’d have gone for episodes aired even a month or so afterward–that’s still a huge improvement over the years-long wait for dubs I’m not going to watch anyway–but I admit there was something kind of thrilling about knowing we were watching at approximately the same time these episodes were airing for the very first time. Thank you, Crunchyroll, thank you. You are awesome. It’ll be interesting to see how Funimation’s Fullmetal Alchemist streams stack up!