In The Idea of History, author R. G. Collingwood argues that nineteenth-century historians viewed their task in a different spirit than their predecessors. While previous generations of scholars treated history as a simple chain of events, the Romantics wanted to recreate the past through their writings. The Romantic historian, Collingwood explained, “entered sympathetically into the actions which he described; unlike the scientist who studied nature, he did not stand over the facts as mere objects for cognition; on the contrary, he threw himself into them and felt them imaginatively as experiences of his own.”

I found myself revisiting The Idea of History as I read Town of Evening Calm, Country of Cherry Blossoms, a project that might well have resonated with Collingwood’s pioneering nineteenth-century historians in its efforts to “enter sympathetically” into the lives of Hiroshima’s survivors, the hibakusha, a group both pitied and shunned by their fellow Japanese in the years following the 1945 bombing. In the introduction to Town of Evening Calm, manga-ka Fumiyo Kouno explains her approach to the subject in terms that are strikingly similar to Collingwood’s:

I always thought all I needed to know about the bomb was that it was a terrifying thing that happened once upon a time, and a subject best avoided. After living in Tokyo for a while, however, I came to realize that people outside of Hiroshima and Nagasaki didn’t really know all that much about the ravages of the atomic bomb. Unlike me, they weren’t avoiding the subject—they never had the opportunity to learn about it even if they wanted to… I hadn’t experienced the war or the bomb first-hand, but I could still draw on the words of a different time and place to reflect on peace and express my thoughts.

Kouno’s decision to focus on the hibakusha and their descendants makes Town of Evening Calm an immediate, accessible work, one less concerned with recreating a specific historical moment than in imagining what it would be like to rebuild one’s life in the aftermath of that event. It’s a wise strategy, I think, given how difficult it is to convey the horror of war without relying on dramatic devices that can trivialize survivors’ experiences.

Kouno’s approach is not without pitfalls, however. In her review of Town of Evening Calm, Country of Cherry Blossoms, Casey Brienza argues that Kouno portrays her characters as victims of American aggression without acknowledging Japan’s role in precipitating the bombing, a tactic that could be interpreted as a “myopic… preoccupation with [Japan’s] wartime suffering” that “allow[s] the Japanese to forget that they started the war.” At the end of the first story, for example, a woman dying of radiation sickness wonders “if the people who dropped the bomb are pleased with themselves: ‘Yes! Got another one!'” It’s a powerful moment; the character’s comment is shocking in its raw honesty, especially for American readers. It’s an ambiguous moment, too; one could certainly read a note of national self-pity into the character’s words, as she never mentions the war itself, only the suffering caused by the bomb. Yet I think this passage invites a second reading as well, as a very human attempt to make sense of tragedy, to express the character’s understandable need to know why she — a civilian — was subjected to such unimaginable horror, rather than a denial of the suffering caused by the Japanese occupation of Korea, Manchuria, and the Philippines.

In less skillful hands, scenes like these might be mawkish, but Kouno crafts an emotionally authentic story from survivor narratives, deftly moving between present and past to show us how her characters hear the echoes of August 6th in their everyday lives. The first story, “Town of Evening Calm,” focuses on Minami, a young seamstress living in Hiroshima ten years after the atomic blast. Superficially, the city seems to be healing: its downtown is bustling with activity, as is the dressmaker’s shop where Minami works. Yet subtle signs of the devastation remain, from the ramshackle houses of the residential district to the scarcity of everyday goods. (In a particularly effective scene, we see Minami walk home barefoot so as to preserve her only pair of shoes.) Minami herself bears psychic wounds from the day, as is evident in her brusque demeanor with outsiders and her staunch refusal to leave her ailing mother’s side. Underneath her bravado, we see a fearful, guilt-ridden young woman who wonders when she will succumb to the long-term effects of the radiation, who cannot escape her horrifying memories, and who mourns the disintegration of her family. (Her father and sister perished in the blast; her brother was sent to live in Mito, and had yet to return to Hiroshima.) 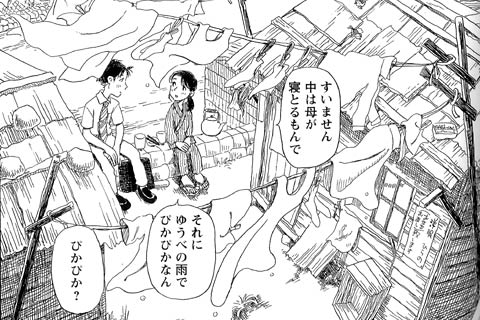 The second story, “Country of Cherry Blossoms,” takes place nearly twenty years later in Tokyo. We first meet Nanami, a baseball-addled tomboy, as an eleven-year-old girl. Through a few telling details–Nanami’s dirty baseball uniform, Nanami’s interactions with classmates–we see that she suffers acutely from her mother’s absence. (Her mother, a hibakusha, succumbed to cancer.) Lacking a female role model, she latches onto Toko, a classmate who epitomizes girly grace. Kouno depicts a few ordinary moments from this odd pair’s childhood: a playground discussion of a homework assignment, a baseball game, a trip to the hospital where Nagio, Nanami’s younger brother, is hospitalized with severe asthma.

We then jump forward seventeen years. Nanami and Toko are estranged; Nagio, now healthy, is training to be a doctor; and Asahi, their elderly father, has been behaving oddly. Fearful that Asahi is losing his faculties, Nanami tails him through the streets of Tokyo, where she bumps into Toko. Their initial conversation is awkward and forced; seeing Toko dredges up some of Nanami’s most painful childhood memories. Toko, undeterred by Nanami’s rudeness, furnishes Nanami with a disguise, and the two set off for Hiroshima, where Asahi seems intent on completing a mysterious errand. As Nanami and Toko follow Asahi, we realize that Asahi is the link between the first and second stories; he is Minami’s “lost” brother, the one who was living with relatives when the Americans bombed Hiroshima, returning only after the death of his sister in 1955.

Kouno’s meticulously detailed illustrations create a strong sense of place, underscoring the contrast between Hiroshima’s orderly new business district and the crowded Aioi Doori neighborhood where the hibakusha live. In the few panels alluding to the actual events of August 6, 1945, Kouno’s art becomes more primitive and stylized, suggesting the horrific effects of the blast by depicting the victims as stick figures with swollen faces. The child-like simplicity and directness of these images are startling yet effective, a reminder both of Minami’s youth at the time of the attack and of the radiation’s devastating ability to rob its victims of their identities by destroying their hair, hands, and faces — in short, the very parts of their bodies that give them their individual appearance. These scenes are notable as well for the skillful way in which present and past co-exist within the same panels; we see the landscape as Minami does, alive with vivid, horrific memories of surviving the blast. 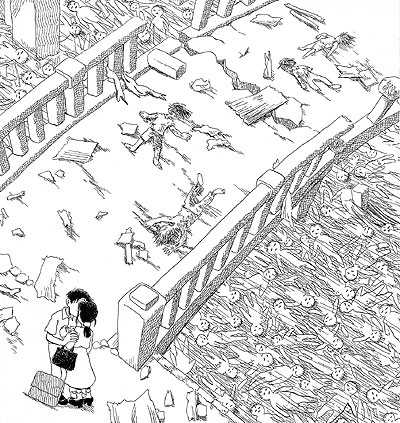 Kouno’s character designs exhibit a similar attention to detail and mood as her landscapes. Nanami, for example, bears a striking resemblance to her aunt Minami, not just in her behavior (Minami shared Nanami’s love of baseball and her brusque demeanor) but also in her facial expressions and carriage; she’s a subtle visual echo of the previous generation. Like all of Kouno’s characters, Nanami and Minami have a slightly rough, clumsy quality to them, with heads and hands that seem just a little too big for their wiry bodies. Yet these awkward proportions don’t detract from the beauty of the work; if anything, the illustrations make Kouno’s characters seem more vulnerable, more imperfect, more fragile—in short, more human and more believable. And that honest vulnerability, in turn, makes it possible for readers from all walks of life to enter sympathetically into Kouno’s haunting yet life-affirming story, to look past the politics of suffering and representation to understand the price that civilians pay in every war.