The Fushigi Yugi universe is one I’ve been following for a long time. Many of my earliest volumes are from the initial Viz release back in the early 2000s, so I felt very nostalgic reading the first volume of the last Fushigi Yugi story 20 years later. While there have been glimpses of Suzuno before in previous series and the anime, seeing an entire series devoted to her seems like a fitting way to finish out the Universe of the Four Gods. 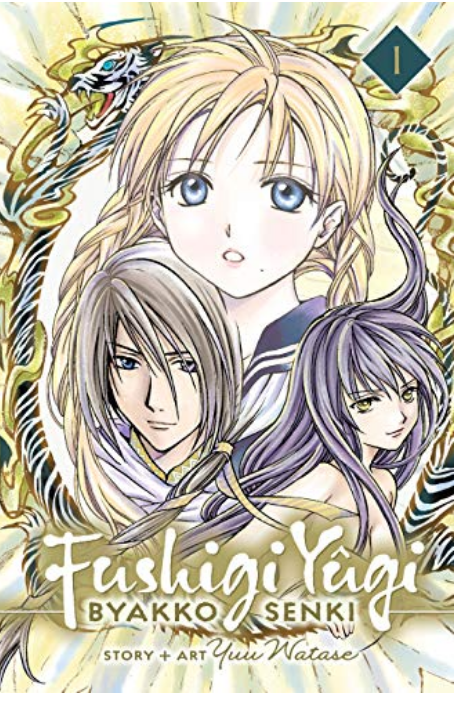 This first volume is structured as a prequel within a prequel, giving the reader insight into Suzuno’s character as both a child and a young adult and setting up an intriguing conflict that I expect to see explored more in future volumes. As Fushigi Yugi: Byakko Senki opens, a young Suzuno is spending time with her parents. Her father has the volume of The Universe of the Four Gods, burdened with the tragic legacy of Takiko Okuda and her professor father. As the Great Kanto earthquake strikes, Suzuno is trapped in her burning house and her father sends her into the book in order to save her life. In the Universe of the Four Gods, Suzuno is clearly unable to fend for herself, but she meets up with some people who are surely going to be pivotal figures in her life – Neiran, a psychologically damaged woman who can turn into a tiger, and the brothers Kasal and Karm. After narrowly escaping being kidnapped, Suzuno travels for a little bit with her new companions who begin to suspect that she might be the fabled priestess of Byakko.

Suzuno travels back to her own world in the aftermath of the earthquake, and the story line shifts to show her as a young woman, quiet and artistic and plagued by enduring visions and memories of what she’s lost. A shy, retiring heroine forced to adapt to a mystical new world isn’t exactly a novel plot point, but the overtones of impending tragedy and Suzuno’s resilience in difficult situations immediately make her an engaging heroine. Watase’s art is always clear and engaging, and I’m looking forward to seeing her portrayal of Suzuno’s mystical warriors and the unique world of the Universe of the Four Gods. This first volume mainly established Suzuno as a fully-fledged protagonist and I’m fairly happy with that pacing even though I put it down feeling a little impatient waiting to get started on the rest of the story. While I think is possible to enjoy this series without reading other Fushigi Yugi stories, I think at minimum someone reading Byakko Senki should be familiar with Genbu Kaiden, and hopefully the main series that started off this 20 year old saga.