The nineteenth century whaler was a tough character. He’d board a ship in Nantucket or New Bedford, sail around the tip of South America and then into the Pacific hunting grounds in quest of sperm whales. Every aspect of his job was dangerous and unpleasant; as author Eric Jay Dolin notes in Leviathan: The History of Whaling in America, crewmen endured “backbreaking work, tempestuous seas, floggings, pirates, putrid food, and unimaginable cold” during their long stints at sea. At the end of a two- or three-year tour, a whaler might still be in debt from all the equipment he’d purchased at the outset of his journey, especially if the ship’s yield was low. Yet the gruesome work he performed was vital to the Victorian economy: whales’ bodies yielded the fat, bones, and oils that illuminated homes, corseted ladies, and gave shine and staying power to paint (Dolin 12).

The characters in Taku Kuwabara’s Drifting Dragons are engaged in a similar enterprise: they trawl the skies in a flying ship looking for dragons. The opening pages of the story make the connection between whaling and “draking” explicit, as we join the crew of the Quin Zaza on an aerial Nantucket sleigh ride. We glimpse a dragon through a parting in the clouds: first its back, then its tail, and finally the entire animal, as enormous and majestic as a blue whale. As the wounded dragon begins to tire, a crew member rappels down the tow line to plunge a harpoon into the animal’s back, delivering the final blow: 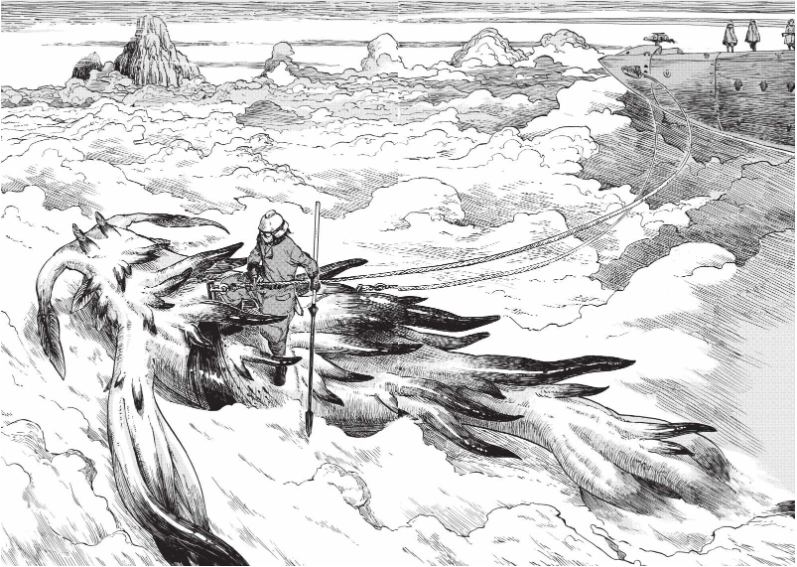 This image is a perfect introduction to draking, simultaneously conveying the peril and thrill of hunting such a powerful, swift animal at high altitude. Kuwabata’s thin, graceful lines and sparing use of screen tone capture the speed of the wind, the texture of the dragon’s skin, and the delicate feathering on the dragon’s ears, but also the vast emptiness of the sky. These details allow us to imagine for ourselves what it would be like to stand astride the dragon’s back, gazing at a mountain peak that’s poking above the clouds, or looking back at the ship and realizing the impossibility of rescue if something goes wrong.

As exciting as the dragon hunting sequences are, Drifting Dragons is as much an exercise in careful world-building as action-oriented storytelling. Kuwabara devotes page after page to the crew’s routines, capturing the heat, smell, and physical labor of stripping meat from bones and rendering fat. He also renders the physical environment of the Quin Zaza in precise detail, from the main deck and crow’s nest to the sleeping quarters and the hold, where most of the butchering, smoking, and boiling takes place. Last but not least, Kuwabara shows us how each member of the crew contributes to the functioning of the ship, and explains what first drew them to the skies.

Though the crew is drawn in broader strokes than the ship itself, the characters are distinctive enough to register as people with feelings, desires, motivations, and frustrations. Kuwabara is generous with his supporting cast, giving each a scene or subplot that reveals an unexpected facet of their personalities. Kuwabara lavishes the most attention, however, on the Mutt-and-Jeff duo of Mika and Takita: he’s a bold risk-taker with little regard for his own safety, while she’s a cautious newbie, eager to learn the ropes and prove her worth.

In trying to make Mika a more fully rounded character, however, Kuwabara depicts him as a swaggering gourmet, an Anthony Bourdain of the air. Mika is always dreaming up new strategies for preparing dragon meat, regaling his shipmates with lengthy monologues about a new technique he tried or goading the Quin Zaza’s cook into making his favorite dishes. This culinary concept carries over to the end of each chapter, which concludes with detailed recipes for Dragon Tail Meat Sandwich, Dragonet alla Diavola, and Pressed Dragon Liver Confit. These interludes aren’t very funny or appetizing; if anything, they feel more like a naked attempt to jump on the weird-cooking-manga bandwagon than an organic part of the story Kuwabara’s trying to tell.

If Drifting Dragons’ efforts at comedy fall flat, the manga is nonetheless engrossing. Kurabawa clearly knows the history of whaling, and has found a clever way to integrate those details into his fantasy world. At the same time, however, the vividness of the world he’s created has its own integrity; one could read Drifting Dragons in blissful ignorance of Moby Dick or The Wreck of the Whaleship Essex and still be swept up in the activity of the Quin Zaza’s crew and the thrill of flying alongside dragons in the clouds. Highly recommended.