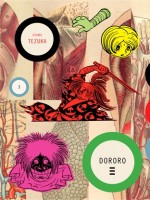 Osamu Tezuka was an extraordinarily prolific and influential creator of manga and anime. So far, only a small fraction of his total output has been released in English. Out of those, one of my personal favorites is his short manga series Dororo. With yokai, an accursed swordsman, and the inclusion of historical elements, I can’t help but like Dororo. Although eventually releasing an omnibus containing the entire series, initially Vertical published Dororo in three separate volumes which earned an Eisner Award in 2009. Dororo, Volume 3, released in 2008, contains the portion of the series that was originally serialized in Japan between 1968 and 1969. It was also during that time period that Dororo went on hiatus. Tezuka abandoned the manga for a year, leaving it without an ending, before returning to it when the Dororo anime series began. The manga was then given a proper conclusion, albeit a much shorter one than was first envisioned. The finale admittedly ended up being a bit rushed, but I love Dororo anyway.

Chased by demons and in turn chasing them down, Hyakkimaru is slowly regaining his forty-eight missing body parts one at a time; each demon he defeats brings him closer to becoming whole. Often it’s not the terrifying supernatural beings that Hyakkimaru must really worry about, though. Humans–with all of their failings, greed, and lust for power–can be just as dangerous as any monster. Hyakkimaru’s father, who selfishly sacrificed his own son’s body in exchange for demonic aid, has become an oppressive warlord. Hyakkimaru isn’t the only one suffering because of his father’s ambitions. The country is being torn apart by war and it’s the farmers and commoners who are being forced to support and fight for leaders they didn’t choose. Dororo, Hyakkimaru’s young traveling companion, also has a family legacy left to deal with. The diminutive thief’s late father was a bandit who amassed a significant amount of wealth. The map to the location of his treasure was tattooed upon his child’s back and now Dororo is pursued by those who want the riches for their own corrupt purposes.

Dororo is one of Tezuka’s transitional works as he began to develop more mature, adult-oriented stories in contrast to his more lighthearted manga generally intended for younger audiences. Dororo addresses serious issues like war and discrimination, but it also incorporates charm, humor, and bittersweet joy. One particular bright spot to balance the darker elements of the series is the titular Dororo. The small thief has led a hard life and can empathize with others and their misfortunes, becoming an exuberant and enthusiastic champion for their causes, while somehow remaining optimistic and cheerful in the face of all the unfairness and tragedy. Hyakkimaru, on the other hand, has an even more dire past than Dororo and has grown weary of the injustices in the world. But the time Hyakkimaru has spent with Dororo as they travel across Japan has changed him. Dororo’s positivity has rubbed off on Hyakkimaru and he has come to care for the youngster immensely. Whether Hyakkimaru realizes it or not, he desperately needed someone like Dororo in his otherwise bleak life.

The relationship that develops between Hyakkimaru and Dororo is only one component of many that makes me appreciate what Tezuka is doing with the series, even if it did end up being truncated. I was initially drawn to Dororo because of Hyakkimaru’s horrifying origin story and his fight to regain what he lost, searching for somewhere to belong and wanting nothing more than to live in peace. His specific situation may be unique, but that desire to be accepted by others is nearly universal. I also liked the supernatural elements in Dororo and how Tezuka slowly shifts the focus of the series to issues more firmly based in reality. The demons and monsters never completely disappear from Dororo, but as the manga progresses the historical influences and more realistic aspects of the manga become increasingly prominent. Among other things, Tezuka’s artwork and storytelling in Dororo takes inspiration from traditional legends and tales, samurai films, and events from Japan’s Warring States period, but he also incorporates his own touches and imagination and pulls it all together in a way that only Tezuka can.

It’s a slower week at Midtown Comics, but Melinda, Michelle, and Sean have no trouble making their picks. See below!

MELINDA: Though I know I need to be reading Kurosagi Corpse Delivery Service (Help me out here, Dark Horse, would ya? I need some digital action on this title. ETA: My apologies to Dark Horse, I’ve been informed they do have this on their iPad app—don’t know how I missed it!) my thoughts this week are all Dororo all the time. I fell in love with this title back when I was still scared to approach Tezuka and nothing could make me happier than to see it get an omnibus release. This is a fairly creepy, action-packed title, but what really drew me in is how freaking moving it is, which was absolutely not what I expected at the time. If you missed this title when it was first released, don’t miss it again. It’s a must-read for any manga fan.

MICHELLE: I’ll chime in to second the Dororo recommendation, and probably for similar reasons: most Tezuka available prior to Dororo daunted me with its Importance, but this shounen adventure story was completely approachable, and therefore a perfect introduction to Tezuka’s oeuvre. I’m happy to see it get a new release!

SEAN: Gosh, what could my pick be? Ahem. My pick this week is the 12th volume of Dark Horse’s horror manga The Kurosagi Corpse Delivery Service. As with most horror manga I read, there’s another reason besides ‘scares’, and that’s the cast. Everyone in this cast is appealing, even the characters with less depth, and they all have a great sense of humor, something needed when you are dealing with corpses all the time. That said, there are a lot of graphically unsettling images in this series as well. It’s not a wacky horror comedy, it’s a wry horror manga with occasional funny lines. As you may have gathered by the fact that it’s been 18 months since the last volume, this is not as best-selling as Gantz or Berserk. Let’s change that, it deserves more love.

For the past couple of days, Comcast has been having one of its too-frequent periods in which its DNS do not know that our domains exist. It’s been difficult to develop the motivation to post, when I know that anyone using Comcast is unable to reach my blog (this includes my mother, how cruel is that?) but I hate to just ignore everyone else. So, those of you who are not Comcast subscribers (or are Comcast subscribers who use Open DNS, like we’re doing right now), this post is for you. ETA: DNS problem solved! Thanks, Comcast!

Lots of people have been posting “Best of” lists for 2008, and I’ve felt too embarrassed to participate much. Since I’m so new to everything, I spent much of 2008 playing catch-up on many great series that the rest of you have been reading all this time, and haven’t really made my way to much that was newly released in 2008. So what I thought I’d do here, is make a list of manga I loved that was new to me in 2008.

This list was interesting to assemble, as I realized that much of the manga I raved over this year, I’d actually begun reading last year (xxxHolic, Fullmetal Alchemist, and Banana Fish, for example), so with those eliminated, here are my Top Five “New to Me” Manga in 2008:

END_OF_DOCUMENT_TOKEN_TO_BE_REPLACED

Most of you know that I’m relatively new to the crazy world of manga. Now, when I get into something, I really get into it, so I’ve read a lot of manga in the short time I’ve been involved with it, but even at my pace, I’ve barely made a dent in the massive amount of material that’s out there and it will be a long time before I’ll feel like I can contribute anything truly meaningful to the discussion of the medium.

One of the things that’s weighed most heavily on me all this time is the fact that I hadn’t read any Osamu Tezuka. The truth is, I was actually kind of scared to do it. I felt really strongly that I needed to read some if I ever hoped to achieve any kind of deep understanding of manga, but I’d seen a few panels of it here and there and I was really concerned that I wouldn’t be able to get into it, which would leave me feeling forever like a hopeless newbie in the manga-reading world, deserving of whatever eye-rolling came my way.