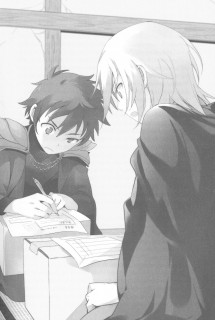 No one is entirely sure who or what Boogiepop is, but there are several rumors and theories among the students of Shinyo Academy. Stories are told about a spirit of death, an assassin who can kill instantly and painlessly. When a number of female students at Shinyo Academy go missing, many naturally assume that Boogiepop must have had something to do with their disappearances. Others believe Boogiepop to be nothing more than a myth or urban legend, but they can’t deny that something very strange and very wrong is going on at their school. Most of the missing girls are written off as runaways by the police and their cases are quickly dropped. And so a few of their classmates take it upon themselves to investigate since they can’t rely on the adults to pursue the matter. But it’s already too late. Some of the girls who have disappeared have lost their lives and there will be even more deaths before those who are responsible can be stopped. If they can be stopped. Any survivors will be left struggling to comprehend everything that occurred at Shinyo Academy.

Boogiepop and Others isn’t told from a single point of view, within a single time frame, or even through a single narrative. Instead, each chapter is seen from the perspective of a different student. Some of the characters are directly involved with the events unfolding at Shinyo Academy while others are only tangentially related. However, none of them know everything about what is going on, though they may have their suspicions. There’s Takeda Keiji, who becomes one of the people closest to Boogiepop, Suema Kazuko, who once was almost the victim of a serial killer herself, Saotome Masami, a deceptively unassuming underclassman, Kimura Akio, one of several boyfriends of one of the missing students, and Niitoki Kei, the president of the discipline committee. They each have their own story to tell, and each version of the events is accurate, but the complete truth can only be understood when all of the individual accounts have been completely disclosed and are then considered and taken together as a whole.

The narrative structure of Boogiepop and Others is actually quite effective in creating and sustaining the mystery and mood of the novel. It’s a slow build as little by little information is revealed and connections are made between characters and their stories. Piecing together everything is an incredibly engaging part of the novel. At times, Boogiepop and Others can be legitimately creepy and disconcerting. The elements of horror in the novel are just as strong as those of science fiction and mystery. Several of the characters are dealing with extreme mental and psychological disturbances and unfortunate family circumstances in addition to the apparent supernatural occurrences. Personally, I preferred Kadono’s exploration of the more reality-based issues over the more outrageous ideas, but in combination even those could be oddly compelling in their strangeness. I thoroughly enjoyed Boogiepop and Others, perhaps even more than I initially anticipated. I definitely plan on reading more of the series.