What if the world ended not with a bang or a whimper, but a shrug of the shoulders and a TL;DR? That’s the question at the heart of Inio Asano’s Dead Dead Demon’s Dededede Destruction, a dark comedy about alien invasion.

Asano buries the lede, however, initially framing his story as a coming-of-age drama about Kadode and Oran, two girls on the cusp of adulthood. We learn about the aliens’ arrival in bits and pieces, through a 2-chan thread, a news bulletin, a string of text messages, and a sign tallying the day’s casualties. We also learn that Kadode’s father — a journalist — disappeared in the immediate aftermath of the attack, an event that has pushed Kadode’s mother to the brink of insanity.

The dramatic impact of these revelations is muted by Asano’s attention to the mundane rhythms of Kadode and Oran’s life: they study for tests, shoot the shit with friends, horse around with Oran’s older brother, and play video games until the wee hours of the morning, marking time until they graduate from high school. Like most teenagers, Kadode and Oran are morbidly curious about sex, fixating on a young teacher who does a poor job of establishing professional boundaries with his students. In private conversations, the girls tease each other about seducing Mr. Watarase, but when Kadode finds herself alone with him, she’s awkward and nervous, unable to carry out her plan. It’s to Asano’s credit that nothing happens between teacher and student, as he recognizes that Kadode’s interest is not in having sex with her teacher but in speculating what it would be like — in essence, she’s trying on the idea of an adult relationship, not actively seeking one.

A similar tension between maturity and inexperience plays out in other aspects of Asano’s narrative. Kadode, for example, is deeply invested in Isobeyan, a manga starring a dim-witted girl and a time-traveling Mushroomian with an “interdimensional pouchette” that yields amazing inventions: a brain bulb, a pair of skeleton specs. Though this manga-within-a-manga offers Asano an opportunity to showcase his technical virtuosity — Isobeyan looks like a Fujiko F. Fujio original — Isobeyan also highlights Asano’s knack for creating convincing teen characters, sympathetically portraying Kadode’s interest in kiddie manga as a survival tactic; she clings to Isobeyan because its jokes and stories offer her the consistency that’s otherwise missing from her chaotic home life.

Running in tandem with these domestic interludes are scenes of the media, government, and big business co-opting the invasion through incessant television coverage, carefully orchestrated public memorials, and merchandise, all promoting the idea that Tokyo should “never forget” about the tragedy while simultaneously encouraging residents to move on with their lives. Both volumes of Dead Dead Demon thrum with the activity of radio and television newscasts; through voice-overs and field reports, we learn the official version of events, but not what really happened on the ground. That same element of hollow reassurance informs a rally celebrating the successful demonstration of a new weapon. As people begin gathering, a chant of “Nippon!” ripples through the crowd. “Why are they all yelling ‘Nippon’?” one girl asked. “I dunno,” her friend replies, “But this is fun, so who cares?”

Asano’s art plays a vital role in suggesting the way in which the ordinary and extraordinary can coexist side-by-side. In this particular image, for example, Asano draws the undercarriage of the mother ship — its cannons, landing gear, and exhaust ports — with the same shapes and lines as he uses for the city below; it’s as if we’re viewing Tokyo on the surface of a pond, upside down and slightly murky: 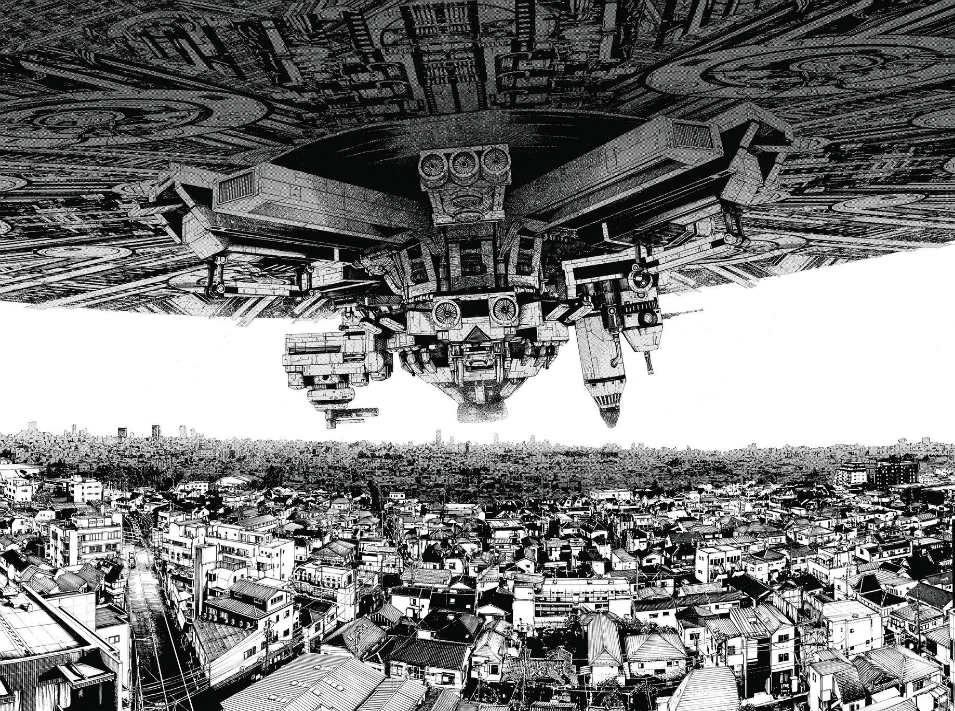 Then, too, there’s a tension between the hard, industrial precision of such imagery and the soft vulnerability of the principal characters, as is conveyed by this panel in which Kadode and Oran’s view of the sky is completely blocked by the mother ship:

Though Asano’s character designs are naturalistic, capturing that liminal state between adolescence and adulthood with physical accuracy, Kadode and Oran’s faces are preternatually elastic, registering the full gamut of teenage emotions with outsized intensity. Many of the adults, by contrast, resemble Noh characters with impassive, mask-like faces that make them look… well, cartoonish, emphasizing the degree to which deception and denial have robbed them of their ability to express the fear, uncertainty, and hopelessness that the invasion has undoubtedly stirred in them. It’s a technique that Asano has used in other series — most notably Goodnight, Pun-Pun — and it works beautifully here, underscoring the absurdity of the characters’ situation.

What makes Dead Dead Demon more than just a stylish exercise in nihilism is the way in which Asano recognizes the lengths to which people will go to preserve their routines and personal comforts. Asano doesn’t frame that act as heroic resistance or conscious choice, but an atavistic need for order, especially in the aftermath of a catastrophe. For Kadode and her friends, though, that quest for normalcy takes a slightly different form, as they’re not yet old enough to have their own homes, jobs, and families; the things they cling to — like pop music and video games — offer only temporary comfort, pushing them to seek deeper answers about the alien invasion.