And the winner of the Variety of Vertical Comics manga giveaway is… Michelle Gauthier!

As the winner, Michelle will be receiving the first volume of four manga series released by Vertical Comics: Ryo Hanada’s Devils’ Line, Chihiro Ishizuka’s Flying Witch, Riichi Ueshiba’s Mysterious Girlfriend X, and Keiichi Arawi’s Nichijou: My Ordinary Life. Since this giveaway focused on Vertical Comics, I asked participants to tell me a little about their favorite Vertical manga, too. Check out the giveaway comments for everyone’s detailed responses, and check out below for a list of some of Vertical’s manga.

The above list only includes the manga that have been released (or will be released very soon) under the Vertical Comics imprint which was launched in 2014, but Vertical began publishing manga well before then. (I’m fairly certain that Vertical’s first manga was Osamu Tezuka’s Buddha back in 2003, but I could be wrong.) Even before specifically devoting an imprint to manga and anime-related titles, Vertical has always had a strong catalog of titles which are well-worth reading. Thank you to everyone who shared your particular Vertical favorites with me! I hope you’ll all participate in the next giveaway, too.

It’s nearly the end of August which means it’s time for another giveaway at Experiments in Manga! Earlier this month I celebrated the blog’s seventh anniversary, and I’d like to continue that celebration by offering you all the chance to win not one, not two, not three, but four volumes of manga. In this particular case the first volumes of Ryo Hanada’s Devils’ Line, Chihiro Ishizuka’s Flying Witch, Riichi Ueshiba’s Mysterious Girlfriend X, and Keiichi Arawi’s Nichijou: My Ordinary Life, all of which have been published in English by Vertical Comics. As usual, the giveaway is open worldwide!

I’ve been a big fan of Vertical releases for years, not only of its manga, but its prose works, too, both fiction and nonfiction. (Two of my younger sisters also greatly enjoy Vertical’s puzzle books, although I think it’s been a few years since the last one was published). In 2014, Vertical launched Vertical Comics, an imprint specializing in the publisher’s manga and anime-related titles. Since then, Vertical Comics has continued to expand and offer more and more manga of a wide variety–there seems to be a little bit of something for just about everyone. And I’m always happy to give just about any manga a chance when it’s released by Vertical Comics.

So, you may be wondering, how can you win a variety of Vertical Comics?

1) In the comments below, tell me a little about your favorite manga that has been released by Vertical Comics. (If you don’t have a favorite, or haven’t read any, simply mention that instead.)
2) If you’re on Twitter, you can earn a bonus entry by tweeting, or retweeting, about the contest. Make sure to include a link to this post and @PhoenixTerran (that’s me).

And it’s as easy as that! Giveaway participants can earn up to two entries and have one week to submit comments. If needed or if preferred, comments can also be sent to me at phoenixterran(at)gmail(dot)com and I will then post them here in your name. The giveaway winner will be randomly selected and announced on September 6, 2017. Best of luck to you all!

Other than the usual My Week in Manga, I didn’t manage to post any other features at Experiments in Manga last week. This was largely expected since I’m still catching up from my trip to the Toronto Comic Arts Festival. I have, however, been working on writing up some of my random musings about this year’s festival and hope to have those ready to post within the next few days. There is one thing that happened last week that I’d definitely like to share with everyone, though: the artwork that I commissioned from KaiJu was finished! 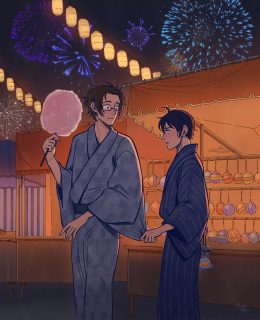 The illustration is of the characters Sachi and Kadoyuki from Lianne Sentar’s Tokyo Demons, a series which I love very, very much. I’m also quite fond of KaiJu’s original work as well, some of which I’ve previously reviewed here at Experiments in Manga. The creative team’s current comic is Novae which is absolutely wonderful and well-worth checking out.

Elsewhere online: Lilian Min talks to Jane Mai and An Nguyen about their new book So Pretty / Very Rotten in the article The Complex Femininity of Japanese Lolita Fashion. One of Tofugu’s most recent podcasts, Interpreting for Osamu Tezuka, features Frederick L. Schodt. Also at Tofugu, manga translator Zack Davisson has some advice for learning Japanese. Speaking of Davisson, he’ll be translating two of Seven Sea’s recently announced acquisitions: Go Nagai’s original Devilman manga series (this is huge!) as well as Go Nagai and Team Moon’s Devilman vs. Hades manga. In other licensing news, Viz Media will be releasing Hinodeya Sankichi’s Splatoon manga.

Flying Witch, Volume 1 by Chihiro Ishizuka. I was only vaguely aware of Flying Witch before Vertical Comics licensed the manga; although I haven’t actually watched it, a twelve-episode anime adaptation of the series first aired a little over a year ago. Flying Witch is a manga about Makoto, a fifteen-year-old witch who has moved to the country to stay with her relatives while she completes her magic training. She’s a bit of an airhead and has a terrible sense of direction, but she’s earnest and kind and quick to make friends with the locals. The focus of Flying Witch is on the everyday lives of Makoto, her relatives, and friends. It’s a gentle and harmless manga that much of the time isn’t even about magic though it can still occasionally be charming. The manga’s artwork, much like the story itself, is functional but not particularly distinctive and even the worldbuilding is somewhat lacking. Flying Witch isn’t a bad series, but it didn’t really grab me, either. Granted, I don’t have a particular interest in witches. However, I did really like the series’ countryside setting. Additionally, The Harbinger of Spring, a nature spirit introduced in one of the final chapters of the first volume, was a fascinating addition and easily my favorite part of the manga.

Jane Eyre adapted by Crystal Silvermoon Chan and illustrated by SunNeko Lee. Charlotte Brontë’s Jane Eyre holds a very special place in my heart; I first read it in high school and it remains one of my favorite novels. To varying degrees, I’ve enjoyed the numerous films, novels, comics, and other works inspired by Jane Eyre that I’ve encountered as well. And so I was very curious to read one of the most recent adaptations, Chan and Lee’s Jane Eyre comic from Udon Entertainment’s Manga Classics line. (This is the same creative team which worked on the adaptation of Victor Hugo’s Les Misérables, one of Manga Classics debut titles.) Though overall Lee’s artwork is attractive, I wasn’t entirely satisfied by the character designs of the leads–Jane as a young woman doesn’t look much older than when she was a child, and Mr. Rochester comes across as too traditionally handsome. Other than that relatively minor complaint, Chan and Lee’s Jane Eyre remains true to Brontë’s original and is an enjoyable and very accessible rendition. Some small changes have been made, as Chan describes in the essay about the adaptation process, but all the major characterization and plot points remain. The volume also includes additional historical background information. Now I really want to reread the novel again.

Sherlock, Volume 1: A Study in Pink by Jay. I believe Sherlock is the very first manga to be released by Titan Comics, recently followed by Yano Takashi and Kenji Oiwa’s Assassin’s Creed: Awakening. The fact that Titan isn’t a typical manga publisher and hasn’t released many manga may partly explain why Jay’s adaptation of the BBC’s television series Sherlock was first released in English as six individual comic issues before being collected into a single volume. Titan’s catalog largely consists of comic adaptations of Western television and video game franchises, so Jay’s Sherlock fits in nicely with the rest. Sherlock is a modern reimagining of Sir Arthur Conan Doyle’s Sherlock Holmes stories, A Study in Pink influenced heavily by Doyle’s novel A Study in Scarlet. It’s been a while since I’ve actually watched A Study in Pink, but Jay’s interpretation does seem to be a very faithful one, including character designs that are based on the show’s actors, most notably Benedict Cumberbatch (Sherlock) and Martin Freeman (Watson). Some of the action can be a little difficult to follow, but otherwise I largely enjoyed Jay’s version of A Study in Pink. However, because it is such a close adaptation and nothing much is added or taken away I’m not entirely sure who the best or intended audience for the Sherlock manga would be; most people would likely be satisfied with the original episode.

If you’ve dipped a toe in the online dating world, you’ve undoubtedly arranged a date with someone who turned out to be pleasant, polite, and attractive, but not terribly interesting. I had a similar experience with volume one of Flying Witch, a manga that looked promising but lacked the necessary spark of weirdness or wit to make it worth a second chance.

Flying Witch has a simple but fertile premise: Makoto Kowata, a teenage witch-in-training, moves from Yokohama to her cousins’ farm and enrolls in the local high school. Though Makoto’s parents warned her not to reveal her true identity to other people, Makoto blithely confesses her avocation to peers and strangers alike, almost always without prompting.

That running gag is indicative of what works — and what doesn’t — in Flying Witch. In the manga’s best scenes, artist Chihiro Ishizuka wryly juxtaposes the banality of the setting with the strangeness of Makoto’s witchcraft, whether Makoto is test-driving brooms at the local supermarket or pulling up a mandrake from an abandoned field. In these moments, Makoto’s enthusiasm overwhelms her desire to escape detection; she’s astonished that her classmate Nao recoils from the noisy, squirming mandrake, and begins regaling Nao with a list of its medicinal uses in an effort to explain why mandrakes, are in fact, awesome gifts.

In other scenes, however, the punchline is toothless, coming at the end of a long monologue about witchcraft or a chance encounter with a villager who isn’t the least bit scandalized by Makoto’s true calling. Makoto’s blushing and stammering is overplayed to diminishing returns; any reasonable person would wonder why Makoto hasn’t realized that her big secret isn’t a big deal. The same is true for other recurring “jokes” about Makoto’s terrible sense of direction, which are as unfunny on the third or sixth iteration as they were on the first.

The artwork, like the script, is lackluster. Though Ishizuka’s lines are clean and her layouts easy to read, the characters’ blank faces do little to sell the jokes. Chinatsu, Makoto’s ten-year-old cousin, is one of the few characters to register any emotional response to Makoto’s behavior, reacting with a mixture of saucer-eyed fear and astonished exuberance. The rest of the characters drift through the story without much purpose, functioning more like props or set decoration than actual people. Only cameo appearances by the aforementioned mandrake root and the Harbinger of Spring inject the proper note of piquant strangeness to the proceedings, reminding us that Makoto’s existence straddles the fence between the ordinary and the supernatural.

I wish I liked Flying Witch more, as it has all the right ingredients to be a quirky, fun series. Alas, reading Flying Witch is like having dinner with a handsome bore who collects vintage lunch boxes or builds crystal radios; you just know there’s a good story there, but it never comes across in the telling.