The phenomenal success of Yuri!!! On ICE turned out to be a boon for manga fans, too, as American publishers snapped up two of Mitsurou Kubo’s better-known comics: Moteki: Love Strikes!, a seinen romance about a thirty-something loser who reconnects with women from his past, and Again!!, a time-travel comedy about two teenagers who get a second chance at high school. I won’t lie: Again!! was my hands-down favorite of the two, both for its raw honesty and its sharply observed characters.

Again!! avoids the sophomore slump by briskly advancing the plot without sacrificing the humor or heart that made the first chapters so appealing. Kinichiro and Fujieda both get a turn in the spotlight, with Kinichiro discovering the pleasures of cheering, and Fujieda experiencing loneliness for the first time. Volume two also introduces three new characters, all of whom used to belong to the ouendan: Okuma, the drummer; Masaki, the vice-captain; and Suga, the cheer sergeant. Although the trio’s ostensible role is comic relief, their real function is helping us understand why the ouendan failed, revealing the degree to which their unwanted advances, passivity, and flagrant sexism undermined Usami’s authority as captain and poisoned group morale.

While this information is crucial to the story, it also points to Again!!‘s biggest problem: Usami. Mitsurou Kubo is frank about why Usami resorts to shouting, scolding, and shaming to prove that she’s “man” enough to lead the ouendan — a compassionate insight into a character who often seems more harridan than human. Yet Usami’s actual personality remains a mystery. Everything we learn about her is revealed through other characters, whether they’re discussing her beef with Abe, the head cheerleader, or describing the flurry of media interest in Usami when she first joined the ouendan. We don’t know how Usami feels about her teammates, or why she’s so passionately interested in cheering — two questions that need to be addressed if she’s to become a full-fledged character.

Despite these flaws, Again!! manages to wring fresh laughs from its time-travel premise while depicting high school in all its unpleasantness. Fujieda, for example, vacillates between trying to profit from her knowledge of the future and lamenting her lack of friends. Kinichiro also is caught between past and present: he’s angry that his first kiss didn’t go as planned, and deeply self-conscious after a loud, public declaration of how miserable he feels — an exquisitely awful scene that acknowledges the depth of his pain while recognizing that his brusque behavior directly contributes to his sense of isolation and victimhood. It’s this kind of insight that makes Again!! such a compelling story, reminding us that our memories of being shunned, wronged, or ridiculed can be so one-sided that we’d make the same mistakes if given the opportunity to relive our teenage years. Recommended.

There are no second chances in life, but there are in manga — think A Distant Neighborhood, Erased, and orange. The latest entry in the second-chance sweepstakes is Again!!, a dramedy about Imamura Kinichirou, a loner who tumbles down a flight on stairs at his high school graduation and wakes up on the first day of freshman year. Doomed to repeat the worst three years of his life, Imamura impulsively signs up for the school’s ouendan, but quickly runs afoul of prickly captain Yoshiko Usami, whose dedication to the struggling club proves more deterrent than draw for would-be members.

Imamura isn’t the only time-traveler; joining him on his temporal odyssey is Akira Fujieda, a perky classmate who also tumbles down a flight of stairs at graduation. Unlike Imamura, Akira greets this development with enthusiasm, but her fond memories of high school make her too quick to assume that everything will unfold the same way twice: she propositions her not-yet-boyfriend too boldly (he turns her down) and dismisses a would-be friend’s taste in music. (“It’s too bad Cara Mana broke up so soon,” Akira declares. “It didn’t take me long to get sick of them, though, since all their songs sort of sound the same.”) Crushed by the double rejection, Akira becomes Imamura’s reluctant ally in the quest to restore the ouendan to its former glory.

Whether you cotton to Again!! depends on how you react to the principal characters. I found Usami’s fierce commitment to tradition exhausting; she bellows, belittles, complains, accuses, and sobs, but seems fundamentally unable to have a normal conversation. Her bluster is meant to suggest her sincerity and vulnerability, I think, but has the opposite effect, reducing her to a one-note character. More convincing is Imamura, who decides that a do-over isn’t as terrible as he’d imagined. (I particularly enjoyed his nonchalant turn at the board in his math class; his classmates’ reaction to his display of mathematical acumen is priceless.) Imamura even flirts with the possibility of a social life: when the girls’ cheer squad mobilizes against Usami, for example, Imamura conspires with Akira and Reo, a pretty classmate, to undermine the cheerleaders’ plan.

Akira, too, is a pleasant surprise, a busybody who’s suddenly relegated to the margins of freshman life. Though her sense of the school’s pecking order remains unchanged, she can’t resist the opportunity to advise the once-lowly Imamura on how best to manipulate the cheerleading squad — it’s her chance to demonstrate her expertise, and perhaps to reclaim her former Queen Bee status by engineering a major social coup. As one might expect, Akira gets the sauciest lines, but she also learns the hardest lesson of the three principal characters: serendipity plays as big a role in popularity as personality and looks.

Mitsurou Kubo’s art plays a vital role in helping us understand Imamura and Akira’s predicament. In the first two chapters, Kubo does an excellent job of distinguishing past from present with subtle details: Imamura’s mom, for example, is a little plumper, while Akira is shorter and less physically developed. (Akira realizes something is amiss when she realizes that her breasts are smaller.) Equally impressive is the care with which Kubo reconstructs the same sequence of events that precede the time jump, showing us Imamura’s memories of the day and then Akira’s. Here again, it’s the little details — a snippet of conversation, a minor change in hairstyle — that convey whose perspective is represented, and how that character’s personality influences what we’re seeing and hearing.

Kubo’s facial drawings show the same degree of meticulousness as her handling of the time travel sequences. Her reaction shots do more than just capture a character’s immediate response to a new development; they convey the emotions and experiences that underlie that reaction. Consider this split-screen image of Imamura: 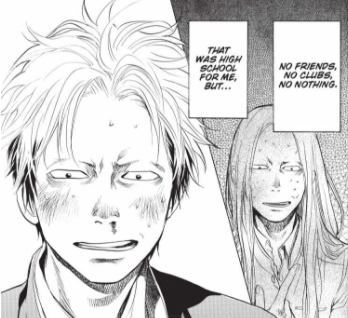 This panel appears at the end of chapter one, as Imamura stands at a temporal and figurative crossroads: he can change his future by joining the ouendan, or recede into the background and be a loner once again. Imamura’s furrowed, sweaty brow and crestfallen expression capture his sense of helplessness; he has the look of someone who’s actively reliving a terrible experience moment by moment, contemplating the real possibility that nothing will change the second time around.

It’s this level of nuance that makes Again!! worth reading, even when the plot mechanics are creaky and the characters too strident. Watching Imamura forge new connections on his own terms is both funny and poignant, a reminder that we always have the potential to change our destiny, even when it seems preordained. I’m curious to see how Imamura and Akira grow and change, and how their behavior influences the future. Count me in for volume two.