MICHELLE: Hey, Melinda! Did you hear about the fire at the circus?

MELINDA: Why no, Michelle. Why don’t you tell me about it?

MICHELLE: It was in tents!

MICHELLE: I concede that there is a distinct possibility that nobody enjoys these dumb jokes but me, but I can’t seem to resist trotting them out whenever it’s my turn to start us off. Anyhoo, read any good manga lately? 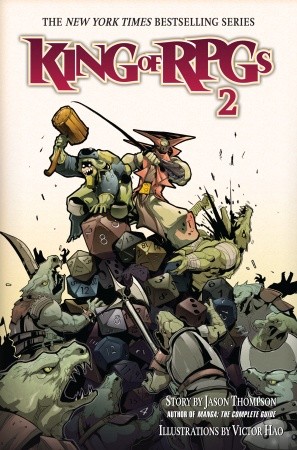 MELINDA: I certainly have! It’s been a long time coming, but I finally acquired myself a copy of the second volume of Jason Thompson and Victor Hao’s OEL manga series King of RPGs, released over a year ago by the much-missed Del Rey. I enthusiastically reviewed volume one many moons ago for Deb Aoki at About.com, but I’d missed continuing on. And now that I have, I’m sorry that it took me so long!

After volume one’s over-the-top, madcap, shounen-esque conclusion, the series’ second volume begins in relatively grounded territory as it introduces us to the online universe of “World of Warcraft Warfare,” the MMORPG that originally drove the story’s hero, Shesh, to hospitalization and extensive psychotherapy. WOW servers have been overrun by “gold farmers”—players who collect in-game valuables (currency, magical items, high-level characters, etc.) and sell them for real-world cash. As rival guild members battle and kill each other (rather than their AI enemies) over these valuables, the name “Moggrathka,” Shesh’s long-abandoned character, lives on in legend as the most-feared and respected player-killer of all time. Soon after, we’re reintroduced to Rona Orzak, volume one’s misguided, gamer-hating student policewoman, who inadvertently reawakens Shesh’s in-game alter-ego by way of her own WOW account, thus unleashing the player-killing monster into both the real and virtual worlds. Of course, in King of RPGs, only tabletop gaming can save the day!

This series has a lot going for it, particularly for gamers and shounen manga fans who are pretty much equally serviced by its generously applied fan culture references, character-driven narrative, and fast-paced adventure. But its greatest appeal by far is Jason Thompson’s spot-on humor, which somehow manages to make a bunch of potentially alienating in-jokes accessible to casual readers without mocking hard-core fans. I can only attribute this to Thompson’s obvious love for the subject matter, and its effectiveness really can’t be overstated. If there’s a consistent vibe that tends to emanate from real nerd culture, it’s a weird combination of passionate fandom and deep resentment over any attempt to bring newcomers into the fold—as if the conversion of each new fan somehow reduces the value of the fandom itself. But Thompson actively invites readers into the world of tabletop RPGs (and, more stealthily, shounen manga) with a real warmth and generosity that makes you want to join him at the table. That, more than anything, makes the series a great read. And the hilarity… oh, the hilarity!

I should mention, too, Hao’s artwork, which has really grown since the series’ beginning. Volume two’s visual storytelling is just as energetic as ever, but feels cleaner and vastly more focused, especially in later chapters.

MICHELLE: You know, I have volume one on my shelf, but never got around to reading it. It seems like I should rectify that. Has there been any word on the fate of this series now that Del Rey is no more?

MELINDA: Nothing official that I’m aware of (though I believe the authors are hopeful!), but Jason Thompson’s webcomic “expansion” has been running on the series’ website since February, so there’s something to tide us over, at least. Also, gamers will enjoy the fake blog of Theodore Dudek, King of RPGs‘ overenthusiastic GM.

So, now that I’ve sufficiently nerded-out, what have you been reading this week? 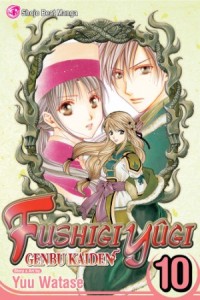 MICHELLE: I have been enjoying a marathon catch-up read of Fushigi Yûgi: Genbu Kaiden, by Yuu Watase!

The anime of the original Fushigi Yûgi was one of the first shoujo anime I ever saw, and the story remains dear to my heart, even though I am fully cognizant of its flaws. When Genbu Kaiden started coming out in English, I collected it faithfully, but somehow never ended up reading it. Now that the much-anticipated tenth volume has finally been published (almost three years after volume nine), I made it my priority to get caught up.

And what a delightful read it has been! Watase sure has matured a lot as a storyteller in the intervening years, crafting a story that’s similar enough to the original to appeal to long-time fans, but fully its own creation capable of attracting new readers. Genbu Priestess Takiko Okuda is a much more likable heroine than the original’s Miaka, and the primary romance here is one that leaves me more touched than annoyed. I was actually expecting to like Tomite and Hikitsu the best (especially Hikitsu), since they appeared in the original story (and since Hikitsu is very pretty), but my favorite characters have actually turned out to be the Celestial warriors appearing here for the first time. I’m surprised by how much I like Uruki (Takiko’s love interest), but my favorite is probably Namame, the mute (only Takiko can hear his voice) but ever-helpful warrior who spends most of his time in the form of a stone doll.

In volume ten, the Celestial warriors have infiltrated the capital, where one of their number is being imprisoned and made to use his powers for the protection of the power-hungry emperor. Some nifty revelations ensue, including a tour through the memories of Uruki’s corrupt dad, but by far the most significant aspect of the story is that Takiko has begun to show signs of the same illness that claimed her mother’s life, but is trying to hide it from the others. She knows now that she will be compelled to sacrifice herself if she summons Genbu, but since her death seems imminent anyway, it might as well serve the purpose of saving people who are dying from war, cold, and starvation.

Although there are a few lighthearted moments—as well as a smattering of romantic ones—on the whole, this is a much more sober tale than the original and definitely its equal, if not its superior. I’m exceedingly glad to see volume eleven on the near horizon (March 2013) and hope that one day Watase is able to pen the Byakko saga, as well!

MELINDA: I’m so glad you’ve caught up on this series, because now we can share the squee! Having (still!) not read the original—something I’ll rectify soon—I don’t have the same reference for comparison, but I’ve enjoyed Genbu Kaiden immensely. I’ve also been surprised by how much I like Uruki, and I thought his romance with Takiko was one of the highlights of volume ten. And could Namame possibly be more adorable? I don’t think so!

MICHELLE: I am starting to think you may want to avoid the original until Genbu concludes, because it does give away the ending, though I am sure Watase has some surprises in store on that account.

Anyway! Once again, we have both read the debut volume(s) of a newly released series, which is something we enjoy doing and something we intend to do more of in future! Care to tackle the introductory duties this time, Melinda?

MELINDA: I’d be happy to! 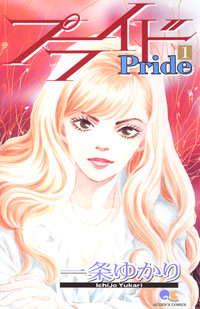 Pride follows the stories of two aspiring classical singers—Shio Asami, whose upscale musical education is abruptly halted by a sudden downturn in her widower father’s fortunes, and Moe Midorikawa, whose lower-class background has made entering the elitist world of opera an uphill battle from nearly every angle. Though the series’ plotline mainly concerns their mutual struggle to keep singing while maintaining day-to-day survival (along with the obligatory rivalries, both professional and romantic), the real meat of it all lies in the ways that their disparate backgrounds have formed their personalities and how that affects the way they approach their respective lives and careers.

Shio’s respectable upbringing and musical pedigree (her late mother was an international opera star) have burdened her with a sense of pride that is ultimately unhelpful when she requires assistance from others, and her well-schooled refinement hinders her ability to perform with any real emotional resonance. Meanwhile, Moe’s natural expressiveness as a singer is not quite enough to make up for inferior training, and her desperate personal circumstances have made her absolutely ruthless (and fairly ungraceful) in her quest for career success.

What works particularly well about all this is that Ichijo manages to make both characters pretty much equal parts sympathetic and maddening. And while Shio ends up tipping the scale in likability, it’s impossible not to sympathize with Moe’s deep need to escape from her truly icky origins. By the end of volume two, I found myself rooting for both of them, despite their genuinely ugly rivalry.

MICHELLE: Kudos on that summary! I loved Pride almost without reservation. Let’s see if I can count the ways… 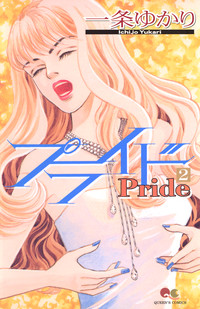 I love that Shio doesn’t follow the “poor little rich girl” stereotype. She and her father have a genuinely loving relationship, and though the fact that she’s been protected from pain and hardship all her life later becomes a weakness, it’s still this relationship that gives her the strength to persevere. As a musician, I really identify with Shio’s struggles with expressiveness and the realization that perfection is sometimes boring. I was especially interested when she abandons the fantasy of herself as a singing princess and really begins to recognize the reality of her situation. I worry that marrying Jinno, the producer, will allow her an only temporary return to that sparkling world, only to be followed my massive despair. (I worry for her marrying him much like I worried about Hachi marrying Takumi in NANA, actually.)

Too, I love that the rivalry between Shio and Moe is so very equal. They’ve each got skills the other doesn’t possess, which makes them the perfect mate/muse for the guy that the other girl fancies, and it all builds so organically. True, I can’t really like Moe very much, but I absolutely sympathize with her. About the only aspect of Pride that I didn’t love were the scenes involving Moe’s incredibly horrible mother, but I acknowledge they were necessary and am grateful that Ichijo kept them fairly brief.

Although each woman is dealt some awful blows, each also has a few lucky breaks, too, so everything balances out.

I’ll add, I guess, that though I share your reservations about Shio marrying Jinno, at least she’s going in with her eyes open, unlike Hachi did in NANA. Shio’s not remotely in love with Jinno and has no illusions about him being in love with her, so while I think she’s ultimately in for a very unhappy marriage, at least she’s not fooling herself into thinking it’s a real marriage to begin with. In a way, that’s what makes it such a powerful plot point. She’s prepared for it to be disappointing, romantically, but I suspect it’s going to disappoint and hurt her in other ways that she’s not anticipating at all. And I’m sure it’ll make for great drama in future volumes!

MICHELLE: I’m sure it will! All in all, this is just a great depiction of how just plain old life can get in the way of one’s dreams, and how two women still have enough fight left in them to keep trying to attain what they want, rather than just giving up.

Thank you so much, JManga, for introducing us to Pride! Please, sirs, can we have some more?