This month, Melinda checks in on the iPad manga scene, while Sean takes a look a a recent JManga release for your web browser. Device, OS, and browser information is included with each review as appropriate, to let you know exactly how we accessed what we read.

Manga on the iPad: 18 month check-in 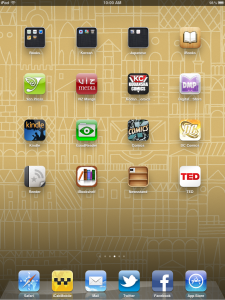 It’s been a year and a half since New York Comic Con 2010, where Yen Press announced the launch of their new iPad app. Viz followed soon after, and quickly rose to the head of the class thanks to their quickly growing catalogue and significantly lower pricing. Fast forward to NYCC 2011, where Kodansha USA finally joined the game, followed by Digital Manga Publishing a few months later.

For me, the success (or failure) of any manga app can be boiled down to three basic components: functionality, selection, and price. So now, 18 months after manga first began trickling onto the iPad, how are publishers faring on these three key issues?

All four of the major manga apps began with strong functionality right out of the gate. Their (very similar) layouts are all fairly intuitive, with easy access to each publisher’s catalogue as well as the user’s own library of purchased manga. Each app offers high-quality images, and the ability to read in single or double page-view, as well as the ability to zoom in on (and out from) any single panel with ease. Of these apps, only Kodansha Comics’ displayed any functionality issues at launch time, with its progressive images that stall readability from page to page. Unfortunately, this issue appears to remain unresolved at the time of this writing, making Kodansha Comics’ app the least visually attractive of the manga apps to-date.

It’s worth noting here, too, that while both Viz and DMP both have browser-based stores as well, so far only Viz’s app allows for cross-platform purchases, while eManga customers must buy again to read their purchased volumes on the iPad.

Viz far outshines its mainstream competitors in this category, with over fifty titles available to-date (and more being added all the time), including super-popular titles like Naruto and One Piece, as well as more eclectic fare like House of Five Leaves and Saturn Apartments. Though I’m still hoping to see some of Viz’s out-of-print shoujo licenses show up here one day (e.g. Please Save My Earth, Banana Fish, Basara) there’s no denying that Viz is blowing everyone else away when it comes to selection on this platform. Recent additions like Hikaru no Go suggest that Viz indeed views its various digital platforms as a means for introducing long-running, completed series to new readers, and I certainly hope to see that continue.

DMP started out with a very strong catalogue, particularly for fans of its Juné and Digital Manga Guild imprints, but new additions have stalled since their recent issues with Apple censors, and it’s difficult to know at this point what the future of their app might be. BL fans can still pick up over fifty different titles (several with multiple volumes) at the time of this writing, ranging from newer releases like An Even More Beautiful Lie, Seven Days, and Blue Sheep Reverie, to older titles like Maiden Rose and Il Gatto Sul G. Though many more DMP/DMG titles are currently available to iPad readers by way of Amazon’s Kindle app (which has had its rocky moments, too), issues like image quality and reading direction make this option less than ideal.

While Yen Press’ catalogue is relatively small (25 titles as of this writing), it does have the advantage of being the only real source for Korean manhwa among these publishers to-date. Manga Bookshelf favorites like Time and Again and 13th Boy are both being released by Yen Press on this platform, and I certainly hope this will be a continuing trend. Though Yen’s manhwa licensing seems to have come to a halt over the past year or so, it would be a real treat to see series like Forest of Gray City or Very! Very! Sweet make a reappearance on the iPad so that they can be discovered by new readers. OEL series are another highlight of Yen’s app, including critical successes like Nightschool and Soulless: The Manga. Yen’s manga selection is less impressive, with titles Yotsuba&! and The Melancholy of Haruhi Suzumiya standing as its heaviest hitters.

Bringing up the rear in this category again is Kodansha Comics, whose catalogue has still not expanded beyond the four series it launched with (Arisa, Fairy Tail, Sayonara, Zetsubou-Sensei, and Until the Full Moon) even after six months.

Here, again, Viz leads the pack, with prices starting at $4.99 a volume for Shonen Jump and Shojo Beat series, $5.99 for IKKI and Signature series, and between $6.99-$8.99 for oversized or omnibus releases. Though I still think that $5 a volume is too high to encourage real bulk purchases, it remains the best price out there for manga on the iPad. Kodansha Comics’ volumes sell for $4.99 apiece as well, though it’s worth mentioning that they ran a $2.99 special for Fairy Tail when the app first launched—a price I absolutely would pay for bulk purchases of a series I had interest in reading.

Both Yen Press and DMP lag in this category, with single volumes going for $6.99-$8.99 apiece—sometimes significantly more than print prices online—and $12.99 for larger volumes. Though BL readers, in particular, are accustomed to paying more for their habit, thrifty shoppers who are willing to put up with the downsides of the Kindle app can pretty much always get the same books for less by going that route—and have their purchase available on their other compatible devices as well, including their computers. I will admit that though I was fairly depressed not to be able to purchase Keiko Kinoshita’s You & Tonight through DMP’s far superior iPad app, it’s awfully nice to have it available on both my iPad and my laptop via Amazon’s Kindle app.

Viz is the clear winner on the iPad overall, performing well in all three categories of functionality, selection, and price. DMP’s app is promising, and should they manage to resolve their issues with Apple and find a way to better serve cross-platform customers, they could become a digital powerhouse for BL fans, despite a significantly less attractive price point. Yen Press’s app lags in both selection and price, though it does hold a particular allure for manhwa fans. (Will we ever see NETCOMICS in the iPad app game?) And though Kodansha Comics does well when it comes to pricing, its dinky selection and less-than-optimum readability diminish its worth significantly.

What do you suppose this year’s New York Comic Con will bring? – Melinda Beasi 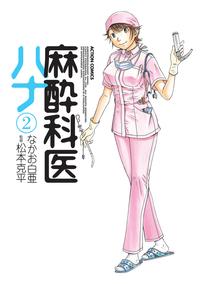 Anesthesiologist Hana Vol. 2 | By Nakao Hakua and Kappei Matsumoto | Futabasha, Manga Action | JManga.com | Windows XP, Firefox 11.0
Volume Two of this medical series continues to pummel our heroine with exhausting daily living. I’d say crises, but she’s an anesthesiologist, so to a certain degree this is what she does. She has professors teaching a class putting her on the spot to embarrass her, the hospital changing to more of a trauma unit center (meaning longer hours), and most of all a new doctor in the unit, Hiura, who is a complete and utter jerk to her He’s constantly yelling at her and forcing her to step up her game, and is rude to her other colleagues… especially Dr. Kobayakawa, the troubled young doctor Hana hit it off with last volume. Of course, those familiar with this type of manga will know immediately that he is the sort of person that doesn’t suffer fools gladly. He dislikes Kobayakawa for his fear and wasted potential, and is so hard on Hana because of her increasing skills and pluck – he teaches by rudeness, basically.

He also, in yelling at Hana, basically notes that her breasts are big, something this manga never really allows us to forget. There’s no gratuitous shower scene here, but instead we get a new trauma doctor, Kenshi, who simply walks up, marvels at her breasts, and starts to fondle them. My jaw dropped briefly, and I am once again reminded of the huge sexual harassment gulf between here and Japan, in that Hana didn’t slug him. Yes, this is supposed to take place in the mid-90s rather than the time it was written, but sheesh. This doctor later gets a nice moment where he tries to teach Hana a basic truth – patients die, and that doctors simply have to accept this and try to save the next one just as hard – but he can’t read her as well as Hiura, so it doesn’t really take. In any case, if his schtick of groping Hana becomes his running gag, I can’t say I’ll be too fond of him.

There’s a lot of medical stuff going on here, and like the first volume if the reader doesn’t want to wade through some jargon they may be in trouble..That said, it’s not too difficult, and the basic premise remains the same – a doctor’s life is very hard, and every day is a struggle to wonder if it’s worth it. Especially given that these are anesthesiologists, so they don’t have the ‘these are my life-saving hands!’ aspect that, say, heart surgeons would. Hana, like the heroine of Nao Go Straight, can be too empathic at times – something contrasted with the new trauma doctors introduced towards the end. The best chapters were the two-parters, one dealing with the patient who loses his life, as I’d mentioned, and the other with how anesthesiologists have immense trouble with morbidly obese people. Hiura wants to harness Hana’s passion, and avoid having her become like Kobayakawa. Can he do it? To be continued! -Sean Gaffney