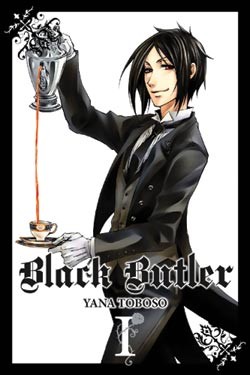 Sebastian Michaelis is the dashing, fantastically capable, devoted butler of the Phantomhive family, whose only son (junior high-aged Ciel) has commanded the estate and its businesses since the demise of his parents. Sebastian performs his duties with super-human strength and skill, able to create elaborate chocolate sculptures and fight off scores of assassins in a single breath. “I am the butler of the Phantomhive family. It goes without saying that I can manage something as trivial as this,” is the standard line (with variations).

The story begins as a comic romp, with Sebastian being forced to employ his outrageous skills in order to compensate for the incompetence of the rest of the estate’s bumbling staff–a group of characters so grating it’s incredibly difficult to find them funny. This circumstance is only made worse by the section following, in which Ciel’s overly exuberant young fiancée makes the irritating staff seem downright loveable. Fortunately, just as one might be tempted to toss the book across the room in a fit of frustration, things begin to look up.

As it turns out, Sebastian isn’t super-human. He’s not human at all, but rather a devil who has entered into a contract with Ciel. Though he’s bound to serve Ciel devotedly until the end of his life, Ciel’s soul will then be Sebastian’s for eternity, a shift into darkness that finally brings the series to life. Sebastian’s sinister nature not only makes him more compelling as a character, but it also humanizes Ciel, who suddenly becomes a complex victim instead of just a cold, soulless pre-teen. The series’ second volume improves on this further, thanks in no small part to the fact that its primary adventure takes place away from the Phantomhive estate and its maddeningly dim employees. 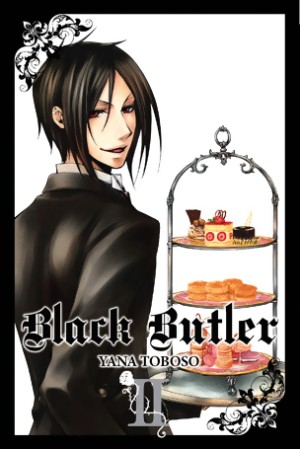 The story’s action is elegant and beautifully-drawn, and it is the action that provides most of the series’ highlights, at least in the first two volumes. Even Tobaso’s humor works best in these moments, lending genuine whimsy to Sebatian’s battles as he takes out hired gunmen with kitchen forks and knives. Unfortunately, some of the series’ other elements are less whimsical than disturbing.

Unfortunately, Black Butler‘s specialty is not just BL but shota, which makes Sebastian even creepier and not at all in a good way. Though there may be nothing essentially inappropriate about Sebastian associating Ciel’s sleeping face with the soft pads of a cat’s paw, there’s an authorial wink to the audience that feels somewhat less than pure.

That said, though Black Butler gets off to a very slow and fairly vapid start, there is a sense that a deeper story lies within. With Tobaso’s pretty artwork as pleasant accompaniment, it may be worth sticking around just to see.

Review copies provided by the publisher. This review is a part of Shonen Sundays, a collaborative project with Michelle Smith.