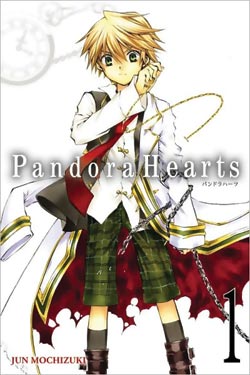 Oz Vessalius, aged fifteen, is a carefree young aristocrat with an absent father whom he has emotionally replaced with his kind, attentive uncle. On the morning of his coming-of-age ceremony, he goofs around with his little sister, Ada, and teases his young servant, Gilbert, who is mortified to hear that Oz wishes him to be part of the ceremony, not as a servant but as a friend. The day is filled with oddities, such as the discovery of a hidden grave on the mansion property where Oz’s family ceremonies are held, accompanied by strange visions of an angry girl in a surreal, lonely place, and Oz’s sense of uneasiness begins to grow.

As his ceremony finally gets underway, Oz is shocked to find himself surrounded by cloaked figures ready to cast him into The Abyss, a place he has heard of only in stories as a terrifying prison where the world’s worst sinners are locked away forever. Though the proceedings are disrupted by the appearance of the girl in Oz’s earlier vision (whose dual appearance as an enormous black rabbit has earned her the nickname “B-Rabbit”), the cloaked crowd ultimately has its way and, branded with a sin he knows nothing about, Oz is thrown into The Abyss.

Once there, he finds himself battling “chains” (creatures of The Abyss who are anxious to eat him), though again he encounters the girl from his vision who introduces herself as Alice. Alice is also a chain, she tells him, and as Oz struggles for his life, she lures him into a contract that would allow them both to escape The Abyss. Upon their escape, they are greeted by three members of an organization called Pandora, who use Oz’s devotion to Alice (and Alice’s desire to recover her lost memories) as a tool to convince them to join in on their quest to discover the motives of the Baskervilles–the group who sent Oz to The Abyss in the first place.

That’s a lot of plot to spell out in a single review, though it really only scratches the surface of this whirlwind shonen fantasy. Impressively, though the story races along at an exceptionally fast pace, it is very easy to follow and its characters immediately take shape, evoking both sympathy and great interest from the beginning. Both Oz, whose carefree attitude hides significant intelligence and compassion, and Alice, whose aggressive, fearsome persona seems crafted to protect the psyche of a very damaged young girl, are immediately compelling. Even the three from Pandora–Sharon, whose youthful appearance seems a bit suspect, Break, whose attachment to a possibly supernatural doll-like creature (Emily) he keeps on his shoulder paints him as pretty much off his rocker, and Raven, a tall, dark, sullen man who seems unusually protective of Oz–are already distinctive and fairly enthralling, thanks to Jun Mochizuki’s clear writing and artistic skill.

Mochozuki’s art is central to the atmosphere of this manga, with its detailed character designs and settings. Much inspiration is taken from John Tennial’s vision of Lewis Carroll’s Wonderland, with the addition of Mochizuki’s own style which excels particularly in the story’s creepiest moments, such as Oz’s adventure in The Abyss. Mochizuki also has a tendency towards generously-sized coats and shirtsleeves that hang over the characters’ hands, which might suggest typical moe infantilizing if not for the fact that it is applied to male characters as often as (or more than) female characters. It is the costuming in particular that shapes Break’s character, for instance, rendering him strangely endearing instead of just terrifyingly crazy. These observations are not meant to belittle the writing at all, of course. In fact, it is the combination of both that creates these distinctive characters so quickly and with apparent effortlessness. The story’s actions sequences are unusually coherent and easy to follow, with a very dramatic use of contrast and paneling, matching its surreal setting beautifully.