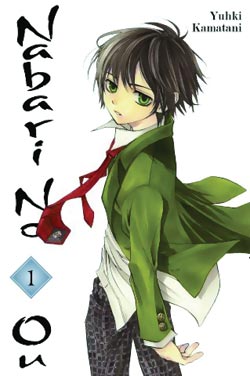 Middle school student Miharu, a quiet loner whose life’s plans extend to the inevitable inheritance of his parents’ okonomiyaki shop, carefully avoids becoming involved in anything that would require him to care about anyone (or anything), or worse, require anyone to care about him. Unfortunately, his dreams of perfect apathy are shattered when he discovers that he holds The Secret Art (shinra banshu)–the power to control everything in creation–inside his own body.

Having recently reached the sad conclusion that I had absolutely no interest at all in ninja, I did not expect to enjoy this manga, but Nabari No Ou‘s dark tone, unexpected humor, and unusual protagonist really drew me in and kept me intently engaged throughout its first volume.

Miharu is the biggest mystery at the center of it all. So apathetic, his parents can send him out in hideous fashions and he doesn’t even notice, it seems likely that some of his memory is lost, or at least hidden, though he has come away from it with a desire to avoid any human connection that might one day cause pain for him or others. Though much of this volume focuses on Miharu’s slow realization that it is impossible for him to remain free of the human connection he so fears, it is also clear that most of his protectors do not actually see him as Miharu, but rather as a vessel for something else, and it is that they are sworn to protect, not him. Whether it will be a relief or a source of pain for Miharu when he truly realizes this remains to be seen. Miharu’s apathy is coupled with a devilish, smart-aleck sense of humor, which helps provide a little life and contrast for the character but also further demonstrates his intense need to put up walls between himself and others.

The next most intriguing character in this volume is Miharu’s English teacher, Kumohira, who also happens to be the leader of the Banten Shinobi, and it is he who at this point may be the only potential exception in terms of how he views Miharu. Though no real detail is given in this volume, it is clear that his connection to Miharu is something greater than perhaps even he knows. He also has an unusual fear of riding in any kind of vehicle, a fact that is played for laughs (and quite good ones) in this volume, but which may have deeper roots.

The supporting cast in general has quite a bit going for it, particularly in Aizawa, Miharu’s seemingly nerdy classmate who turns out to be a pretty kick-ass ninja without losing his core personality, and spunky wanna-be samurai Ramei who has a strange inability to tell people apart. From the other side, in addition to the Grey Wolves’ run-of-the-mill villains, there is also a horribly frightening boy who uses a forbidden technique called “kira” which allows him to shoot pieces of his own life force into the bodies of his opponents, controlling them from the inside, which inevitably leads to some fairly gruesome scenes. Though none of these characters is wholly original, and certainly the same could be said for the story itself (insert comparisons to Naruto here), like the story, they are still fun, quirky, and unexpectedly dark, offering more than their cliches would suggest.

Yuhki Kamatani’s art is one of the highlights of this manga. The action scenes are clean and easier to follow than a lot of shonen manga, thanks to a very effective use of contrast, and the artist’s style is quite expressive, making the most of her attractive character designs.

Overall, Nabari No Ou is a funny, energetic, visually compelling, nicely dark shonen manga, and a surprising new favorite for me!

Volume one of Nabari No Ou will be available on May 31st, 2009. Review copy provided by Yen Press.