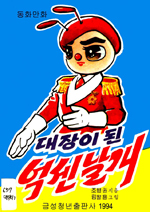 Welcome to another Manhwa Monday! I type this column from my sickbed, where I’m feeling weary and, frankly, old as I realize that to me, that title is a Marx Brothers reference, but to the rest of you… probably not.

On to the topic at hand: as if answering a call from the depths of my heart, Manga Critic Kate Dacey recently visited the “Korean Comics: A Society Through Small Frames” exhibit at the San Francisco Public Library and wrote up a detailed report in her blog, including footnotes and suggested reading.

Something Kate notes in her article, which has been pointed out previously by readers familiar with the manhwa scene in Korea, is just how little the English-translated manhwa we see here represents Korean manhwa as a whole. As a fan of what’s currently being translated, I’m not necessarily complaining, but it would be exciting to see a broader spectrum of work being offered in English.

The exhibit is open through June 13th. Check out the library’s website for more information, and be sure to read Kate’s wonderful article! ETA: Also! Kate follows up her visit to the exhibit with Ten Must-Read Manhwa. This entry should not be missed!

Elsewhere in the blogosphere, ComicBitsOnline hosts an article by James Mudge, Manhwa in Film, “From Page to Screen – Korean Manhwa Adaptations,” a detailed look at the influence of manhwa on the Korean television and film industries.

2010 Eisner nominations have been announced, with the “Best U.S. Edition of International Material-Japan” renamed to “Best U.S. Edition of International Material-Asia,” presumably to accommodate the awards’ first ever nomination of Korean manhwa–Kim Dong Hwa’s Color of… series (First Second). Though personally I’d have loved to see Byun Byung-Jun (my favorite translated manhwa-ga of the past year) honored in some category or other, the news is exciting indeed! Deb Aoki has details at About.com.

On the publishing front, bloggers like David Welsh and Kristin Bomba report that a print volume of NETCOMICS’ There’s Something About Sunyool is listed in this months’ Previews. Interestingly, the plot as described sounds very little like the three chapters I read when it was first released online, so I’m thinking that I really need to catch up!

On to the reviews! Here at Manga Bookshelf, I review volume ten of one of my favorite manhwa series, One Thousand and One Nights (Yen Press). At the School Library Journal’s Good Comics for Kids, Snow Wildsmith takes a look at volumes 1-5 of Bride of the Water God (Dark Horse). At Slightly Biased Manga, Connie checks out volume one of The Summit from newly-revived publisher, DramaQueen. Ken Haley at PopCultureShock reviews volume eight of Black God (Yen Press). And Tiamat’s Disciple checks out the final volume of You’re So Cool (Yen Press).