One Thousand and One Nights, Vol. 10
By Han SeungHee & Jeon JinSeok
Published by Yen Press 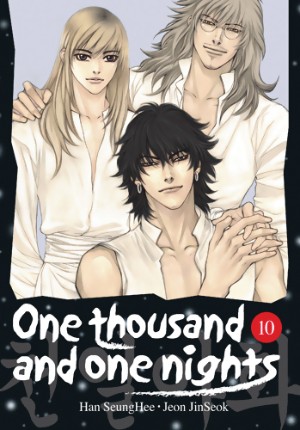 While reading Sehara’s translation of The Romance of the Three Kingdoms, it becomes clear to McLeod that Sehara is leaving him, though this realization comes too late for him to stop it. Unfortunately, as Sehara rushes back to Baghdad, he is met with the news of Shahryar’s death, throwing him into a state of deep despair. Meanwhile, Shahrayr (not quite dead) finds himself in the care of the Nauar Gypsies, one of whom beseeches him to travel east to seek out his “other half,” whom Shahryar now recognizes to be Sehara.

Though Sehara and Shahryar spend the entirety of this volume apart, the volume is a gift to BL fans and anyone else who might be hoping against hope that their highly eroticized relationship actually turn to romance. Not that anything happens, of course, but there is a sense that if our story’s heroes ever manage to find their way back to each other, it will be a warm reunion indeed.

Fortunately, the romance is well-earned and should hold up nicely, even with Shahryar’s bloody past as an obvious moral obstacle. “You were already dead, drowned in a whirlpool of sin,” a gypsy tells Shahryar. “And then someone brought you back to life.” It’s a tricky business–letting a character with so much blood on his hands realize happiness–but writer Jeon JinSeok has worked hard to create a situation in which this could be palatable. Now with only one volume remaining, we’ll soon find out what Jeon really has in store for the characters he’s so carefully tortured. Er. Nurtured.

With the stakes so high in the main story line, it might be easy at this point to dismiss Sehara’s stories-within-the-story, but fortunately The Romance of the Three Kingdoms (even in such an abridged state) is far too compelling to allow it. Part of what makes this series work so well is the fact that Sehara’s stories consistently move the primary tale forward, rather than acting as diversions. And part of the series’ charm is the fact that these stories are at least as important to their storyteller as they are to the sultan they are meant to entertain–a truth delightfully accented at the end of this volume as Shahryar sets out disguised as a bookseller in hopes of luring a distraught Sehara out of hiding.

Every aspect of this series remains engaging–storytelling, plot, characterization, artwork–crafted into a kind of ultimate fantasy with its lush, period settings and unapologetic violence. Fans of escapist romance could hardly find an escape more delicious than One Thousand and One Nights.