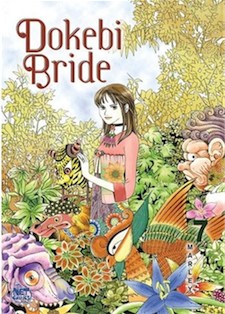 First things first! The winner of last week’s giveaway is commenter Eva D., who will receive volume one of Yen Press’ Goong: The Royal Palace! Eva, drop me an e-mail with your address and I’ll send it right out!

This week’s featured review is Noah Berlatsky’s thoughtful look at the first six volumes of Dokebi Bride (NETCOMICS) over at Comixology. Though he spends a surprising amount of time trying to reconcile the series within Japanese demographic categories which seems, at best, a pointless exercise, it is a beautiful review of a gorgeous series that remains, to this date, sadly unfinished. “The book, like many ghost stories, is about grief and dislocation and how the two circle around each other like black, exhausted smudges,” he says early on in the review–an observation indicative of the its eloquence as a whole. The review is honestly a great read and I’d recommend it whether you’ve read the series or not.

One quick update here at Manga Bookshelf: I’ve added a page of Manhwa Links & Resources. It’s fairly limited so far, so feel free to drop me a link or two!

From the blogosphere, Deb Aoki at About.com lists 25 Manga Milestones, and the emergence of manhwa in North America comes in as number sixteen. She’s also conducting a reader’s poll to determine the Best New Korean Manhwa of 2009, so head on over and place your votes! At Precious Curmudgeon, David Welsh reveals his vote and I do the same here at Manga Bookshelf.

On to the reviews! Yulianka at Wordcandy Bookshelf posts a series of enthusiastic mini reviews of Yen Press titles, including several manhwa. At i ♥ manga, Lorena Nava Ruggero reads volume 1 of Moon Boy (Yen Press). Julie Opipari reviews volume 7 at Manga Maniac Cafe, as well as volumes 2 and 3 of Legend (Yen Press). She also checks out volume 4 of Comic (Yen Press) for Mania.com.

At Kuriousity, guest reviewer Marsha Reid takes a look at volume 1 of Time and Again (Yen Press). Anna at Tangognat talks about volumes 1-3 of Let Dai (NETCOMICS). Sheena McNeil reviews both volumes 4 and 5 of I.N.V.U. (Tokyopop) at Sequential Tart, and Danielle Leigh jumps on the Raiders (Yen Press) bandwagon over at Comics Should Be Good.

Finally, a couple of books we haven’t seen here yet, nightfox at Confessions of a Closet Otaku checks out the first five volumes of I Wish (Tokyopop) and Azizul Rahman reads Cyber Doll (Anjung Taipan Sdn Bhd) at the star online.

That’s it for this week’s news!