Roaming the earth in search of humans to feast upon are the Titans–giant, monstrous creatures of mysterious origins which nobody completely understands. In order to protect itself, humanity literally walled itself off from the outside world. The Titans are nearly invincible and very few people manage to live through a direct encounter with them, but Kuklo is one such survivor. Swallowed whole by a Titan while still in his mother’s womb, against all odds Kuklo was somehow saved. However, he has never been able to completely rid himself of the stigma of being born the “son” of a Titan. Feared and hated during a time when very few people have actually even seen a Titan, Kuklo is an orphan who is abused, held captive, and treated as a sideshow oddity. As he grows older he desires nothing more than to escape his cruel fate and to prove to himself and others that he is indeed human. And though his birth was ill-omened, Kuklo may in fact be the key needed to unlock humanity’s full potential in the fight against the Titans. 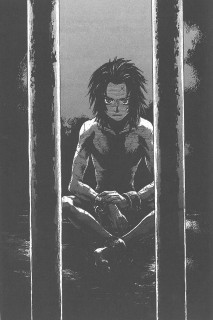 Since I have been reading the ongoing Before the Fall manga series, I was already familiar with a fair amount of the story of Kuklo Unbound and wasn’t especially surprised by any of the developments. I do think that out of the two versions the original novels are the stronger, though. The manga doesn’t always capture the internal thoughts and feelings of the characters very well, and that perspective is very important to understanding Kuklo Unbound. I feel that Kuklo Unbound is better written than the first Before the Fall novel, too, or at least it was overall more enjoyable to read. Parts of Kuklo Unbound did feel very repetitive–there was a tendency to restate obvious and well-established plot points and even use the exact same descriptions over and over again–but for the most part the pace of the narrative is quick enough that the redundancy wasn’t too frustrating. As a whole, many of the characters in Kuklo Unbound seemed to be slightly better-developed and less reliant on worn tropes when compared to those of Before the Fall, too.

Kuklo Unbound works well as an omnibus, telling Kuklo’s entire story, but the two novels contained are distinct in their focus. In the first novel, Kuklo is the undisputed star. In the second novel attention is still primarily turned towards Kuklo, but by that point in the trilogy the story is really about the Vertical Maneuvering Equipment, the most recognizable technological innovation to be found in Attack on Titan. The predecessor of the Vertical Maneuvering Equipment was created in the Before the Fall novel, so this ties the prequel together quite nicely. While being different from most other Attack on Titan stories, the prequel trilogy also feels familiar, incorporating the types of scenes that have been seen before, including deadly battles with Titans, political intrigue and religious turmoil, and intense military training sequences. What makes Before the Fall and Kuklo Unbound particularly interesting is that they serve as an origin story, showing not only the development and implementation of the Vertical Maneuvering Equipment, but also the beginnings of the Survey Corps when it was still celebrated instead of despised.

Hajime Isayama’s manga series Attack on Titan has become extraordinarily successful not only in Japan but worldwide as well. The series has inspired numerous manga spinoffs, anime, games, and more. Attack on Titan: Before the Fall is the first of three light novels written by Ryo Suzukaze and illustrated by Thores Shibamoto which serve as a prequel to Isayama’s original series. The second and third novels have been adapted as the manga series Attack on Titan: Before the Fall, illustrated by Satoshi Shiki, which is being released in English by Kodansha Comics. The first Before the Fall novel, however, was licensed and released by Vertical in 2014 with an English translation by Ko Ransom. Currently the novel, which was originally published in Japan in 2011, is chronologically the earliest story set in the Attack on Titan universe. I’m fascinated by the Attack on Titan phenomena and the large fanbase that it has developed, not to mention the series itself, so I was very interested in reading the Before the Fall prequel.

Angel Aaltonen may be young, but his ingenuity is impressive. A master craftsman, he and the others at the workshop he is a part of strive to design, create, and improve the weapons used in humanity’s fight for survival against the Titans. Except that Angel has never actually seen a Titan. Neither has most of the human population which seeks safety within a series of enormous walls. But while for a time they may be safe, they are also trapped by their own defenses. Only the members of the Survey Corps and Garrison forces have directly confronted the Titans, gigantic monstrosities that devour humans and bring destruction and terror. Even more dire is the fact no one knows how to stop or defeat the Titans. Angel and many others fear that one day the unthinkable will happen and the walls will fail. They are determined to discover the Titan’s weaknesses before that can happen, but the existing political and religious situation will make that prospect even more difficult than it already is to accomplish.

Most of the stories in Attack on Titan as a whole follow those characters who serve in the military–the people who are on the front lines directly fighting the Titans. Before the Fall, however, focuses on those who work behind the scenes to make those battles possible–the scientists, craftsmen, and engineers. (Granted, by the end of Before the Fall, Angel has become fairly hands-on himself.) It’s an interesting approach, giving a slight spin to an already familiar story, and one that I particularly liked and appreciated. Among other things, Before the Fall shows the development of some of the most iconic technology in Attack on Titan, the three-dimensional maneuvering gear. But as intriguing as the story is in Before the Fall, sadly the writing itself isn’t particularly engaging and the novel ends up being fairly slow going despite several intense action sequences. There were also a few frustratingly obvious oversights made by the characters; I found it difficult to believe that their logic would have been so flawed. Ultimately, I liked the premise of Before the Fall much more than its execution.

Although the writing might not be the best, where Before the Fall excels is in providing Attack on Titan with more thoroughly grounded worldbuilding, backstory, and lore. Suzukaze not only explores the development and creation of the equipment and weapons that will be used to fight the Titans, he also shows the beginning of the unrest between the general population, the military and government, and the religious cults and factions. There is enough of a basic introduction to the world that even readers who aren’t familiar with Attack on Titan should be able to easily follow Before the Fall, but the novel will appeal most to those who already know and enjoy the franchise. Before the Fall doesn’t tend to have the overwhelmingly bleak atmosphere of the original manga series, but it is still definitely a part of Attack on Titan, meaning that there are many casualties and several gruesome and horrifying turns of events. The air of dark mystery generally found in Attack on Titan remains in Before the Fall, as do the desperate punctuations of human hope and determination in the face of annihilation.