I almost passed over the English-language debut of Yui Sakuma’s Complex Age, but I’m very glad that I took the opportunity I had to read it. Complex Age, Volume 1 was first released in Japan in 2014 while the English-language edition of the volume was released in 2016 by Kodansha Comics. I believe that Complex Age is currently the first and only professional work by Sakuma to have been released. The manga began in 2013 as a one-shot which won the Tetsuya Chiba Award. (That one-shot is also included in the first volume of Complex Age.) Then, in 2014, Complex Age was relaunched as a series. While the original one-shot and the longer series don’t appear to be directly related when it comes to characters and plot, they do share a similar basic premise—an adult woman who is growing older and coming to terms with what that means for her hobbies and interests. I actually didn’t know that was what Complex Age was really about before reading the first volume. I thought it was simply about cosplay and since cosplay—the passion of the series’ main character—isn’t a particular interest of mine, I wasn’t anticipating that the manga would be story that I would end up so closely identifying with.

Nagisa Kataura is twenty-six years old, lives with her parents, and works as a temp worker for a tutoring agency, but in her spare time she is an accomplished and admired cosplayer. Her favorite character to cosplay is Ururu from the anime Magical Riding Hood Ururu who represents everything she wants to be as a person. Nagisa pours herself into her creations and is known for her attention to detail and high-quality work. She does all that she can to achieve perfection and to completely embody a character. However, despite cosplay being such a huge part of her life, she keeps her hobby a secret from her family and coworkers. Now that she’s an adult it’s become even more difficult for Nagisa to share her passion with people who aren’t already accepting of cosplay; it’s considered by many to be a frivolous hobby more suited for much younger fans. As she ages, Nagisa becomes more and more self-conscious about her cosplaying and the criticism that she receives becomes harder and harder for her to take. And yet Nagisa still loves what she does and cosplay is a very important part of who she is. 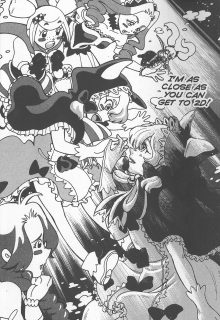 At first, I wasn’t sure that I really liked Nagisa. The opening chapter begins with her preparing for an event at which she will be cosplaying Ururu, putting an incredible amount of effort into making sure that everything is just right. But while she is at the event she is exceptionally rude and judgemental of the other people there, her behavior culminating in an outburst in which she harshly and publicly criticizes another cosplayer for not respecting the hobby and for not taking it seriously enough. However, as Complex Age progresses, Nagisa becomes a much more sympathetic, or at least understandable, character. The reason she is so sensitive is that her confidence, self-worth, and personal identity are almost irrevocably intertwined with her cosplaying. And so what Nagisa perceives as an insult to the hobby becomes an insult to her personally; when someone else is more talented or more physically suited to portray her favorite characters, she can only see her own faults and limitations being emphasized in comparison. She’s genuinely afraid that she is getting too old for cosplay and that voluntarily giving it up or being rejected by others because of her looks or age would result in her losing a large part of herself.

Before reading Complex Age I didn’t know much at all about the behind-the-scenes work that goes into cosplay, but the manga generally  incorporates those sorts of interesting details quite nicely into the story. I’m still not particularly interested in or personally invested in cosplay myself, but Complex Age still resonated with me a great deal. Like Nagisa, I’m an adult interested in media and hobbies that many people look down upon or generally associate with a younger age group (in my case, manga and comics among other things). I also know quite well and understand the dangers of allowing a passion to define one’s self or to impact one’s self-esteem. I have dealt with and, if I’m completely honest, continue to deal with many of the same uncertainties, insecurities, and struggles that Nagisa faces in Complex Age. While so far I do like the series, I think that the Complex Age one-shot about Sawako, a thirty-four-year-old woman letting go of her passion for dressing in Gothic Lolita fashion, made an even greater impression on me. (Also, Sawako’s husband is pretty great.) I’m very curious to see if Sakuma will take Nagisa’s story in a similar direction or if ultimately the Complex Age series will be a little less bittersweet than its predecessor.

Thank you to Kodansha Comics for providing a copy of Complex Age, Volume 1 for review.