This week, Kate, David, Melinda, and Michelle take a look at a slew of new releases from Viz Media, Digital Manga Publishing, TOKYOPOP, and Vertical.

Gente: The People of Ristorante Paradiso, Vol. 3 | By Natsume Ono | Viz Media – Comics, Italian Style — that’s how I’d describe Natsume Ono’s Gente, a series exploring the complicated personal lives of the people who work at and patronize Cassetta dell’Orso, the bistro featured in Ristorante Paradiso. Though Gente took a few volumes to find its footing, the third installment is magical: Ono’s men are dapper and virile; her women are bemused and tolerant; and the stories have the ebb and flow of real life, punctuated by moments of absurd humor or sadness that will remind movie buffs of Yesterday, Today, and Tomorrow and Marriage, Italian Style. If you don’t suppress a sniffle reading “Un Amore,” the story of a crumbling marriage, you’ve never experienced true heartbreak. Highly recommended, especially for fans of classic Italian cinema. – Katherine Dacey

Honey-Colored Pancakes | By Keiko Kinoshita | Digital Manga Publishing – This boys’ love anthology features five short stories, the first and last of which chronicle the bumpy relationship between Chiharu, a talented pastry chef, and Tougo, a handsome actor who’s as besotted with Chiharu’s desserts as he is with the hunky baker. The other three stories — “Tomorrow Will Be Rosy,” “A Clever Man at Work,” and “For Love” — also explore the formative stages of courtship, with characters screwing up the courage to confess their feelings or steal a first kiss. Though the book suffers from overly familiar scenarios, Keiko Kinoshita’s handsome character designs and discrete bedroom scenes make Honey-Colored Pancakes a good choice for readers who favor romance over smut. – Katherine Dacey

Kamisama Kiss, Vol. 3 | By Julietta Suzuki | Viz Media – One of the things I like best about this series is how it demonstrates Suzuki’s versatility. Karakuri Odette (Tokyopop) seemed to me to essentially be about talking through things until the characters understood their feelings. Kamisama Kiss is about feelings that sneak up on characters to the point that they don’t necessarily need to express them. In this volume, it’s fox spirit Tomoe’s chance to rescue accidental priestess Nanami from a difficult situation, though she’s hardly passive, and she’s pulled his fur out of the fire in the past. As our evenly matched protagonists grow closer, circumstances intervene to suggest that Nanami may not know her companion as well as she thinks she does. Suzuki seems quite assured at throwing credible, character-driven obstacles in the path of her maybe-lovers, which is a fine skill for a shôjo mangaka. -David Welsh

Kizuna Deluxe Edition, Vol. 2 | By Kazuma Kodaka | Digital Manga Publishing – What a difference a volume makes! The first installment of Kizuna was a bit of a mess, hopping around chronologically as Kadoka tried on a variety of drawing styles. The series finds its footing in the second volume, however, blending episodic stories about long-time couple Ranmaru Samejima and Kei Enjouji—Ranmaru wishes Kei would get a haircut, Kei gets upset when Ranmaru volunteers to step aside should Kei find a nice girl—with glimpses into the yakuza world (Kei and his half-brother, Kai, are the children of a notorious boss). I never expected I’d actually get into the latter, but I really enjoyed the suspenseful final chapter in this volume, in which Kai is hauled in by the cops on suspicion of dealing narcotics. I’m beginning to see why Kizuna is such a classic and now eagerly await volume three! -Michelle Smith

Rasetsu, Vol. 9 | By Chika Shiomi | Viz Media – In this series’ final volume, with Rasetsu’s 20th birthday upon her, she finally faces the demon who claimed her long ago. Though the ending has its twists, what really makes it work is the rich emotional framework that has defined the series all along. After all, Rasetsu’s worst demons are her own fears, and this what she and her quirky, self-made family must battle in the end. There’s nothing shocking here at all—no overwhelming drama to put a big “bang” on the ending—just a few, deeply damaged people who will work things out together the way they always have. It’s lovely, truly, and a perfect ending for this genuinely enjoyable series. Complete in just nine volumes, Rasetsu is a rare, short shoujo gem. Recommended. -Melinda Beasi

Sakura Hime: The Legend of Princess Sakura, Vol. 1 | By Arina Tanemura | Viz Media – I ordinarily approach a new Tanemura series with some trepidation, since I either loathe them or find that they’re better than expected. Sakura Hime doesn’t give a very good impression at first, as its first chapter is the whirlwind story of a spunky heroine learning that a) she’s the granddaughter of Princess Kaguya and b) that it’s her destiny to fight nasty demonic critters called youko. Everything seems generic, including the fact that she immediately falls in love with the fiancé she had claimed to hate, but when he turns around and tries to kill her… well, that spices things up a bit. I’m still not sure whether Sakura Hime is going to be a series I follow to its conclusion, but it has earned a second look, at least. -Michelle Smith

Silver Diamond, Vol. 9 | By Shiho Sugiura | TOKYOPOP – Rakan and friends continue to make their way toward the Imperial Capital, pausing to calm the spirits in a graveyard and befriend the inhabitants of a village. The pace of the story is as leisurely as always, but Silver Diamond can be counted upon to provide a calming, benevolent, imaginative, comforting, funny, and touching read nonetheless. Unfortunately, this is the final volume that TOKYOPOP produced, and it ends with a cliffhanger—Rakan has been put to sleep in order to prevent him from leaving the village and one of the residents is plotting how best to do away with his companions! Take heart, however! Silver Diamond is available in French, and if you’re not afraid of a little Google Translate action, continuing the story should be pretty easy. That’s what I intend to do, at least! -Michelle Smith

Twin Spica, Vol. 6 | By Kou Yaginumaa | Vertical, Inc. – “Graceful” is the word that most frequently comes to mind when I’m reading this series about students at a school for astronauts. The quintet of leads spends most of this volume learning more about each other, particularly rich, removed Marika. There are lots of comics about a group of young people who have a dream in common but not much else, but few of them are as delicate and understated in approach as this one. Heroine Asumi continues to bring out the best in her classmates, partly due to her kindness, partly due to the example she sets, and partly due to the vulnerability she displays. I think it’s quite an accomplishment to create a heroine who inspires both the desire to protect and the anxiety that already she’s miles ahead. Why wasn’t this series nominated for an Eisner again? -David Welsh

It’s another strong week for manga shipping into Midtown Comics. Check out our Picks below!

MELINDA: This is a tough pick for me, with new volumes of both Karakuri Odette and Natsume’s Book of Friends shipping this week. But I’ll put in my vote for volume nine of Shiho Sugiura’s BL-lite fantasy Silver Diamond, out this week from Tokyopop. From my review of volumes 1-4, “There is so much charm to Silver Diamond, I hardly know where to begin … Though characters are what I read stories for, Silver Diamond also benefits from strong world-building and a solid (if not wholly original) fantasy plot … Sugiura’s art is honestly gorgeous, with lovely character designs and just exactly enough detail to be both beautiful and easy to read.” Though I’d consider this series a casual read, sometimes that’s just the read a weary mind most requires. In times like these, Silver Diamond hits the spot.

DAVID: It is a tough week, or it would be if not for my personal curve breaker, Mitsuru Adachi’s Cross Game. The third omnibus, which collects the sixth and seventh volumes of the series, arrives this week, and it’s a treat. There’s a several significant turning points in this installment, all of which are wonderfully handled by Adachi. I’ve reviewed the first and second collections in this series, and I’ll probably review the third, because I will not rest until more people are reading this wonderful series.

KATE: Oh, the dilemma! After several weeks of slim pickings, I hardly know where to start: volume three of Cross Game? volume six of Karakuri Odette? volume six of Natsume’s Book of Friends? But if I had to choose only one title, it would be volume four of Neko Ramen, which is quite possibly the best manga Tokyopop is publishing right now. I know, I know: “cat opens noodle shop” sounds like a one-joke premise, but most of the humor stems from feline hero Taisho’s ill-advised promotions, unappetizing specials, and inability to learn from his mistakes as he tries to expand from humble stand to national chain. Yes, there are jokes about hairballs and scratching posts, and jokes that just aren’t funny, but on the whole, Neko Ramen is a smart comedy that’s edgy but never mean-spirited, poking fun at the absurdity of Taisho’s ideas while honoring his ambition and hustle.

MICHELLE: The plus side to going last this week is that each of you has cleared one possible contender from my list, and I heartily second each of your recommendations. While I am tempted to select the seventh volume of Shinobi Life, a shoujo tale about the romance between a modern girl and a ninja that is way better than one would expect, I think I will be the one to formally select the sixth and final volume of Karakuri Odette as my pick this week. I’ve enjoyed this quirky slice-of-life series a great deal, and even though I was less than enthused by the addition of wife-seeking robot Travis in volume five and am therefore somewhat troubled by Odette’s bridal attire on the cover, I’m still eagerly looking forward to seeing how it all ends.

So readers, what are your Picks this week? 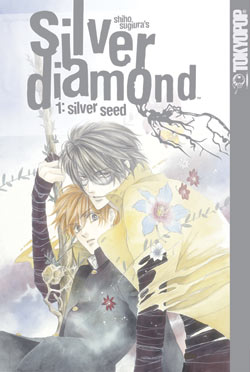 Rakan Sawa is a relatively normal seventeen-year-old boy living on his own after the death of his mother and grandfather. He likes to study, cook, and take care of the house, and he craves normalcy on all fronts. So he’s got this little issue where the trees and flowers in his yard seem to grow abnormally well, so what? Even when things aren’t quite normal Rakan can do his best to ignore them, and he’s awfully popular at school for all the lovely cut flowers he brings in every day. Unfortunately, all pretense of normalcy flies out the window when a tall, handsome man falls into his backyard from another world. …