I hit a bit of a pandemic wall in my manga reading, so hoping to feel less bad about my backlog by posting some quick takes on my recent reading. Maybe I’ll have more energy next month!

Yona of the Dawn 28 by Misuho Kusanagi 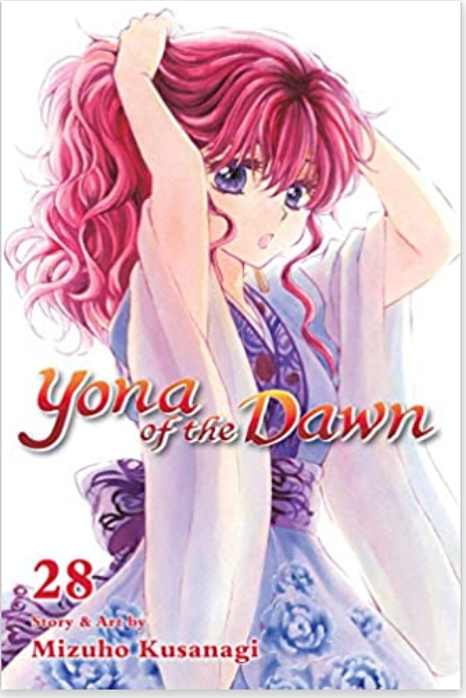 Yona of the Dawn is such a consistently satisfying fantasy series with a depth and nunace that few authors are able to pull off. This volume was extremely amusing to me because it featured Tae-jun freaking out a bunch. Tae-jun was extremely worried about his not very great covert support of Yona possibly being found out by his older brother and chief of the fire tribe Kyo-ga. Tae-jun also had the best hysterical facial expressions when he yelled about the need for separate rooms for Hak and Yona. All along as Yona has been traveling the country helping people, there have been hints of what might happen if a cult of personality develops around her as the true heir to the Crimson Dragon King and her new Four Dragon Warriors. These undercurrents were brought to the surface by Su-Won’s advisor lurking around being menacing to anyone in his vicinity. There’s clearly more conflict coming with both political maneuvering and with upcoming battles, but this was a great spacer volume with plenty of wonderful character development moments. 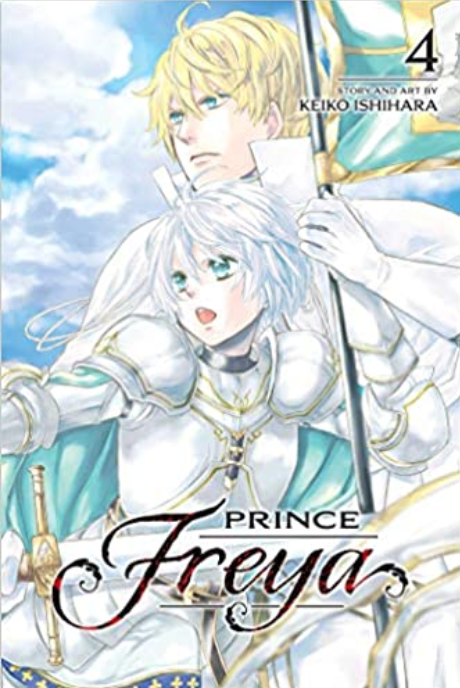 I have come to realize that I read this manga much like I would read a Harlequin romance. Are there inexplicable plot twists? Yes! Do I care about really understanding what’s going on? Not so much! While there are no cases of pregnesia in this manga we do get the shocker of Aleksi coming back from the dead in the company of a group of forest people who express just how metal they are by wearing stag skull masks and making vague pronouncements in an odd tone of voice. Meanwhile, Julius continues to develop more feelings for his charge, and Freya as Prince Edward manages to inspire her subjects even more. An additional complication comes up when Freya has to meet the emotionally unstable king and attempt to pull off a much more complicated bit of acting. This is one of those series that I just read, let wash over me, and don’t worry about the plot twists and complications. I’m expecting some love triangle shenanigans with Julius and Aleksi in the next few volumes, along with the swashbuckling battle scenes that have become a fixture in this manga.

In three volumes Prince Freya has evolved into an enjoyable fantasy potboiler of a manga, with plenty of cliffhangers to keep the reader’s interest as well as a tendency to kill off sympathetic supporting characters. The story ratchets up the suspense because it seems clear that no one is safe from medieval mayhem in this story of a simple girl forced to masquerade as the charismatic Prince Edvard. As the manga opens, Freya is displaying her characteristic tendency to put herself in danger in order to save anyone in her near vicinity as she tries to rally the soldiers in a small fort against an enemy invasion. 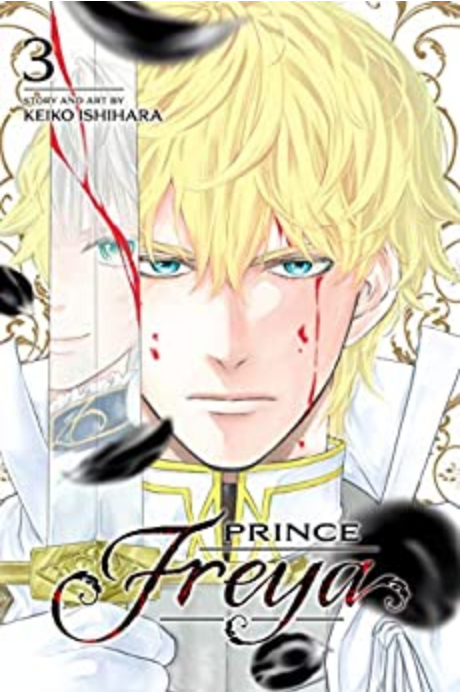 The White Knight Julius is now Freya’s main protector after the deaths of her childhood companions Alek and Aaron. Does Julius start experiencing conflicting emotions about his new charge? Does one even have to ask when this is shoujo manga that we’re talking about??? Freya’s actions show her motivating her soldiers with a different type of charisma than the late Prince Edvard as she makes a point to get to know all of the men in the fort who are trying to defend her. She’s not afraid to take part in tactical maneuvers in order to confuse the enemy, and while the extent to which she is willing to sacrifice herself might seem extreme, when balanced at all the family and friends she’s lost in her life the reader can see why she’s resistant to seeing anyone die unnecessarily. There’s medieval battle scenes galore and an enemy soldier making fun of Julius for being a pretty boy, so there’s plenty to enjoy in this volume, which ends on an incredible cliffhanger that promises plenty of angst in the next volume. This manga isn’t particularly deep, but it does serve up plenty of gender-swapped shoujo medieval action which I am finding to be delightfully distracting in these current times.

I enjoyed the premise and setting of the first volume of Prince Freya, even though I thought there were a couple pacing issues. I was curious to see if the next volume would feel a little more settled, and I’m happy to report that this volume felt much more cohesive as Freya settles into her new life as Prince Edvard, fending off evil plots and throwing herself into the action as much as possible. The volume picks up as Freya as Edvard attempts to save the royal guard Mikal from being kidnapped, only to put herself in danger in the process. 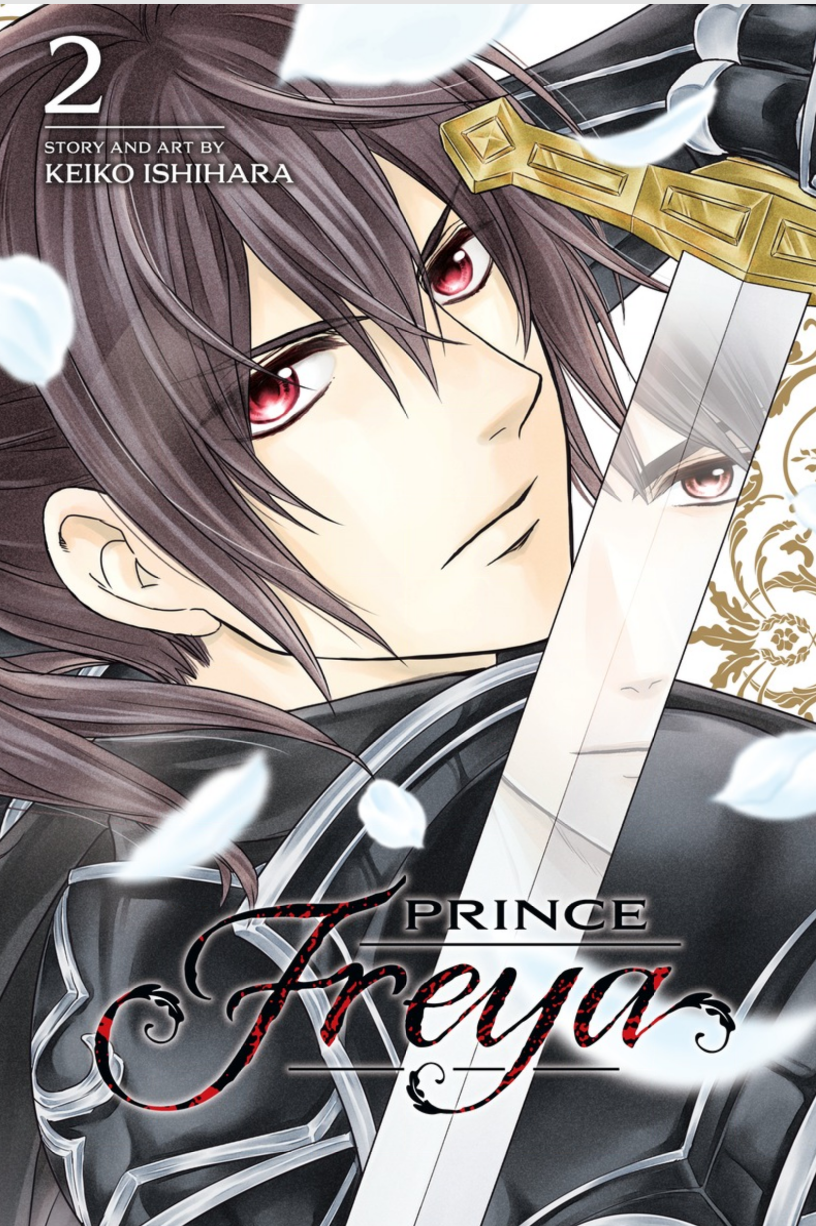 I’ll be honest, one plot point that I do enjoy about reverse harem scenarios where girls have to disguise themselves as boys is how often the boys surrounding the heroine start feeling oddly protective of their new companion and aren’t sure why their feelings have shifted. This happened multiple times in Prince Freya, so I found myself greatly enjoying the sillier aspects of the character dynamics. Mikal finds himself newly intrigued by Prince Edvard now that Edvard seems to have received an abrupt personality transplant. Freya is fiercely loyal to her friends, including people that she’s just met in her new role.
Aleksi and Julius head off to the rescue, and while they fend of danger with some help from Freya, Julius delivers a stern lecture about the responsibilities for self-protection that have to be present in royalty or someone disguising herself as royalty. Freya vows to protect everyone, including Julius, which causes him to be quite emotionally shaken.

As the story unfolds, Freya’s open personality cause her to strike up an unlikely friendship with one of Prince Edvard’s subjects, but her good intentions end up creating even more difficulties that are only solved by some bold action. The art in Prince Freya continues to be clear and dynamic, which is essential due to how many scenes involve combat by swords. One aspect of this manga that I found both intriguing and a bit startling is the body count that is starting to build up as Freya navigates her new world. It is true that there’s an inherit danger to being faux royalty, but I’m starting to find myself a little anxious about the survival prospects for anyone close to Freya. The cliffhanger at the end ensures that I’m already impatient for the next volume.

I really liked Ishihara’s other series The Heiress and the Chauffeur, which was only two volumes but left me wishing I could read a longer series by the author. I’m always up for shoujo fantasy, and “girl who must disguise herself as a boy” is one of my favorite plot elements so I have been eagerly waiting to read Prince Freya. 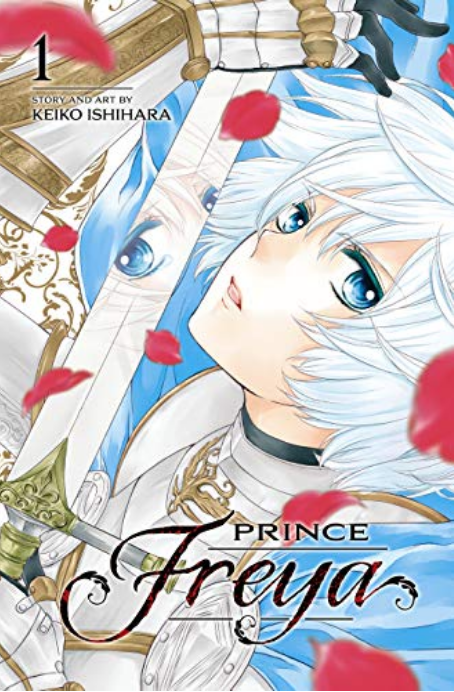 Freya lives in the quasi-medieval setting that is very familiar to fantasy fans. She likes to casually jump off cliffs and is a well-beloved figure in her village, as she heads to town to fetch items for her ailing mother. Her adopted older brothers Aaron and Aleksi return home for a visit. Aaron is the famous Black Knight who guards the Prince and Aleksi seems mostly content to remain in his older brother’s shadow. There’s a bit of a budding romance between Aaron and Freya, but Freya quickly gets caught up in court intrigue though. Due to her habit of hanging out in high trees she overhears a plot to attack Aaron and the palace. She sneaks in and discovers that the prince ailing, and Freya is his exact duplicate. Far too quickly, she assumes his identity and manages to pull off a stupendous impersonation as the prince. This comes out of nowhere, I would have appreciated a brief 2 page prince training montage to at least address how on earth this happens. Freya’s Prince Edvard is both arrogant and charming, which contrasts with her more naturally retiring personality, putting aside the cliff-jumping and tree climbing.

There’s a terrible tragedy, but Freya is drawn even more into her deception after the prince dies and she has to make sense of what the small circle of courtiers around her is telling her to do as she continues to play along with hiding the prince’s death so the enemies of her country don’t catch on. The art is clear and expressive, and Freya and her quasi-adopted siblings are sympathetic characters. I’m hoping that the second volume has some time to slow down a little bit and let the story unfold a little more gradually. I’m very much looking forward to the second volume.