nora the last chronicle of devildom 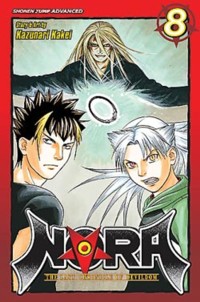 Just a few quick links today to point out a few short reviews of mine over at Manga Recon this week. First of all, I checked out volume eight of Nora: The Last Chronicle of Devildom for a bonus edition of Manga Minis on Tuesday. With the huge advancements in character development made over the last two volumes, this volume pales a bit in comparison, but it’s still a solid end to the Fall arc, making way for the possibility of something greater than what the series has offered up to this point. If Nora and Kazuma really can change their fate, that will be an exciting goal to pursue and will hopefully keep the series on the upward track it discovered a few volumes back.

I came in to Nora a bit late as a reader (something that is suddenly very much related to a recent Twitter conversation on the question of whether or not individual volumes of manga can/should be able to bring a new reader into a series at any point) and one thing I must give the series credit for is just how easy that was to do. The story’s characters are always exactly themselves–no more, no less–which not only makes them unusually hospitable to newcomers, but also makes it all the more thrilling to watch them grow. I look forward to seeing more of that as the series continues. 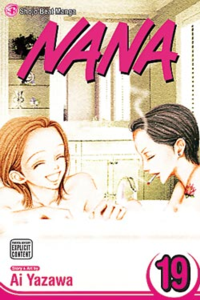 Also, in today’s installment of On The Shojo Beat, I review the latest volumes in two series, the first being volume nineteen of NANA, a long-time favorite of mine as you all surely know. This was a rough volume for me emotionally, thanks to my strong identification with a particular character and the serious pain she’s got waiting on deck for her right now. I’m struggling to avoid spoilers here (I even tried a bit in the review itself, though it was pretty rough) so suffice it to say, “ouch.” There’s a strong sense of impending doom for everyone in the series at this point, one way or another, but Yazawa always avoids that hopeless soap-opera rut in which it is obvious at all times that nothing good can ever really happen for anyone. Along with the sense of impending doom is a small voice suggesting that perhaps, after everything has exploded and the dust has finally cleared, it might actually be a better world for the survivors of this little universe. The story may be dramatic and filled with tragic misfortune, but its characters are ultimately in charge of their own destinies and there is never a complete lack of hope for any of them. 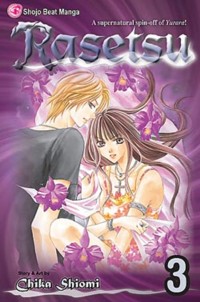 Lastly, I review volume three of Rasetsu. I was a bit harsh on this volume, I’ll admit, but I really feel strongly that if it is going to survive on its own, independent of the series it spun off from, it’s going to need to cut the cord–the sooner the better, as far as I’m concerned. Though Yako is certainly doomed to carry around sadness over the loss of his first love for quite some time, it’s more important to develop the story’s new characters than it is to come back to that issue over and over. It can’t be allowed to drop, of course, but there are much more subtle ways of handing it than what we see in this volume. I have some level of fondness for this series so far, so I’m really rooting for it to come into its own. Hopefully we’ll see that happen over the next few volumes!

So, check out these reviews and more over at PCS’s Manga Recon!

As the battle with Fall continues, Nora’s body has been put under the control of Fall’s ally, Deuce, whom Fall later kills without a moment’s hesitation when she is overcome by the combined efforts of Nora and Kazuma, an action which shocks Nora to his core. When Fall uses his power to transport their battle into the human world, Nora’s determination not to let any more of his friends die lends him enormous power, but in the end it is his relationship with Kazuma that gives him the power he needs to fight against Fall’s efforts to absorb his power.

After two volumes of action, revelation, and fairly significant character development, this volume, which consists mainly of action without all that much of the other two, is a bit of a letdown. Granted, there are some new developments for Fall, especially in terms of his relationship with the former Cerberus, Deigree, but Nora’s big declaration, “I’ll win ’cause I’ve got something worth fighting for!!!” seems anticlimactic now that his awareness of the importance of friends is a couple of volumes old. The relationship between Nora and Kazuma is still the most compelling thing about the series and there are definitely advancements made here, but they are a bit lost in the din of battle.

What would have been a pretty exciting volume earlier on in the series fails to quite live up to the new heights reached in the last two volumes, but the conclusion to this storyline is still quite satisfying in the end. Whether Kakai can continue to build on the series’ new strength from this point forward remains to be seen. 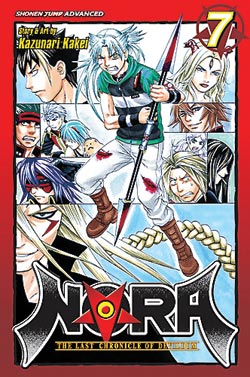 As the dramatic battle that began in volume six continues, power-crazy villain Fall has the Dark Liege cornered, thanks to the revelation of a new and unexpected power. Meanwhile, Nora and Kazuma face their own foes along with other members of the Dark Liege’s army. Still reeling from the news of Nora’s intended fate as the current Cerberus (who is expected to one day pour all of his power into Kazuma–the next Dark Liege–sacrificing his own life in the process) they both fight fiercely and with more feeling than ever before, determined to see this battle through and find a way to bring balance to the demon and human worlds in their own way–one which does not conform to the tragic customs of the past.

Although several of its fight sequences come close to being too long, for the most part this volume manages to keep up the considerable tension and dramatic momentum set into motion in volume six which is, surprisingly, one of the series’ new strengths. Though it offers nothing significantly different from most standard shonen fare, Nora has finally found its groove, particularly in terms of characterization which has advanced substantially over the last two volumes. Nora, especially, has gained new depth since discovering the grim truth about his fate, learning to truly value not only his life but the lives of those who care for him. Though his refusal to let the current Dark Liege calmly accept her own defeat is pure shonen formula, his delivery (“Nobody could ever replace a pain in the ass like you!”) is so charmingly in-character, such judgements are easily dismissed.

Another pleasant bit of characterization that has begun to take shape over the last two volumes is the changing relationship between Nora and Kazuma. Its development has been slow and painful (if often humorous), evolving finally into an uneasy camaraderie that feels especially nuanced and fragile for this kind of story. As in any relationship with a significant power imbalance (Kazuma, after all, has the power to allow or forbid Nora’s use of his own magical abilities with no more than a word, effectively holding Nora’s life in his hands) mutual trust is incredibly difficult to achieve, but in response to the new revelations regarding their shared fate, the two have forged a bond between them, fashioned out of an unlikely combination of fury, indignation, and hope.

Though this series has a ways to go before it can hope to stand up to the best titles of its genre, Nora: The Last Chronicle of Devildom has finally landed on its feet, becoming a solid choice for fans of shonen manga. 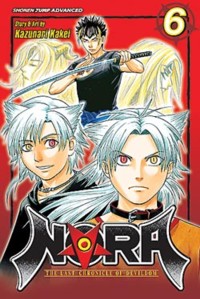 This volume takes a dramatic turn as Nora and Kazuma are given a window into the past where they learn the truth about themselves, their destined roles, and the history of Fall, leader of the Resistance. Not that either of them are given much time to process this new information as immediately upon their return to the present, Resistance forces invade headquarters, covering the entire area in a force field and trapping the Dark Liege inside to face Fall alone. As the Dark Liege’s army fights their way through the barrier in order to save her (and maintain balance in the demon and human worlds), Nora also learns an important lesson about the value of friendship, though it comes at a terrible cost.

With Nora’s discovery of his true purpose and the real nature of his bond with Kazuma, this series takes a much-needed foray into darkness, providing exactly the kind of compelling, painful drama it has lacked up to this point. Though the series’ art is still unremarkable, the characterization has grown immensely in just a single volume. Though the primary villain, Fall, remains flat and uninspiring, both Nora and Kazuma have benefited measurably thanks to their greatly heightened stakes. Whether this new depth can be maintained remains to be seen, but it is a big step in the right direction.