Maid-sama! Volumes 1 and 2 by Hiro Fujiwara

It has been some time since I’ve read this series. I think I read around 4 or 5 volumes or so of the Tokyopop release, so the new omnibus from Viz provided a good excuse to give the series a second try. I totally understand why Maid-sama! would be a strong title to re-release since it has an anime adaptation too. However, a tiny part of me will still hope in vain for some reissues of some of the other less commercial series that got cut off when Toykopop went under.

The maid in this title is Misaki Ayuzawa, a high achieving girl who has become president of a school that has only recently gone co-ed. She’s uncomfortable around boys and has made it her mission to clean up the school and abolish delinquent behaviors in order to protect the small female population. She’s super stern and has great physical prowess when it comes to beating up her fellow students. While she’s a perfect student at school, Misaki has to make ends meet by working as a waitress at a maid cafe as her part-time job. In the first few pages of the manga, Misaki’s secret is discovered by Takumi Usui, a popular and somewhat cynical boy who attends her school. He promptly decides to hold Misaki’s secret over her head and begins to pop up now and then whenever something might go wrong.

Misaki navigates issues with student-council relations, dealing with a rival school, and navigating random cross-dressing events at her part-time job. Aside from the relationship between Misaki and Usui, the manga is pretty entertaining, as Misaki’s outsize reactions to everything gradually begin to mellow out a bit as she begins to relate to all the students at her school as human beings, not just the girls. I had also totally forgotten about the idiot trio, a group of background characters that also discover Misaki’s secret identity as a maid and mostly function to gaze at her adoringly and act occasionally like a slapstick Greek chorus. Fujiwara’s art is clear and easy to follow, and very dynamic when Misaki is leaping into action to defend womanhood or juggling a ton of customers at her part-time job.

The part of this manga that bugs me and I think contributed to my decision to stop reading it before, is that Usui is utterly unappealing as a shoujo male lead to me. His general mode of interaction is to randomly show up, invade Misaki’s space, and make her feel confused and flustered. He also keeps forcing physical affection on Misaki when she’s not a willing participant, as some sort of power game. Also, Fujiwara goes to great length to demonstrate Misaki’s physical prowess when her being strong is funny or over the top, but Misaki suddenly becomes weak and incapable when it serves the purpose of the plot to have Usui rescue her from herself. He’s also constantly reminding Misaki that she’s a girl who needs help, and it only serves to make it appear like the main message of this manga is that a girl with strong type A tendencies needs a man to help her out. For folks who aren’t put off by this relationship dynamic, I do think that Maid-sama! is plenty entertaining. I just find series like Oresama Teacher or My Love Story! much more amusing if I’m looking for something fun to read in the shoujo comedy genre. 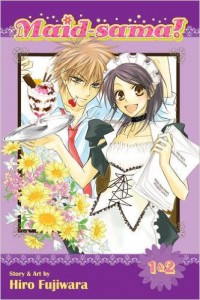 Maid-sama! is an eighteen-volume manga series created by Hiro Fujiwara. The series was initially licensed for English translation by Tokyopop, which released the first eight volumes of the manga between 2009 and 2011. More recently, Maid-sama! was rescued by Viz Media. The manga is being released under the Shojo Beat imprint in an omnibus edition, each English-language omnibus collecting two volumes of the series’ original Japanese release. The first Maid-sama! omnibus was published in 2015 and includes the first and second volumes of the manga published in 2006 and 2007 respectively. (The first volume also contains Fujiwara’s earlier short manga “A Transparent World.”) Maid-sama! was Fujiwara’s first major success as a mangaka. However, it wasn’t until Viz’s release of Maid-sama! that the series came to my attention when I noted the enthusiastic response of fans surrounding its return. I was therefore very happy to have the chance to read a review copy of the first omnibus in order to see what the excitement was all about.

Seika High School, previously an all-boys’ school, has only been co-ed for a couple of years. The student population is still largely male—the boys outnumbering the girls four to one—and Seika High still has a bad reputation. And so Misaki Ayuzawa has decided to take things into her own hands, becoming Seika’s first female student council president in order to clean up the school’s act, improve it standing, and create a more welcoming environment for young women. Misaki rules over Seika with an iron fist, though not everyone appreciates her strength and intelligence or the changes she’s making. Because of that, she’s particularly careful to keep the fact that she works part-time at a maid cafe a secret; she doesn’t want to ruin her image or risk losing what little authority she has. But then her classmate Takumi Usui discovers how she’s spending her time after school. Misaki has caught his attention and interest, perhaps even romantically, though understandably she’s not very happy about the awkward turn of events.

I absolutely adore Misaki. She’s a smart, strong, motivated, hard-working, competent, capable, and highly accomplished individual. She’s not perfect though. Her drive to overachieve and handle everything by herself along with her reluctance to rely on the help of others means that she frequently overextends herself, wearing herself down. Misaki could stand to relax a little, but the believable combination of her strengths and weaknesses make her the most well-developed character in the series. While I love Misaki, I am significantly less enamored with Takumi. Sometimes he can be a great guy, but on occasion he can be an utter creep. His skills and talents match and even surpass those of Misaki, often in superbly ridiculous ways which are admittedly amusing, but he seems to frequently be emphasizing that she’s a girl as if that somehow makes her inferior. I want to see the Takumi who supports Misaki for who she is and who doesn’t feel the need to dominate her. Early on in Maid-sama! it seems this would be a possibility, but the more of the omnibus I read the less likely it appeared that the series would be going in that direction.

Although in part Maid-sama! is a romance, ultimately that particular plot line in the manga is the one that interests me the least. (If I actually liked Takumi more than I currently do, I would probably feel differently.) I enjoy the series most when it focuses on Misaki as she grows as a person. I like seeing her become less of a tyrant as the president as she learns to consider other people and their needs instead of completely overruling them without making an effort to hear their concerns. At first she is disliked by almost all of the students, but as time passes more and more of them, male and female alike, come to admire, trust, and appreciate her and where she is leading Seika High. Although there are certain things about Maid-sama! that bother me—most notably the distinct possibility of Takumi being idealized as a romantic lead—overall I did find the beginning of the series to be entertaining and a lot of fun. And since I do like Misaki so incredibly well, at this point I definitely plan on reading more of Maid-sama!.

Thank you to Viz Media for providing a copy of Maid-sama!, Omnibus 1 for review.

Welcome to another edition of Off the Shelf with MJ & Michelle! I’m joined, once again, by Soliloquy in Blue‘s Michelle Smith.

MICHELLE: Ne, ne, MJ? Know what’s awesome? Manga is awesome. I was experiencing the slightest sense of “meh” about manga last weekend, and then I read House of Five Leaves and I am cured.

MJ: Oh, those moments of renewal are so fantastic, aren’t they? And House of Five Leaves is certainly up to the task.

MJ: You know, I do. Maybe not as dramatically, but I’ve had a very good week in manga so far. 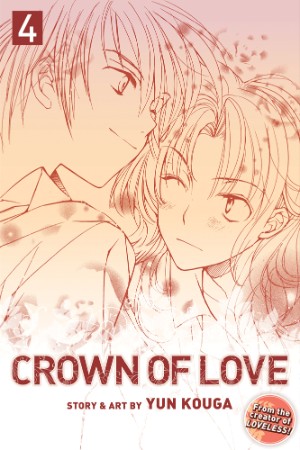