Jessica Chavez, a former localizer and editor for XSEED Games, has more recently turned to writing novels. Dead Endings, illustrated by Irene Flores, became her first published work. The novel was also among the first to be serialized in Sparkler Monthly, the online multimedia magazine from Chromatic Press. Sparkler Monthly‘s line of prose is influenced by the Japanese light novel format, aiming to provide engaging and easily accessible works of fiction with interesting characters and stories. I wasn’t previously aware of Chavez’s work before reading Dead Endings and I only vaguely recognized Flores’ name as an illustrator, but I was still very interested in reading the novel if for no other reason than it was released by Chromatic Press. Dead Endings was originally serialized between December 2013 and August 2014. The novel was collected and released in print in 2015 along with two additional side stories, “The Art… of LOVE” and “Rare Parrot Watching and Other Recommended Activities,” a bonus art gallery, and the short comic “Pancakes and Sex” illustrated by Crystal Jayme.

After nearly drowning off the coast of Miami, New Yorker and graduate student Cailen Delaney gained an especially unwelcome ability—she can now see ghosts. Not only that, they seem to be particularly drawn to her. So, when she’s not commuting to or from school or taking advantage of the fact that her roommate Gabriella is a part-time exorcist, Cailen doesn’t necessarily get out very often; she much prefers the company of a strong drink, whether it be coffee or booze, in the comfort of her ghost-free home. Enter Everett Jung, a young journalist-in-training who has his own peculiar way of sensing ghosts. He arrives at Cailen’s apartment looking for some assistance from Gabrielle as he investigates a series of murders that seem to be supernaturally linked. Gabrielle, however, is currently out of the country and so he settles on the reluctant Cailen instead. With enough persistence, Everett eventually convinces Cailen to help, but the case turns out to be much more dangerous than any of them expected. 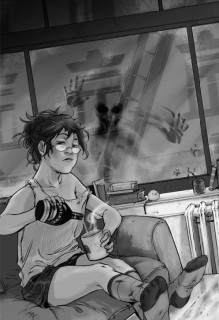 Supernatural talents aside, I found the characters in Dead Endings to be very relatable, especially Cailen. She’s vaguely cranky and cynical, snark and sarcasm being some of her favored modes of communication. As the main protagonist of the novel, her personality carries over into Chavez’s style of writing in Dead Endings, resulting in a casual-feeling narrative which doesn’t shy away from frankness or the use of strong language. Although underneath it all is a vein of horror, Dead Endings also has plenty of humor. Chavez strikes an excellent balance between the two—the novel manages to be both fun and frightening, either in turn or simultaneously. Dead Endings, in addition to being a darkly humorous supernatural thriller, is also a satisfying mystery. While Cailen, Everett, and Gabrielle are particularly interested in the stranger spiritual aspects of the case, essentially they are involved in solving a murder investigation.

Ultimately, Dead Endings is a near-perfect mix of horror, mystery, and humor with well-realized characters and an engaging story. While the additional stories included in the volume add more depth to the cast, generally in a more lighthearted fashion, Cailen is the most fully-developed individual in the novel proper. I loved seeing her character arc unfold. She starts out as someone who miserably puts up with the consequences of her abilities, but by the end she has wrested control of her own life back. However, getting to that point takes effort on Cailen’s part, instinctual self-preservation, and a deliberate decision to not fall victim to the frequently perilous circumstances she finds herself in. Dead Endings can be honestly chilling—supernatural encounters and ghostly possessions are threatening and the living can be just as menacing as the dead—but the novel never becomes overwhelming dark or grim. I enjoyed Dead Endings immensely and am looking forward to its sequel a great deal.