Although Ichi-F: A Worker’s Graphic Memoir of the Fukushima Nuclear Power Plant isn’t Kazuto Tatsuta’s first manga, it is very likely the one for which he will be best known. Based on his experiences as a worker at the Fukushima Daiichi Nuclear Plant, the memoir provides an important and highly personal perspective on the ongoing recovery efforts following Japan’s combined earthquake, tsunami, and nuclear disasters of March 2011. Initially submitted as an amateur work, Ichi-F won the Manga Open Grand Prize in 2013 which led to its continuation as a three-volume series published between 2014 and 2015. The English-language edition of Ichi-F was released by Kodansha Comics in March 2017. The entire series, including Tatsuta’s original one-shot, has been collected into a single, massive omnibus formatted to read left-to-right. Also included is an introduction by the journalist Karyn Nishimura-Poupée and an exclusive interview with the creator. A tremendous amount of work from the translator Stephen Paul and others at Kodansha has gone into Ichi-F in an effort to make the manga as accurate and as widely accessible as possible.

On March 11, 2011 a massive earthquake centered off of the northeast coast of Japan triggered a devastating tsunami which ultimately lead to multiple meltdowns at the Fukushima Daiichi Nuclear Power Plant. Many people in Fukushima were required to evacuate and have yet been able to return to their homes due to the radiation levels in the area. Cleanup and recovery work, including the decommissioning of the plant, continues to this day and will continue for quite some time. Most of the people directly involved in the work are from the Fukushima area but others like Tatsuta (a pen name taken from the region for purposes of anonymity) are outsiders drawn by the promise of high wages, personal curiosity, and altruism. Despite the need for workers, it took Tatsuta more than a year after the disaster to secure clearance for employment at Ichi-F, one of the local names for the Fukushima Daiichi plant. Initially he was assigned to a shelter where he helped to manage a rest area for the construction workers, but eventually he would become one of those construction workers himself, at one point even serving on a team working inside one of the plant’s reactor buildings. 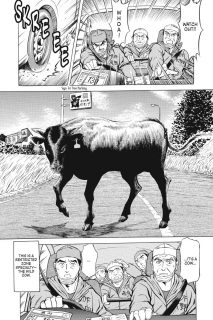 Ichi-F is primarily about the day-to-day lives and work of those employed at the nuclear power plant but Tatsuta also addresses some of the related recovery efforts and the issues caused by them in the Fukushima region as well as the some of the complications surrounding the publication of his memoir. In part the manga was created in response to the misleading, sensationalistic, and often inaccurate way that Fukushima and the surrounding areas are portrayed in the media. This is not to say there haven’t been problems with the decommissioning and cleanup–even Tatsuta’s account reveals social conflicts and questionable employment practices, not to mention that exposure to high levels of radiation is inherently dangerous–but some of Fukushima’s poor representation is due to ignorance and fearmongering. In fact, excepting the radiation concerns, much of the work outlined in Ichi-F, while being incredibly important, is outright mundane. Tatsuta explains in detail the safety procedures and regulations intended to protect the workers at the plant, showing just how difficult, time-consuming, and challenging the cleanup efforts are. Careful vigilance, caution, and concerted effort are absolutely necessary, especially to counter desensitization to the dangers involved, and there is always room for improvement.

Tatsuta’s own personal experiences while working in Fukushima are what inform Ichi-F. As such, it cannot provide a comprehensive look at the disaster and recovery efforts as a whole, but it does offer an individual perspective critical to the larger context. Tatsuta is an insider telling a story that’s often left untold because it isn’t particularly dramatic or exciting–the manga is a thorough, informative account of the work being done to decommission the Fukushima Daiichi Nuclear Power Plant. The manga can be a bit text-heavy at times, and the way that it has been modified to read left-to-right occasionally interrupts the narrative’s visual flow, but the memoir is both fascinating and accessible. Ichi-F is also the story of the people involved in the cleanup and the close relationships that Tatsuta develops while in Fukushima. What in many ways started out as just a job ends with Tatsuta caring deeply about and for his colleagues at the plant, the locals and residents of Fukushima, and the area itself. While the lasting effects of the nuclear disaster in Fukushima are tragic and some areas remain incredibly hazardous, conditions are slowly improving and recovery and revitalization is happening partly thanks to the efforts of Tatsuta and the other workers shown in Ichi-F.