I’ve never used the word “shambolic” in a review before, but that was the first adjective that came to mind as I read Go With the Clouds: North by Northwest, a handsomely illustrated series that can’t decide if it’s a murder mystery, a coming-of-age story, an Icelandic travel brochure, or a Knight Rider episode. Go With the Clouds’ abrupt tonal shifts and plot twists left me scratching my head, but I was never bored or disappointed by Aki Irie’s narrative choices; if anything, the messy weirdness of the first volume was ingratiating, a reminder that sometimes the most interesting storytellers aren’t particularly disciplined.

The first volume is a bumpy ride, lurching from one idea to the next without warning. In the first five chapters alone, we learn that seventeen-year-old protagonist Kei Miyama is a detective-for-hire; has a younger sibling named Michitaka who’s the chief suspect in a double homicide; and can hear his car’s thoughts. (As befits a story set in Iceland, Kei’s car is very moody.) Though volume one ends with a dramatic confrontation over Michitaka, volume two barely acknowledges the murder investigation, focusing instead on a visit from Kei’s childhood friend Kiyoshi. The two spend an agreeable week touring the Icelandic countryside by car, visiting geysers, gawking at cliffs and waterfalls, and taking pictures. Michitaka makes the briefest of cameos, but is otherwise absent from volume two—a strange choice, given how urgent his storyline seemed in volume one.

Normally, this kind of narrative sloppiness if a turn-off for me, but Irie rewards the patient reader with complex characters, interesting bits of Icelandic lore, and—best of all—breathtaking artwork that captures the starkly beautiful landscape of the Golden Circle. Her linework is crisp and her use of tone sparing; in her most striking panels, we have a sense of how empty the Icelandic countryside really is thanks to her judicious use of white space. At the same time, however, she excels at detail work, giving the reader an intimate look at houses, cafes, churches, and—yes—car interiors. That same attention to detail extends to her character designs, which are an elegant blend of naturalism and stylization; you’d be forgiven for thinking that Kei looks more like a movie star than a moody teenager. 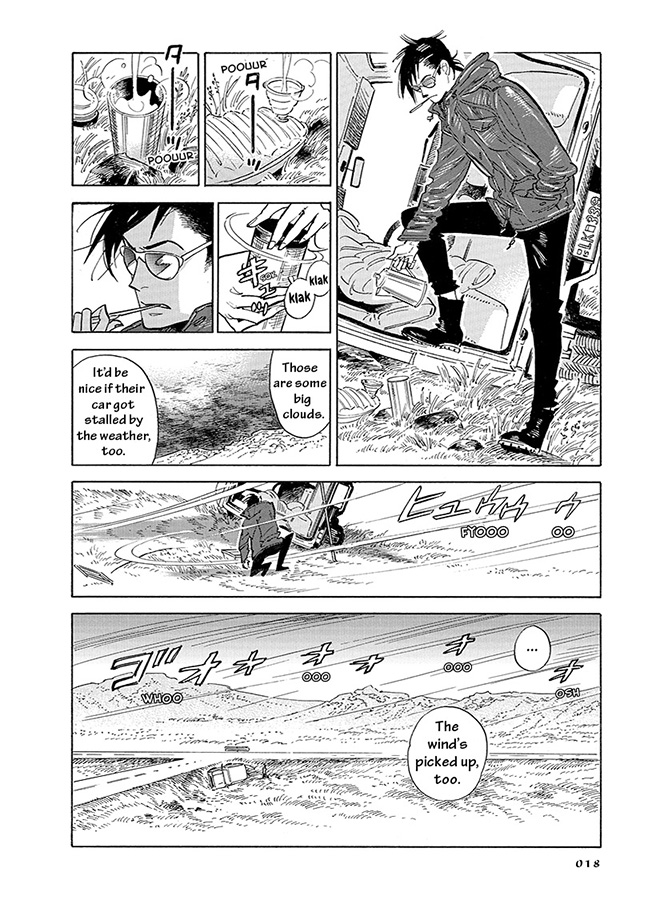 Her characterizations are likewise thoughtful. Kei, for example, isn’t defined solely by his gift; instead, it’s just a small facet of his personality that helps shed light on how attuned he is to his surroundings. The same is true for Kei’s grandfather, who’s initially portrayed as a stubborn curmudgeon but turns out to be more perceptive than his blustery persona might suggest, especially after Michitaka enters the picture. While several seemingly important characters are still in an embryonic stage of development—most notably Kei’s imperious neighbor Lilja—Irie’s ability to depict people in all their idiosyncrasies makes me confident that the supporting cast will be more fleshed out in future volumes.

I’d be the first to admit that the series’ pacing and narrative detours won’t be everyone’s cup of tea; I was initially put off by Kei’s one-sided conversations with his trusty jalopy, and frustrated by the sudden appearance—and equally sudden disappearance—of a Japanese investigator who is convinced of Michitaka’s guilt. By the end of volume one, however, I didn’t care; I felt that Go With the Clouds had transported me somewhere I hadn’t been before—in real life or my imagination—and was eager for another installment of Kei’s saga. Recommended.

GO WITH THE CLOUDS, NORTH BY NORTHWEST, VOLS. 1-2 • ART AND STORY BY AKI IRIE • VERTICAL COMICS • NO RATING