It has been years since Shuji has been in a serious relationship. Although he’s still on good terms with his ex-wife, his marriage was a failure and he hasn’t done much more than casually play around since the divorce. But now, somewhat unexpectedly, Shuji finds himself in what may very well become something more long-term, and with another man no less. The relationship between Shuji and the young doctor Saji has had a few bumps along the way, and both of the men still occasionally feel insecure, but for the most part they’ve been able to move past the major drama. That doesn’t mean everything has been completely worked out, though. As grown adults, Shuji and Saji each have their own family responsibilities and careers to take into consideration. Shuji has his daughter Chii to look after and the business at his candy store isn’t as good as it once was while Saji is having a difficult time convincing his grandfather to allow him to take over the family’s local clinic. So, there are still a few matters that Shuji and Saji will need to address before their relationship can go much further. 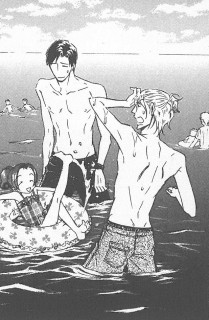 Although Hide and Seek tends to be more serious, mature, and realistic, especially when compared to its immediate predecessor Bond of Dreams, Bond of Love, at the same time there is still plenty of humor and lightheartedness to the series. For example, the major dilemma in the first chapter of Hide and Seek, Volume 3 revolves around Shuji “manning up” in order to cuddle, with delightful results. Shuji’s love of costume and roleplay comes up again, too, which has been something of a running joke in both Bond of Dreams, Bond of Love and Hide and Seek. I’ve really enjoyed seeing the relationship between Shuji and Saji develop as the series has progressed; they’re adorable and surprisingly sweet together, even considering (or perhaps even because of) their drastically different personalities. It’s obvious that they each care tremendously for other person. What makes their relationship work, and one of the things that I particularly love about Hide and Seek, is their willingness to push through their initial fear and embarrassment over expressing themselves and actually communicate with each other.

Seeing as I had enjoyed Sakuragi’s earlier works, I was fairly confident that I would like Hide and Seek, too. What I didn’t anticipate was just how much the series would end up appealing to me; I think it may now even be my favorite Sakuragi manga. I find this to be a little surprising because, although Saji is a type of character that I’m usually fond of, in general Shuji wasn’t. But over the course of Hide and Seek I came to really like and care about him. He has evolved from simply being supporting comic relief in Bond of Dreams, Bond of Love into a fully fledged, well-developed character in his own right. Much of Hide and Seek, Volume 3 is devoted to his family circumstances, which are revealed to be a little different than readers (and Saji, for that matter) were initially led to believe. Chii’s mother and her current boyfriend play a greater role, but the series implies and is open-ended enough that there is room for Saji, Shuji, and Chii to form a trio as well. Perhaps it’s optimism and wishful thinking on my part, but it makes me extremely happy that by the end of Hide and Seek, Chii may very well have gained two caring families.

Hide and Seek is a three-volume boys’ love manga series by Yaya Sakuragi. The manga is a direct spinoff of another of Sakuragi’s boys’ love series, Bond of Dreams, Bond of Love, which is itself tangentially related to her series Tea for Two. All three series can be read and enjoyed separately from one another, but there are some shared characters and references. Both Bond of Dreams, Bond of Love and Hide and Seek were licensed and released in English by Sublime Manga, the boys’ love imprint associated with Viz Media. (Tea for Two was published by Tokyopop’s Blu Manga imprint back in the day.) Hide and Seek, Volume 2 was originally released in Japan in 2013 while the English-language edition was released in 2014. I began following Sakuragi’s work in translation after encountering her boys’ love one-shot Hey, Sensei?. I’ve continued to enjoy and read her manga, but I find Hide and Seek to be particularly good.

It was supposed to be a simple fling, an uncomplicated relationship to enjoyably pass the time with no expectations that it would develop into something more serious. Except that Shuji, who generally isn’t interested in other men, is falling more and more for the young neighborhood doctor Saji. Though he’s slow to admit that he’s in love, Shuji can’t deny the jealously he experiences when he sees another man kiss Saji. Those feelings intensify when he discovers that the man, Yuki, used to date Saji and due to various unfortunate circumstances is currently staying at the doctors’ home. Saji picks up on some of that jealousy, but he has already resigned himself to a fleeting relationship with Shuji. He would certainly be interested in a more devoted partnership, but he’s been burned so many times in the past that he’s trying no to get his hopes up. And with neither man being completely honest with the other about his feelings, any sort of relationship will be difficult to maintain. 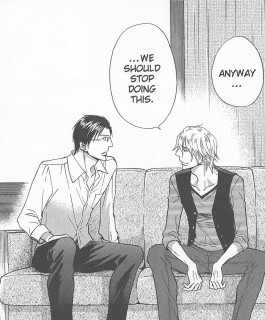 While Hide and Seek definitely has its humorous moments, overall it tends to be a much more serious, and to some extent much more realistic, manga than its immediate predecessor Bond of Dreams, Bond of Love ever was. Likewise, Shuji, the main connecting character between the two series, is significantly more developed and complex in Hide and Seek. Although at heart he hasn’t really changed much from who he was in Bond of Dreams, Bond of Love, in part due to the tone of Hide and Seek his character has now become convincingly believable instead of being intentionally comedic and shallow. Shuji amused me greatly in Bond of Dreams, Bond of Love, but I really like Hide and Seek‘s more nuanced version of him. He is much more considerate and much less self-centered than his outward demeanor would initially lead one to assume (as well a more responsible and mature), and he’s honestly concerned for the well-being of those he cares most about, including Saji.

Overall, the characterization in Hide and Seek is excellent, particularly that of Shuji, but Saji is also a realistically complicated individual. I’ve enjoyed watching their relationship evolve and develop over the course of Hide and Seek and look forward to seeing how things turn out for them in the final volume. Shuji and Saji’s relationship isn’t in danger because they’re incompatible. In fact, the two men are surprisingly well-suited for each other. It’s actually because they care so much for each other and are trying not to force their feelings on, take advantage of, or hurt the other person that their relationship has the potential to dissolve. Although they do misinterpret the meaning and motivations behind some of each others’ words and actions, and make some inaccurate assumptions as a result, Shuji and Saji do communicate with each other, something that is absolutely critical for any relationship to succeed. Granted, they still need to learn to open up to each other a little more if they’re going to make things work in the long-term.

Shuji Tanihara is single, divorced, and currently the parent who is primarily responsible for taking care of Chii, his young daughter. Granted, sometimes it seems as though she is really the one taking care of him. Between Chii, tending the small candy store he owns, and the occasional drink with friends, Shuji doesn’t have much else going on in his life. He’s happy, but also a little bored. But that changes when his shop unexpectedly gains a new customer—Saji, a young, successful doctor whose serious and reserved personality is the complete opposite of Shuji’s relaxed, easy-going attitude. Saji is gay and Shuji, while not usually attracted to other men, has developed an interest in him as well. Though in the past he was a notorious heartbreaker, it’s been a while since Shuji has dated anyone. He intends to enjoy his fling with Saji, but what he didn’t anticipate was actually falling for the guy. 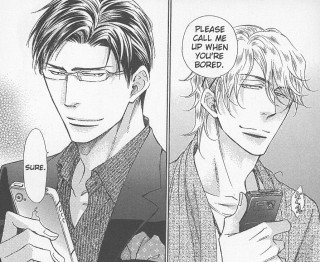 Hide and Seek may very well be one of Sakuragi’s strongest manga yet. And, if the first volume is anything to judge by, it’s also one of her works with the most sexual content. What is perhaps most thrilling about that is the sex in Hide and Seek is completely consensual between two mature, adult men. There are absolutely no dubious connotations, means, or coercion involved. (Sadly, all of this seems to be somewhat rare in boys’ love manga.) Both Shuji and Saji know what they want in bed and they actually communicate, going on to enjoy themselves without shame; Shuji is sexually adventurous and Saji, it turns out, is an especially skilled, experienced, and considerate lover. Though they have their differences, the two men enter into their relationship as equals. Most importantly, they respect each other, which is wonderful to see. Their interactions both inside the bedroom and outside of it reveal a lot about them as individuals.

The sex in Hide and Seek is great (Shuji and Saji would be the first to admit this), but the series’ drama and heart is found elsewhere. While there is still plenty of humor and lightheartedness to be seen in the first volume, Hide and Seek is one of Sakuragi’s more serious manga, especially when compared to its immediate predecessor Bond of Dreams, Bond of Love. Shuji in particular comes across as a slightly more responsible adult than he did in that earlier series, although he is still very carefree and gets a kick out of provoking people to get a reaction out of them. His personality both conflicts with and complements Saji’s. This becomes the basis of much of the series’ humor. It’s also the source of the manga’s drama. Saji, despite his kindness and thoughtful nature, can be socially awkward and has been rejected many times before by other flighty partners reluctant to take a relationship too seriously. Shuji and Saji are a mismatch but seem perfect for each other. I’m anxious to see how their relationship continues to develop.