Although Ellery Prime has been writing for years, Gauntlet, illustrated by the talented T2A, is her first original novel to have been published. Gauntlet is also the first novel to have both started and finished in Chromatic Press’ multi-media online magazine Sparkler Monthly before being released in print. Gauntlet began serialization in the very first issue of Sparkler Monthly in 2013 and was completed in 2014, after which it was revised and complied into a single volume. The finalized version of Gauntlet also includes additional material not found elsewhere: “Square One,” a short prequel to the main story, as well as a few amusing yonkoma-style bonus comics. Gauntlet has been very accurately described as a “survival horror romance novel” by the publisher. I’m actually kind of glad that I waited to read Gauntlet until it had been finished; the number of twists and cliffhangers would have made the wait between chapters torturous.

Twenty-two-year-old Clio has recently moved to the big city. Embarking on her new life as a responsible, independent adult, Clio is largely enjoying living on her own. After three months she has grown more and more comfortable as a resident of the city and with finding her way around its streets and alleyways, but that all changes when she makes a wrong turn and puts her trust into the wrong people. Suddenly Clio finds herself a reluctant participant in a game of survival, trapped inside the Gauntlet–an incredible and expansive system of interconnected buildings at the heart of the city. Clio doesn’t even know the rules she should be following, nor does she know who is responsible for the game or why she was chosen as a participant. Each person she encounters in the Gauntlet has their own reasons for being there, and many are playing by their own rules. Clio may be in even more danger than she realizes. The other players she meets are just as likely to manipulate or betray her as they are to help her. 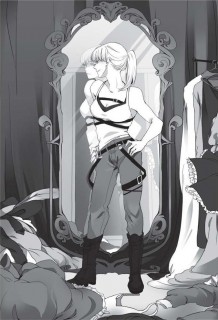 One of the things that makes Gauntlet particularly engaging and enthralling is its setting–the Gauntlet itself. The complex is logic-defying, a constantly changing labyrinth that presents very real survival concerns: finding food, clean water, and safe places to hide and rest, not to mention avoiding capture and falling into the hands or under the influence of people who, intentionally or not, mean harm. But the Gauntlet is also insidiously seductive. At first Clio desperately wants to find a way out and to escape, but there’s an underlying fear that she will lose her will to do so. Some people, perhaps most, never leave the Gauntlet after entering it even if they survive. Clio discovers many who are mindlessly shuffling through its halls and corridors as well as participants who have simply give up, content to be controlled by others. But most dangerous and terrifying are those people who have made deliberate, conscious decisions to remain within the Gauntlet’s depths.

The characters in Gauntlet are just as intriguing and complex as the novel’s setting. In the beginning Clio isn’t nearly as independent as she believes herself to be. Very early on she attaches herself to Britt, another young woman in the Gauntlet, which will have significant ramifications later on. Again and again Clio comes to rely on others and again and again she is taken advantage of by those very same people, all of whom have their own motivations and desires. But she grows and becomes stronger, impressively so. In some ways, Gauntlet feels like a dark homage to Lewis Carroll’s Wonderland–the Gauntlet and the people within it operate by their own logic with surprising, unexpected, and sometimes curious and peculiar results–and there are frequent nods to other stories and fairy tales as well. After finishing the novel, not only did I want more of Gauntlet, I also wanted to immediately read it again to see how all of its individual pieces fit together from the beginning. That, to me, is a sign of a great piece of fiction.