I was very excited when Kodansha Comics announced that it would be releasing Die Wergelder in English. At the time, I actually didn’t know much about the manga series beyond the fact that it was created by Hiroaki Samura, but that was more than enough to capture my attention—Samura’s long-running, award-winning series Blade of the Immortal was one of the first manga that I ever read and it remains a personal favorite. I’ve also throughly enjoyed Samura’s two short manga collections that have been translated, Ohikkoshi and Emerald and Other Stories. As Blade of the Immortal was drawing to a close in Japan, Die Wergelder was just beginning, the first volume being published in 2013. The second volume was released two years later in Japan in 2015. The first installment of Kodansha’s English-language edition of Die Wergelder, also published in 2015, collects both of those volumes.

Shinobu has made a mistake that may very well cost her life. After attempting to run way with a low-ranking yakuza member, along with a rather large sum of his syndicate’s money, the two of them are caught and Ro’s boss isn’t particularly happy with them. Normally Shinbou would likely have been killed without a second thought, but her background happens to make her uniquely qualified for a job that Ro’s boss needs done. She’s more or less forced into accepting and so suddenly finds herself embroiled in the schemes and rivalries of multiple groups. The world of organized crime is fraught with danger and made even more so with the appearance of Träne, an assassin hellbent on revenge against those who have done her tremendous wrong. And then there’s Jie Mao, an opposing bodyguard whose deadly combat skills make her a formidable foe. Shinobu does have the guts and brash attituded needed to survive, but that’s also a large part of why she’s in such trouble to being with. 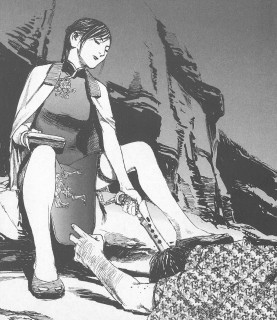 Die Wergelder is heavily inspired by or at least influenced by 1970s Japanese pink films—theatrical releases steeped with eroticism, nudity, and sex. More specifically, Samura is taking cues from Toei’s Pinky Violence series of films. (Träne’s dark long coat, wide-brimmed hat, and tale of vengeance would appear to be a direct reference to the Female Convict Scorpion films in particular.) Likewise, Die Wergelder contains fairly extreme content, including gratuitous sex and explicit violence. Women and men, although to a somewhat lesser extent, are brutalized and degraded both sexually and physically throughout the story. Die Wergleder is true to its lurid and exploitative roots and the series seems to be self-aware of that. With an additional heavy dose of sadism, it’s certainly not a manga to be lightly recommended to just anyone, though what it does it does well.

By far the most interesting and compelling characters in Die Wergelder are the women. They are easily the most sexualized and objectified as well, but they’re also powerful and terrifying forces to be reckoned with. In comparison, the men of Die Wergelder aren’t particularly memorable, even when they are impressively powerful their own right. Träne and Jie Mao are stunning to watch as they fight. As I’ve come to expect, Samura’s action sequences are dramatic and dynamic. The martial skills shown may frequently be unbelievable, but they are devastatingly effective. With all its brutality and torture, Die Wergelder can be exceptionally violent and gruesome even while being beautifully drawn. It’s a deliberately uncomfortable series, Samura pushing the boundaries of acceptability. Rape, murder, abuse, and unethical medical experimentation are all regular occurrences, and that’s just scraping the surface of the despicable, thrilling, disturbing, titillating, and vicious world that Samura explores in Die Wergelder.