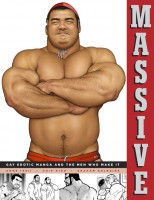 The volume’s table of contents is formed by a gallery of photographs paired with full-page color pin-ups illustrated by each of the contributors to Massive: Gengoroh Tagame, Inu Yoshi, Kumada Poohsuke, Takeshi Matsu, Jiraiya, Gai Mizuki, Fumi Miyabi, Seizoh Ebisubashi, and Kazuhide Ichikawa. This is followed by introductory essays written by each of the three editors. Kidd’s “It Feels Too Good” conveys the excitement over the fact that a volume like Massive even exists, while Ishii reveals some of the steps it took to publish the material in “Seeking English Translator.” Kolbeins essay “Glocalizing Gei Manga” is particularly enlightening, providing a greater context for Massive and a brief overview of the history of gay manga and how the volume fits into it. Also included is a timeline of male-male sexuality in Japanese culture, a list of recommended readings, and numerous photographs and illustrations. However, the real meat of the collection is the individual profiles of each of the creators introducing their work and personal histories and exploring their careers and the impacts they have made on the genre of gay erotic manga. The other major highlight of Massive is the inclusion of examples of their manga.

For most of the contributors, Massive marks their debut in English. Excluding Tagame, who has thus far had four collections published, Matsu is the only creator to have had a major release in English. And except for Jiraiya’s “Caveman Guu,” which was previously printed separately, all of the manga collected in Massive is being translated into English for the first time. Some are excerpts of longer works, like Tagame’s Do You Remember South Island P.O.W. Camp? and Poohsuke’s Dreams of the New Century Theatre, while others are shorter, standalone stories. There is humor and playfulness to be found in Yoshi’s “Kandagawa-Kun” and Matsu’s “Kannai’s Dilemma,” more dubious encounters in Mizuki’s “Fantasy and Jump Rope,” Ebisubashi’s “Mr. Tokugawa,” and Ichikawa’s “Yakuza Godfathers”, and even mythological inspiration in Miyabe’s “Tengudake.” The manga collected in Massive is most definitely erotic in nature. Some of the selections are simply suggestive, but many feature explicit, uncensored, and uninhibited sex between hypermasculine, muscular, and otherwise large-bodied men. It is called Massive for a reason, after all.