Given the current economic climate, any book with the subtitle The Last Career Guide You’ll Ever Need sounds like a worthwhile investment. Job seekers should be warned, however, that The Adventures of Johnny Bunko isn’t about crafting the perfect resume, networking, or nailing the interview, but finding a career path that suits your strengths and personal values. Readers should also note that Johnny Bunko’s format defies easy categorization, straddling the fence between graphic novel and self-help book. Some readers may find Johnny Bunko’s mixture of slapstick humor and advice charming, while others may find the presentation too gimmicky for their tastes.

The story follows Johnny, a recent college graduate toiling in anonymity at a large company. Thanks to a set of magical chopsticks, he acquires an unorthodox career counselor who talks like a drill sargeant but dresses like a genie. Johnny hopes that Diana will give him insider tips for getting ahead, but instead she offers six, Yoda-esque rules that run the gamut from “There is no plan” (meaning that it’s impossible to map out your entire career) to “Persistence trumps talent” (meaning that a strong work ethic is a better predictor of success than intelligence or talent). Each chapter addresses one of these six rules, showing us how Johnny’s mistakes prevent him from being successful in the workplace by playing it safe, working a job that taxes his weaker skills, and bypassing his supervisor to pitch an idea to the head honcho.

Daniel Pink’s advice may seem glib to recent college graduates without jobs. After all, Johnny is employed; he just doesn’t like what he’s doing. Folks in their mid-to-late twenties are a better audience for Johnny Bunko, as they’re more likely to be questioning their career path—should I go back to school for a graduate degree? why didn’t I get the promotion I deserve?—than those struggling to find an entry-level position. 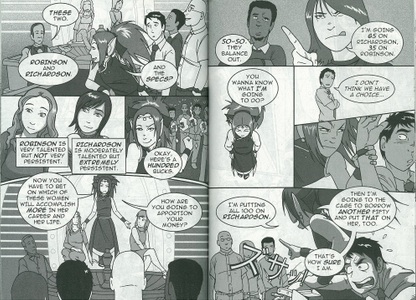 Whether twenty-something readers will warm to the presentation, however, is another question. Artist Robert Ten Pas, winner of Tokyopop’s Rising Stars of Manga contest, employs a style that blends Eastern and Western influences. This synthetic approach doesn’t quite work, producing a jumbled, dark layout that’s overly toned, a flaw compounded by the thin, greyish paperstock. Pas’ character designs are also problematic: though he draws realistic, animated faces, his characters’ bodies often look stiff, like dolls whose limbs have been bent into slightly unnatural positions.

If The Adventures of Johnny Bunko carried a lower price tag—say, $7.99—I wouldn’t hesitate to recommend it, as Daniel Pink offers the kind of sensible advice that most of us never got from parents, college career counselors, or co-workers. At $15.00, however, Johnny Bunko seems overpriced, both for the paucity of content and the poor production values. Self-help books don’t need to be long to be useful, of course, but when the book’s main talking points could be reduced to a good blog post, budget-conscious readers may prefer to obtain their copy through a used bookstore or library, as I did.