By Kaoru Mori. Released in Japan by Enterbrain, serialized in various magazines. Released in North America by Yen Press.

Well this is a bit of an odd duck, isn’t it? Half story collection, half sketchbook, it’s no surprise that this is being released in more expensive hardcover, as I doubt it would recoup any costs whatsoever otherwise. But then that’s also true of A Bride’s Story as well (and note Emma and Shirley were “blogger favorites” with crappy sales). Kaoru Mori is not the author of a Bleach or Naruto, and has a very enthusiastic but minimal audience. As such, this may almost be review proof – anyone buying this is getting it because it’s something new by the author, and the content is mostly irrelevant. That said, there is a lot to like here, even as there’s also a lot that left me scratching my head or feeling vaguely unsatisfied. Which is about what you’d expect from a collection like this. 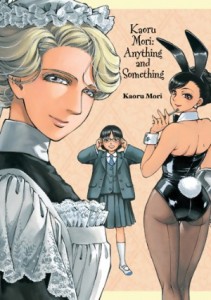 One thing that pleased me greatly was the sense of humor of many of these stories. Indeed, they’re not simply funny but eccentric – always one of my favorites. The first story in the collection shows a butler and maid desperate for a master so that they can continue to live as they are accustomed – and it’s clear who’s going to be in charge. Then there’s the very early story involving a perverted loon of an inventor and his implacable battle maid. It was impossible for me not to think of the inventor as being played by Michael Bentine (google it). And the cute yet slight story of a girl who takes forever to grow into her school uniform just brings a smile to the face. Some girls are born to attract attention no matter how they look.

There’s also quite a bit of cheesecake here, as if the cover art didn’t clue you in. A Bride’s Story and Emma don’t exactly give a lot of opportunities to draw the female form (except covered in gorgeous clothing). Also, Mori writes mainly for Fellows!, an Enterbrain seinen magazine whose content is geared towards older men who like to see something sexy. This explains the almost static chapters with the Host Club bunny and the wife trying on her swimsuit, which are almost there for art alone. Indeed, one very short story about a girl who is bird-watching essentially stars her posterior.

There were one or two stories that reminded me of my frustration with Mori’s implacable females, particularly one involving a young master wanting to no longer be treated like a child and his maid who smiles politely no matter what. I admit it’s what she does best, but I was hoping for a bit more wackiness. Ironically, the longest story of the collection (and one of my favorites) wasn’t written by Mori, but by fellow Fellows! writer Satoshi Fukushima (who writes Kidou Ryodan Hachifukujin, which would be an awesome if unsellable license). This also features a seemingly implacable girl, but mostly focuses on the ‘normal’ girl who becomes her friend. There were a lot of subtleties here regarding art and life, and I worried that the story was going to end far more tragically, so was pleased at its more ambiguous climax.

After that, there’s the 2nd half of the book. I have far less to say about it – it’s a sketchbook, basically – and if you like Emma or A Bride’s Story, or simply reading about things like fireplaces, then you should find it satisfying. I do wish it had been interspersed with the short stories – having it all come in the 2nd half ends up making the whole book feel like a bit of a curate’s egg (google that too). There’s some good stuff here, but as a collection it’s more ‘odd’ than ‘satisfying’. Which is appropriate, as that’s how I’ve come to view Mori’s work as a whole.

Welcome back to our new video feature, My Week in Manga! In this week’s episode, I talk about what I’ve read this week and what I’ll be reading before the week is out, including a short review of Ryo Hanada’s Good-Bye Geist, from GEN Manga.

Click here for information on the upcoming holiday book club!

Manga this week:
Kaoru Mori: Anything and Something (Yen Press)
Good-Bye Geist (GEN Manga)
Pride, Vols. 3-4 (JManga)
The Devil Is So Cute (JManga)
The Betrayal Knows My Name (Yen Press)