So far, three of Aki’s manga have been released in English. First was her debut, Utahime, published by Digital Manga. Second was her short series Olympos, released by Yen Press as a single omnibus volume. Most recently published in English is Aki’s The Angel of Elhamburg, initially conceived of as a short, one-shot manga, but expanded to fill an entire volume. Also released by Yen Press, The Angel of Elhamburg is presented in an attractive hardcover edition with a dust jacket with foil accents. The manga was released in Japan in 2013 and in English in 2015. Aki’s manga tend to be historical fantasies with prominent European influences and a fair amount of melancholy and sadness. The Angel of Elhamburg falls into that category as well. Although I sometimes find aspects of Aki’s storytelling frustrating, I largely enjoy her manga and her artwork is consistently beautiful. I was very happy to see The Angel of Elhamburg licensed.

After successfully overthrowing the previous lord, Madeth has become the High King, something that would not have been possible had it not been for the support and efforts of his close friend and knight Lalvan. Madeth has extraordinary charisma—people easily love and willingly follow him—but he is uneducated and of low birth. He lacks the ambition and confidence that one would expect from a ruler. Lalvan, on the other hand, is exceptionally clever and capable. But despite his talents, and his peculiar ability to see spirits invisible to others, Lalvan has always been overshadowed by his friend and most often finds himself in an auxiliary role. Now that Madeth has become king, their relationship has started to fracture as long-hidden and suppressed insecurities, jealousies, and issues of trust threaten to destroy their friendship and perhaps even throw the kingdom into turmoil once more. 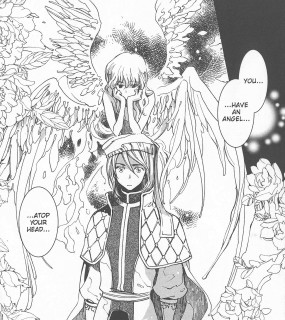 Although the title is The Angel of Elhamburg, the role of the angel in the manga—a spirit that watches over Elhamburg Castle, the kingdom’s seat of power—is actually a relatively minor one. The fact that Lalvan can see the angel significantly impacts some of the story and character developments, but the angel itself is not an active character, merely a notable presence. The real focus of The Angel of Elhamburg is on the changing relationship between Lalvan and Madeth, with a particular emphasis given to Lalvan and his perspective of events. This highlighting of the characters is present in Aki’s storytelling as well as in her artwork. Although overall quite lovely, the backgrounds and settings tend to be somewhat limited; more attention is devoted to the characters’ facial expressions and body language, and to the details of their clothing and design. Because the manga’s focus is so much on people as individuals, The Angel of Elhamburg often feels very intimate and personal.

The Angel of Elhamburg is told in five scenes, or chapters. I particularly liked the structure of the first which is further divided into three acts following Lalvan, Madeth, and the angel respectively. However, once Aki decided to expand the manga, the narrative deviates from this initial structure and becomes more linear until the last scene. The final chapter is a little confusing at first since its use of flashbacks and flash-forwards obscures the story’s chronology. The Angel of Elhamburg is a bittersweet tragedy. With the manga’s classical feel and theatric nature, I could easily see it being adapted as a stage production. The rise and fall of a kingdom serves as the backdrop for the interpersonal drama and conflict, which is the true heart of the manga. There is a story, but The Angel of Elhamburg is probably best described as a character study. The Angel of Elhamburg excels in conveying the depth of Lalvan and Madeth’s individual personalities and fears, ultimately showing an established and evolving relationship that is believably complicated. 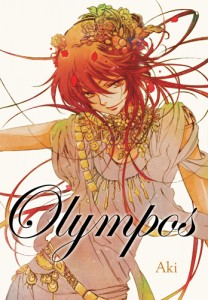 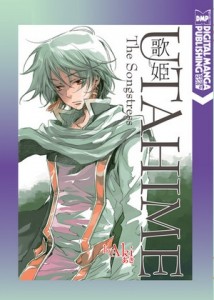