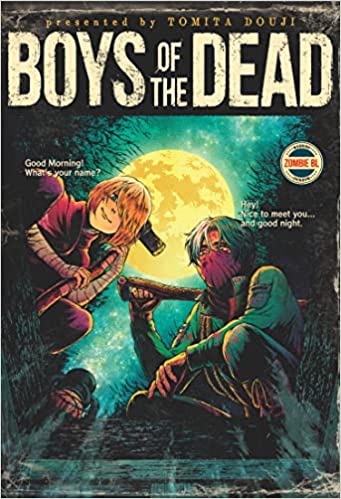 SEAN: I’ve always regarded Sacrificial Princess and the King of Beasts, aka Fruits Basket for fantasy readers, so I’m going to make its final volume my pick. If you don’t mind “pure-hearted girl fixes everyone around her by virtue of being really swell”, this is a great one.

MICHELLE: I am curious about a few of this week’s debut series, but I’m not confident enough in any of them to fully endorse them as a pick this week. Thus, I’ll be safe and go with Cherry Magic!, since I know I really liked its first volume.

KATE: I was tempted to pick Boys of the Dead–who doesn’t love ZOM-BL?–but I have a feeling the marketing of this title is more clever than the actual manga, so my vote goes to A Galaxy Next Door. I adored Sweetness and Lightning, so I’m board with whatever food-flavored drama Gido Amagakure is dishing out this time around. (Sorry–couldn’t result a terrible pun or three of my own.)

ASH: Quite a few interesting debuts being released this week! Like Michelle, I’m not sure how some of them will actually play out, but I am intrigued. Two I’m particularly curious about simply because of their creators–A Galaxy Next Door and Blackguard (Ryo Hanada’s evolution as a creator since Good-bye Geist has been interesting to see). However, my pick this week goes to Sensei’s Pious Lie a series that was first brought to my attention a few years ago by Jocelyne Allen’s review.

ANNA: There’s honestly not a ton coming out this week that really appeals to me, so because I sometimes like chaos, I’m going to go with Boys of the Dead just because it sounds plenty wacky.