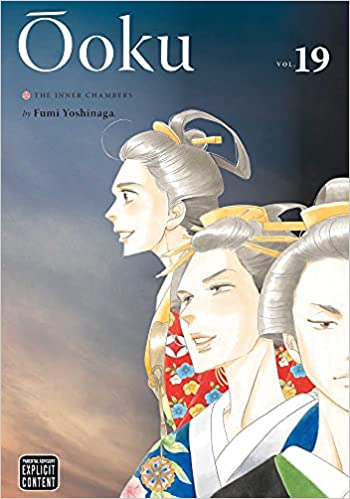 SEAN: We have a wealth of choices this week. I could pick the much requested Chitose Is in the Ramune Bottle, as the resident light novel person. There’s My Wandering Warrior Existence, the latest from Nagata Kabi. But I think I’ll pick something away from my tastes with Orochi: The Perfect Edition, which is from 1969 (a rarity in licenses these days) and was licensed pre-,manga boom and dropped, but is now being released again (also a rarity). It looks scary as hell.

MICHELLE: I’m taking my final chance to pick Fumi Yoshinaga’s epic Ōoku: The Inner Chambers. Though it’s been repeatedly heartbreaking to fall in love with various characters along the way, only to have them meet their cruel fate one way or another, it’s also been wholly fascinating and I look forward to seeing how she wraps it all up.

KATE: Gotta go with Sean on this one: classic horror FTW!

ANNA: Since this is my last opportunity to pick Ōoku: The Inner Chambers. I’m going to join with Michelle for her pick.

ASH: Echoing everyone else here, but I have to join in with giving Ōoku: The Inner Chambers a shout out for its final volume and a cheer for the debut of Orochi.