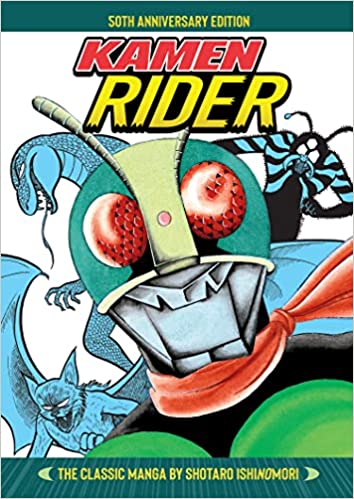 KATE: One of the things I appreciate about Seven Seas is how much they’ve diversified their catalog. Yes, they still publish things like Trapped In Another Dimension with a Ridiculously Hot Girl: Have You Seen My Three-Hit Attacks?, but they’ve also made a commitment to publishing older series, offering North American readers an opportunity to read foundational texts such as Claudine, Cutie Honey, Captain Harlock, and Devilman. I’m excited to see what they’ve done with Shotaro Ishinomori’s Kamen Rider, which, as my colleague Sean pointed out, is “the inspiration for most anything you’ve ever loved.” Sold!

SEAN: Kamen Rider would absolutely be my pick if I had any confidence I’d finish it. Since I do not, I’ll go with something more in my wheelhouse: the first volume of Cross-Dressing Villainess Cecilia Sylvie. Combining villainess novels with Hana-Kimi seems like a great idea.

MICHELLE: I think it’s very cool that Kamen Rider is coming out and I will certainly give it a try. If I’m honest, though, my heart belongs to My Love Mix-Up!.

ANNA: I’m going to go with the final volume of Love Me, Love Me Not. Shojo Beat has really been bringing some great, heartfelt series recently and I’m looking forward to seeing how this wraps up.

ASH: It’s Kamen Rider for me this week! I’m very happy to see more of Shotaro Ishinomori’s work translated, and especially such an influential series. This omnibus is huge in more ways than one!