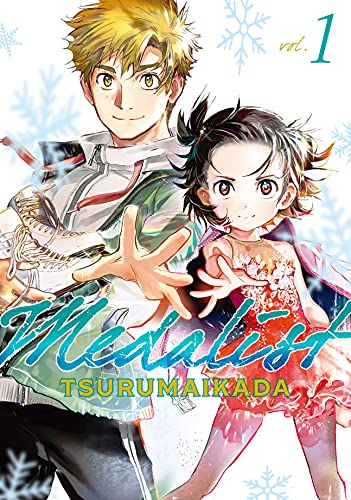 SEAN: It’s always hard to think back twelve months and remember what’s been coming out. There are so many titles that I love and want to mention here. In particular, there have been a lot of great LGBT series such as Boys Run the Riot and I Think Our Son Is Gay. There’s brilliant one-shot Look Back. I love light novels, so I want to mention Bofuri and Tearmoon Empire (it came out in print this year, so counts as a 2021 title) and any number of Villainess books. But I think I will make my pick a plucky digital-only title about an elementary schoolgirl who wants to be a figure skater but has a huge hill to climb. Between its story and its incredibly dynamic art, Medalist is one of the most captivating sports manga I;ve seen in years. I hope it gets a print release soon.

MICHELLE: It’s been a tough year for me in terms of marshaling the mental focus required to read. As a result, there are quite a few debuts I’ve been genuinely excited about that I haven’t yet managed to check out. One series that had sufficient pull on my heartstrings to compel me to finish it was Haikyu!!. I know it wasn’t a 2021 debut, but it did have a 2021 conclusion and I loved it very very much, so I’m going to pick it anyway! The final volume made me cry several times (in a good way). Hikaru no Go reigned for many years as my favorite sports manga ever, but with the perfect execution of its finale, Haikyu!! pulled ahead to claim the title.

ANNA: There’s a lot of manga to be thankful for. Some of my favorite series that come to mind immediately are Witch Hat Atelier, Yona of the Dawn, Given and A Sign of Affection. However, if I need to pick just one series to highlight, I’m going to choose the josei series Knight of the Ice because the combination of sports, romance, and Yayoi Ogawa’s unique sense of humor make every volume entertaining.

ASH: It’s been quite the year and I’ve not gotten in all of the reading that I would have liked, but there were still plenty of releases that I was thrilled to see. As already mentioned, there have been some really excellent LGBT manga coming out of late. We saw some holy grail re-licenses this year, too, like Fist of the North Star and No. 5. I’m also grateful for Drawn & Quarterly’s continued attention to the creators Shigeru Mizuki and Yoshiharu Tsuge. The other publisher that has most consistently captured my attention this past year has been Glacier Bay Books. One of it’s most recent releases, F by Imai Arata, is particularly impactful, but I love seeing the range of works being published by the press.

KATE: My pick of the year is Naoki Urasawa’s Asadora!, which follows the adventures of a plucky teen pilot who’s hot on the trail of a… well, I won’t spoil the surprise. Although it shares some thematic elements with 20th Century Boys and Mujirushi: The Sign of Dreams, Asadora! is more nimble and entertaining than either, thanks in no small part to the compelling relationship between the series’ two lead characters. Equally important, Urasawa’s illustrations feel a little more lifelike and animated than some of his recent efforts; he does a brilliant job of depicting the popular culture and urban landscapes of postwar Japan, as the country prepares for the 1964 Olympic Games. Volume five doesn’t arrive until April 2022, so there’s plenty of time to get caught up with this engrossing series.