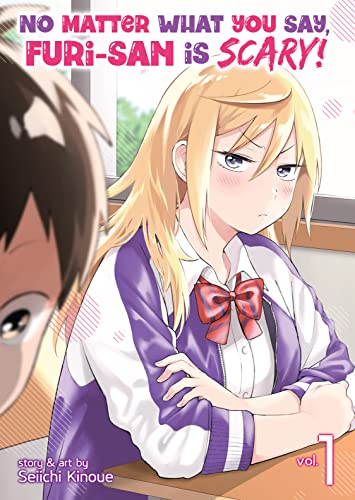 SEAN: A lot of Viz, as usual for the first week of the month, and my eye is drawn to the My Hero Academia: Ultra Analysis book, because I am a nerd. But I think I will go with No Matter What You Say, Furi-san Is Scary!, which is a genre (misunderstood girl everyone thinks is scary but isn’t) I really like.

MICHELLE: There’s not really one particular title screaming out to me this week. Moreso, it’s the prospect of catching up on some Shojo Beat series I’ve fallen woefully behind on. For the sake of choosing something, I’ll go with volume four of The King’s Beast. I really enjoyed Dawn of the Arcana and The Water Dragon’s Bride by this mangaka, and I have no doubt that trend will continue.

KATE: Not much caught my eye this week, so I’m going off-list to remind everyone that there’s a new installment of Evan Dorkin and Jill Thompson’s awesome Beasts of Burden series arriving in stores this week. If you ever thought that Stranger Things would be more entertaining if its protagonists were house pets, this is the series for you! It’s funny, unnerving, and proof that talking animals aren’t just for kids.

ASH: This week I’m going to join Sean in picking No Matter What You Say, Furi-san Is Scary! since it’s the debut that I’m most interested in. But as for ongoing manga, the new edition of Blade of the Immortal is probably the best way to experience the series.

ANNA: I’m with Michelle this week, I think The King’s Beast is the most intriguing thing coming out this week.

MELINDA: I’m not enormously drawn to anything this week, but if I must make a choice, I’ll go along with Sean and Ash. I think No Matter What You Say, Furi-san Is Scary! sounds potentially fun, and sometimes that’s enough!