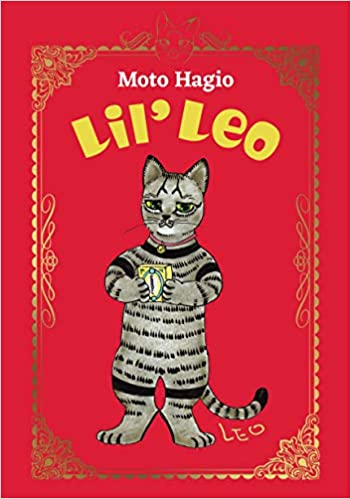 SEAN: Gee, what could it be? Moto Hagio? Cute smug-looking cats standing on their back paws? Sign me up for L’il Leo!

KATE: I’ve developed a reputation for being the most predictable member of the MB Battle Robot, and I won’t disappoint anyone by picking, say, The Hero Is Overpowered But Cautiously Optimistic or I’m Deeply Skeptical of the New Power I Just Manifested. OF COURSE Lil’ Leo is my first choice this week, for all the reasons Sean listed. But I’m also intrigued by Hello World, which is giving me serious orange vibes–and that’s never a bad thing.

MICHELLE: Any time there’s Moto Hagio, my pick is spoken for. That said, I am also looking forward to getting caught up on Ace of the Diamond and Giant Killing, both of which have new volumes out this week. The latter, being seinen sports manga about a professional team rather than high schoolers aiming for nationals, is particularly good.

ANNA: The idea of not picking Moto Hagio is inconceivable!

ASH: S’truth! If Moto Hagio is an option, that is the pick. And a cat manga, too? There really is no other choice. Lil’ Leo it is!

MELINDA: Moto Hagio and cats is an obvious and irresistible choice. My pick can only be Lil’ Leo!