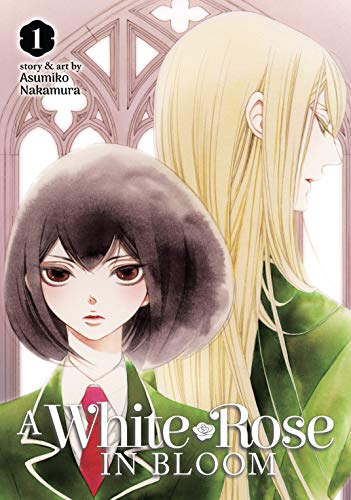 SEAN: It’s an embarrassment of riches the first week of 2021. There’s the new Ascendance of a Bookworm novel, the new Sweat and Soap, and any number of Viz titles. But the book I’m most interested in is A White Rose in Bloom. When Classmates came out I loved its tone, and I’m hoping that we’ll see the same attention to tone and character in this new series.

MICHELLE: I am very interested indeed in A White Rose in Bloom. Not just because of its pedigree, but because I’m a sucker for boarding school stories. However, I must admit that what most fills me with manga squee this week is the prospect of a mini-marathon to get caught back up with Haikyu!!. This will probably be the last catchup I do before I hoard the volumes leading up to the 45th and final one.

ANNA: There’s a ton of great manga coming out this week, but I’m going to pick Daytime Shooting Star, because that always seems to be on the top of my to-read pile whenever it comes out.

KATE: I never miss an opportunity to plug Drifting Dragons, which is one of the best-looking fantasy/adventure series on the market right now, but I’m also going to sneak in a recommendation Blue Period, an engaging drama about a high school student whose foray into painting leads him on an unexpected journey of self-discovery. Paging Bob Ross!

ASH: I’ve really been enjoying Drifting Dragons, too, but this week my eyes are on A White Rose in Bloom. The manga is good-looking and distinctive in an entirely different way and Asumiko Nakamura’s work is always a must-read for me.

MELINDA: I’m typically late with my picks each week, so Sean always has to nudge me for them. Then sometimes I’m still slow, so he’s always having to come up with some kind of clever line to get me off my butt. But his week was easy. He said, it “has a manga by the author of Doukyusei.” A White Rose in Bloom had me right there. That’s all there is to say.