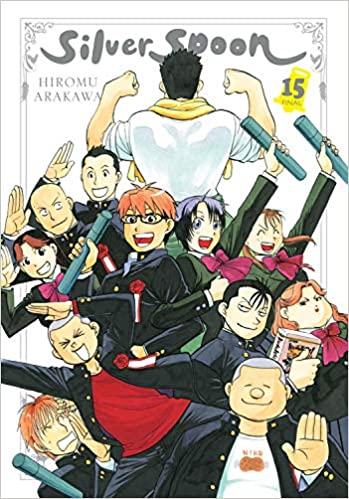 MELINDA: In a stunning turn of events, I’ll begin this week’s column. I have only one cry to let out into the world, and that would be… “SILVER SPOOOOOOOOOOOON.” What I’m saying is that my pick is Silver Spoon.

SEAN: Technically I know I should be picking the final Silver Spoon, or the new A Bride’s Story, or a new Baccano!, or any other number of Yen Press stuff. But after seeing Erica’s review of the first volume of I’m in Love with the Villainess!, that’s gone to the top of my “books I want to know more about”. Despite 2020 being the year of villainess stories, this is still apparently a cut above.

MICHELLE: For the longest time, I wasn’t especially tempted by light novels, but lately there have been a few to catch my eye. And after reading Erica’s review, I immediately went to Amazon and pre-ordered the digital edition of I’m in Love with the Villainess!. The prospect of genuine character growth and development within a fantasy isekai (plus yuri!) is really calling to me.

KATE: Oof–this is a lot to take in! I’m going to join Melinda in reminding everyone to buy the final volume of Silver Spoon, which has been a consistently great series from beginning to end, with vivid characters, real-life drama, and just enough poop jokes to prevent the whole thing from being too heavy, but I’m also going to shamelessly plug the newest installment of A Bride’s Story. Kaoru Mori costume drama = win.

ASH: As I anticipate being able to declare A Bride’s Story my pick in the future, and to grant that honor to I’m in Love with the Villainess! when it’s released in print (yes, I have it preordered), and that this is the last time I’ll be able to choose Silver Spoon, that’s the series I will go with this week! It’s such a great manga for all the reasons Kate has already described, plus it makes me oddly nostalgic for the area of the United States I grew up in. If you haven’t given Silver Spoon a try yet, this is the time.