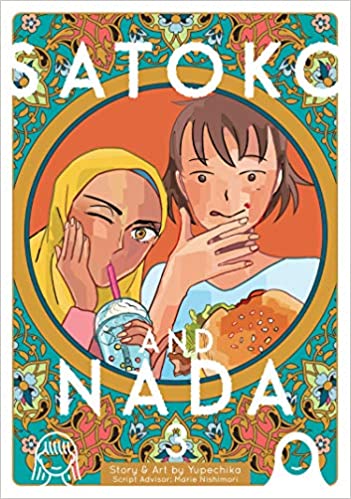 KATE: Holy smokes–that’s a lot of good manga heading our way this week! I’d be hard-pressed to limit my pick of the week to just two titles, let alone one. But if I had to choose just one book–and death was not an option–I’d pick Satoko and Nada, a sometimes gentle, sometimes sharp comedy about two international students making sense of the United States together.

SEAN: As I said in Manga the Week of, I love both Satoko and Nada and Tomo-chan Is a Girl. But if I’m going for a pick this week, I think I’ll go with – once again – Dead Dead Demon’s Dededede Destruction, Inio Asano’s K-On! gone horribly wrong series.

ASH: There really is an abundance of great manga being released this week! I’ll third the Satoko and Nada recommendation, but the manga I’m probably most looking forward to is Nagabe’s collection of short manga Love on the Other Side, so I’ll make that my official pick.

MICHELLE: I am going to pick still another option by going with the fifth and final volume of I’ll Win You Over, Sempai!. It’s a Kodansha digital exclusive and is about one of those pretty boys who’s actually kind of awkward but has been put on a pedestal and the pesky girl who does, indeed, eventually win him over. I have enjoyed it a lot.

ANNA: Out of everything coming out this week I’m most excited about Blue Flag 2, the first volume was wonderful.

MELINDA: Wow, the pressure is on! There’s a lot of exciting stuff to look forward to this week. And since my colleagues have already named most of them, I’ll put in a shout-out for The Weirn Books: Be Wary of the Silent Woods, which appears to be a continuation of her beloved (by me) Nightschool series for middle-grade readers. I’m excited to pick it up!