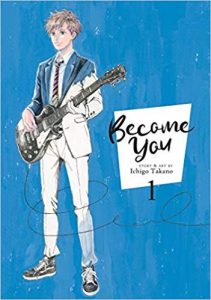 SEAN: It’s always tempting to pick Hayate the Combat Butler, if only to remind people it exists, and Become You looks promising. That said, the retro shoujo fan in me wants to read Queen Bee, the next-gen sequel to Love Attack!, which Tokyopop released back in 1839. I’ll pick that.

MICHELLE: I am very happy to see more Giant Killing at last, as its seinen take on sports manga is something different, but I am really looking forward to the debut of Become You. I loved orange very much and although Dreamin’ Sun (an earlier work) wasn’t as good, I still enjoyed it. This is Ichigo Takano’s latest series, so I am hoping for great things.

KATE: Hot guys playing the guitar–sign me up! My pick is Become You.

ASH: Eyup! I’m here for the musicians of Become You, too! Though if Queen Bee ever sees a print release, that’s another debut I’d be interested in.

ANNA: I’m going to be relentless in my love for shoujo, and pick Queen Bee as well!

MELINDA: Okay, I’ve gotta go with Become You. There’s a kid on the cover with a guitar. I’ve been promised childhood dreams. This is a winning combination.