SEAN: For a Yen week, this is actually pretty reasonable. Mostly as Yen moved a bunch of titles to the week after next, but hey.

Kodansha first, though. They’ve recently announced several new titles as digital releases. Deathtopia debuts next week, from the creator of Cage of Eden. This is a seinen title from Evening Magazine, and we’ll see if it’s as fanservice-laden as its shonen predecessor. It’s a thriller. 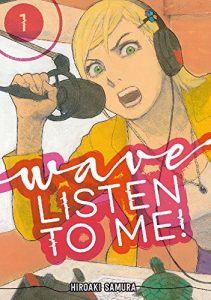 Wave, Listen to Me! gets the award for best title of the week. It’s an Afternoon manga from the creator of Blade of the Immortal. Fans of that series will be happy to hear this new one takes place… at a radio station?

ASH: I just found out about this series and I am incredibly curious about it.

MICHELLE: Oooooh! I especially like that the Kodansha site mentions “the beginning of an aggressive ramp-up in new digital manga series!”

KATE: Count me in for Wave, Listen to Me!, too. I’m a little biased — I teach a class on radio and television history — but I’m delighted to see a few grown-up options in the mix.

ANNA: I am officially intrigued.

SEAN: And this isn’t out in volume form yet, but a new series from the creator of A Silent Voice debuts next week with 10 individual chapters, which catches us up with Weekly Shonen Magazine. Called To Your Eternity (Fumetsu no Anata e), it’s more supernaturally tinged than A Silent Voice but apparently just as depressing.

Kodansha also has an 8th print volume of Forget Me Not.

Seven Seas surprisingly only has one title out this week, given how much they’ve been piling on the books lately. It’s the 5th volume of Nurse Hitomi’s Monster Infirmary. 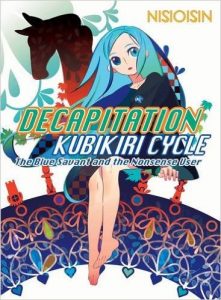 Vertical Inc. has the first volume of Nisioisin’s popular Zaregoto series, Decapitation: Kubikiri Cycle, though they emphasize they’ve only licensed this one volume, to tie in with the current Japanese OAV adaptation. It was actually released by Del Rey years ago; this is a re-edited version, and hopefully now that Bakemonogatari is popular it should see more readers.

And the rest is Yen Press. First off, a 9th volume of capital letter and punctuation loving Akame Ga KILL!.

The 8th manga volume of A Certain Magical Index wraps up the adaptation of the 6th novel.

Death March to the Parallel World Rhapsody is the runner-up for best title of the week. As for the content, it’s a story where a guy finds himself transported to another world, gaining impressive powers, and surrounded by beautiful… wait, why are you running away? “Transported to another world” is this year’s vampires! This is the manga, the novel is out one week later.

Fruits’ Basket Collector’s Edition reached Vol. 9, and get ready, because this is the one with THAT spoiler which shattered Furuba fandom forever.

MICHELLE: I continue to boggle that we’re up to this point already. But I also love that we’re still maintaining the secrecy of that spoiler.

SEAN: Horimiya has a 6th volume, and we’ll see if things advance on the romance front.

SEAN: I’ve enjoyed the light novel The Isolator, dark as it’s been, and so am pleased to see the manga adaptation is now coming out over here.

And there’s a 3rd volume of fantasy Liselotte & Witch’s Forest.

MICHELLE: I’ll be picking up this one, too. 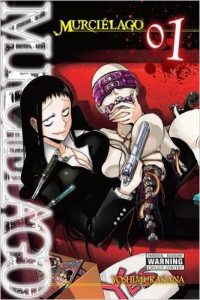 SEAN: Murciélago also debuts this month from Yen Press. It’s a Young Gangan title that is apparently SUPER violent, and has humor so black it causes you to redefine “funny”. And it also has a lesbian lead, though this isn’t your cute high school girls sort of lesbian. I’ve heard good things about it (it has the Erica Friedman seal of approval), but with lots of “it’s pretty sick” warnings.

ASH: I’ve heard good things, too, but it definitely won’t be a series for everybody.

MELINDA: I would describe myself as interested, but skeptical.

ANNA: Huh, I am always up for more fantasy manga.

SEAN: I was pleasantly surprised at how good I found the first volume of Scum’s Wish, though ‘pleasant’ is perhaps the wrong word for what’s going on with these kids. I look forward to the second volume.

SEAN: Taboo Tattoo has a 5th volume, and is very Monthly Comic Alive.

Today’s Cerberus sees a 2nd print volume, and is still cute and silly.

You can’t have a long list of manga without at least one survival game title, and there is is: the 2nd volume of Tohyo Game.

Lastly, we wrap up the 6th Umineko arc with the 3rd and final omnibus of Dawn of the Golden Witch. I’m not sure when the 7th arc will begin – Yen hasn’t scheduled it – but this volume at least resolves Erika Furudo’s role in the series… at least for the time being.

A lot of new stuff this week. What appeals to you most?