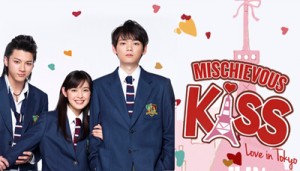 Mischevious Kiss: Love in Tokyo is available on Dramafever.

Anna: I tend to think of Itazura Na Kiss as one of those eternally fresh manga series just because it has inspired such a wide variety of adaptations in different countries, much like Hana Yori Dango (Boys Over Flowers). I was happy when the latest Japanese version was licensed since we don’t tend to get as many Japanese dramas as opposed to Korean dramas and I was also looking forward to experiencing the story of Itazura Na Kiss again. The basic plot about a dimwitted girl relentlessly pursuing a boy who is intellectually brilliant and emotionally distant is something that has been done over and over again in manga, but very few variations actually manage to pull the story off with as much humor and heart as Itazura Na Kiss. What were your initial thoughts about this series? Eva, I understand that you found this series stupefyingly boring! Had you also read the manga, or was this your first time encountering this story? I enjoyed the series quite a bit, but part of that might have been due to being able to see a live action version of a manga I’d read and enjoyed. 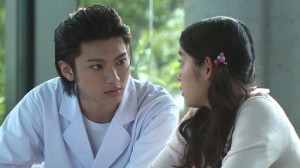 Nancy: I’m already a fan of the manga Itazura na Kiss, and I do like the Naoki in this version. All the leads were charismatic. I was also impressed with the adaptation until the last few episodes. I thought the story arc of Naoki’s little brother falling ill was done very well. Kinnosuke, Naoki’s rivals, also pretty much steals the show. I would definitely recommend it to fans of the manga.

Anna: I thought that for existing fans of the manga, the casting for this version was just really well done. There wasn’t a single character who I thought was miscast. I thought Kinnosuke was great, as was the captain of the tennis team. 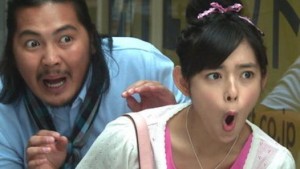 Kotoko and Sudou stalk the objects of their affection!

Emily: I’ve been a fan of the manga for years, and I also think they did a great job at adapting the story. They hit all the major milestones for the first half of the series. I really look forward to season 2. The casting was well done as well. I was a little bothered by the huge age gap between the leading actors – she is 16 and he’s about 25, but he convincingly fit in with the others and looked good with her. This is a very… shoujo manga… story that may not seem all that original to modern viewers, but I think it’s because this is the series that influenced so many other series after it. Yet at the same time, it does things other shoujo-manga series usually don’t do– it follows the characters into college. How refreshing to see the romance (or lack of) go beyond high school into the larger world of college life.

Eva: I am a fan of the manga, which may be why it was so tough for me to make the move to the live-action show.

I absolutely agree that the show was beautifully cast. Naoki is a perfectly dreadful person with floppy hair and an attitude. Kin-chan takes a healthy bite out of every scene he’s in. Kotoko is as silly and twitchy as she is in the manga. All of these are things I loved in the books and (except for the awesome Kin-chan) are things that made me tired while watching the TV show. Somehow Kotoko’s live-action lack of agency drove me crazy while the same lack of agency was endearing in the books. 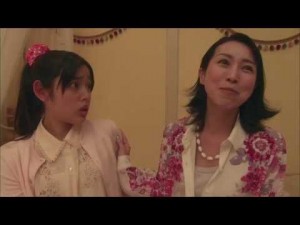 Anna: That’s really interesting! I didn’t have the same reaction, but I can see how something that is easier to take in manga format would become annoying in a live action format. Perhaps because the lack of agency in the manga can be resolved more quickly by moving on to the next chapter, but it might stick around for one or two episodes in the live action version.

Nancy: So that means it’s not just three to one, but four to zero, so people should give it a try. ;) Have we been keeping a record of our tallies?

Eva: Oh, I absolutely agree that people should give it a try. I wish more people would give the manga a try, too. I think it’s been tragically overlooked. But as we know from previous installments, my dumb-threshold is very, very low. Once around the dumb-bush was enough for me.

Anna: My overall reaction to the series was just that it was very adorable and heartwarming. The great casting, and the opportunity to see some signature scenes from the manga in live action format, like the tennis captain Sudou’s transformation into a demon on the court, or Kotoko’s horrible disguises as she stalks Naoki were very amusing. 4 out of 4 of us agree that you should give it a try!