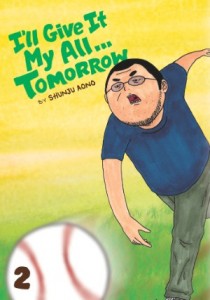 I’m not a big fan of squirm-inducing comedies like The Office; it’s hard to root for a loser who makes everyone uncomfortable with his general lack of self-awareness and humility. Yet The Office was undeniably compelling, even if it was sometimes hard to watch. The genius was in Ricky Gervais’ performance: he embodied a type that we’ve all encountered in our working lives, someone who felt small but used his job to make himself seem bigger or more important than he really was. Gervais never tried to make his character appealing in his vulnerability, and in so doing, forced the audience to confront the fundamental falseness of the lovable loser stereotype; we may feel better about ourselves for identifying with a decent underdog, but we probably have more in common with David Brent than we’d care to admit.

I’ll Give It My All… Tomorrow, an unsparing farce about a forty-year-old father who quits his job to become a manga artist, inspires a similar mixture of love and squick. Shunjo Aono makes no effort to endear his protagonist to readers; Shizuo is a loser with big dreams but terrible follow-through. Like many daydreamers, Shizuo failed to realize that his fantasy job would be just as grueling as the one he quit, a revelation that sends him into a tailspin of binge drinking, prostitution, and video gaming. The first volume’s blunt, unsparing tone yields some squirm-inducing moments that are just a little too truthful to be funny, such as when Shizuo bumps into his eighteen-year-old daughter at a love hotel or parties with younger colleagues.

As the story progress, however, Shizuo spends less time pretending to be twenty and more time writing stories. Volume two opens with a scene of Shizuo pitching an ill-advised story Murakami, the one editor at EKKE magazine who can tolerate Shizuo. Following the dictum of “write what you know,” Shizuo has penned “The History of Me,” an autobiographical comic depicting Shizuo’s ongoing struggle to find his true gift, the thing that, in his own words, makes him “different from other people.” It’s an exquisitely uncomfortable scene, as Murakami must endure Shizuo’s pompous editorializing, making it almost inevitable that Shizuo’s work will be rejected swiftly. Worse still, Shizuo’s journey of self-discovery is anything but; he’s failed at everything he’s tried — street tough, folk singer, salary man — yet hasn’t abandoned the delusion that he’s “too big” for the “little” opportunities he’s been given thus far.

In subsequent volumes, Shizuo’s progress remains fitful, impeded by his ego and his inexperience. When he does have an epiphany, it’s usually because he’s failed spectacularly and must rationalize the choices he’s made. In volume four, for example, Shizuo is assigned to a new editor, Aya Unami. After reading his latest excruciatingly autobiographical manuscript, “Live to 300,” she promptly tells him, “I think you need to know when to give up.” Oguro is initially stunned, but soon realizes that Aya might be the only person with the vision and honesty to help him improve. Whether she’s willing to coach him, and whether he can accept her guidance, however, are a different story; it’s hard to imagine Aono treating this moment as a major breakthrough in Shizuo’s journey from amateur to professional, the first meeting between a gifted natural and the coach who will lead him to stardom.

The artwork mirrors Shizuo’s skill level and emotional maturity: the lines are thick and imperfect, the shapes are basic, and the characters’ bodies are awkwardly proportioned. Shizuo has an enormous, round head that seems ill-suited for his body, and tiny eyes that remind us just how myopic he is in every aspect of his life. (See “bumping into teenage daughter at a love motel,” above.) In a particularly skillful touch, Shizuo’s own drawing mirrors that of Aono’s, only executed with less command of line and form — a subtle reminder that the prevailing aesthetic of both stories is meant to reflect how Shizuo sees the world, not an artistic failing on Aono’s part.

I’m probably making I’ll Give It My All… Tomorrow sound like a colossal downer; after all, it’s hard to laugh at a character who seems so pitiful. Yet for all Shizuo’s self-aggrandizement, there’s something honest about his efforts, and that’s what makes this squirm-inducing comedy readable. We may do our best to be responsible — to hold good-paying jobs, pay our mortgages, and raise our children to be good students and citizens — but for many of us, a soft, nagging voice asks, “Is that all there is?” Shizuo’s decision to act on that doubt isn’t wise or noble, but it’s testament to a deeply human need: to create meaning out of our experiences, and to find proof that our lives are intrinsically interesting to other people. Recommended, though you may want a stiff drink afterwards.